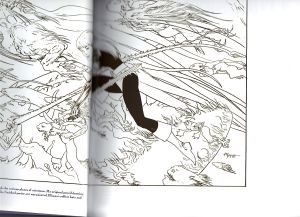 In 1985, Kaulta sketched Magik.  He references the finished project :

Sorry for not having a better image of the sketch, the sketchbook is pretty large.

That finished product is amazing.

Other sketches include – Man-Thing, Green Hornets, eight pages of Rocketeer, Spider-Man and various covers for Marvel including Fear Itself and Chaos War.

Featuring the artwork of :

Warren Ellis’ name is on the cover but as far as I can tell, he’s only being given credit due to the fact that Bianchi wouldn’t have anything to draw unless Ellis wrote it for him to draw.

Larroca, also from what I can tell, only provides the designs of the new X-Men Headquarters in San Francisco, that they used for maybe a year before Utopia.

I thought the image from that shirt I want to own came from this but it must have been either an original work or from some other source that I can’t track down.

I’ve kept this special for this one page : 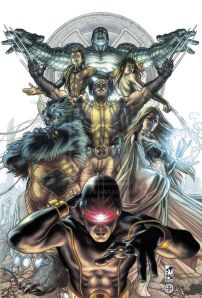 This was meant to be used for a promo piece.  I’m sure Bianchi drew Kitty first, showed to some editor and before he could draw several pages of her, they had to tell her hat Joss Whedon was going to abandon her in space for what will be three years before Matt Fraction saved her and Whedon’s run.