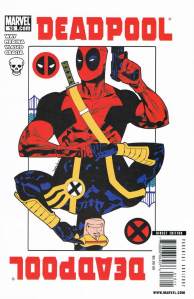 Want You to Want Me : Part Two of Four

I must have been reading this series, but I don’t recall much about it. 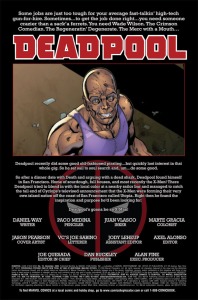 Here is what happened in Part One.  Essentially, it tied up anything from the previous storyline and ended with Deadpool watching Cyclops’ big speech that all mutants are welcomed on Utopia.  Deadpool wants to be an X-Man! 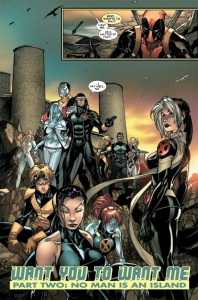 Right off the bat, with the first page, we have the reason why I bought it and maybe the reason why I shouldn’t.  This goes back to my issue with how Magma and Magik look similar, from a distance.  Typically, Magik has bangs and Magma doesn’t.  Magma usually has basketball sized breasts and Magik . . . doesn’t.  The Blonde, in the New Mutants costume, looks like the confusing combination of both, that we get from time to time.  She doesn’t appear later, so this is one of those, take it or leave it, situations.

comicbookdb agrees with me but Marvel Database believes it is Magma.  Now, to be honest, I was probably the guy who listed Magik, on the comicbookdb but no one has corrected that, so I still stand by it.

Deadpool asks Cyclops if he can stay on Utopia.  Cyclops says “hello no” which is super understandable.

Later That Day.  Wolverine tells Cyclops that wasn’t the way to handle Deadpool.  Dagger is there, as this is after the Dark X-Men.  Has her costume always been that revealing?  I know it has been but Medina has drawn her with larger breasts so it seems even more mature.

Dagger, proving how much of an outsider she is, says that people say the same thing about Wolverine.  How she is even in the same room with these two, I’m not even sure.  Dagger further points out that isn’t this the point of Utopia, to take in those who the world doesn’t want.   Dagger, looking outside, states that most mutants (at this point) have checkered pasts, and they are accepted here.

Meanwhile.  Deadpool is upset as the X-Men are hypocrites.  I’m reminded of why I didn’t like Way’s run.  Deadpool has his classic yellow narration boxes but now he has this second white narration box, running commentary as well.

Brian Cronin explains what that was all about –

which seems confusing to me but I’m not aware of who Madcap is.

Deadpool decides he’ll show Cyclops some of his sweet moves.  Just then, Mercury’s father – Ellis Kincaid – goes on live television and declares that the X-Men are keeping him away from his daughter.  The United States government are powerless to do anything, so he is trying to bring media awareness.

Cyclops is watching this, standing behind a sitting Prodigy.  Prodigy explains how Mr. Kincaid has been on financial hard times.  That is, until Norman Osborn bought out his businesses.  So Kincaid is working for Osborn, who is still upset about losing to Cyclops.  Cyclops doesn’t recognize the last name, Kincaid.  Luckily, Mercury comes into the room, apologizing for her father.  Turns out, Ellis has been the definition of a deadbeat father and barely has any connection to Mercury.  She’s afraid of being kicked off Utopia but Cyclops isn’t going to play that game.  It is a simple matter of having Mercury emancipated.  He’s going to call Angel’s lawyers and get them working on that.  A couple exchanges of paperwork and this shouldn’t be a story, after a few days.

There is an ad for Halo 3 ODST, I only played a little bit of it – I didn’t see the big attraction to the game franchise.

Deadpool has found an abandon warehouse and starts preparing to take out Mr. Kincaid.

Cyclops and Wolverine enlist Domino to seek out Deadpool.  These Domino pages, the bulk of the rest of the issue, are delightful! Domino is confused, as she has bad history with Deadpool but Wolverine believes that makes her perfect candidate.

Deadpool is sitting up his sniper post and completely ignores Domino, as she tries to offer him a place on Utopia.

Utopia, later that day.  Domino is telling Cyclops the story of what happened next – as we see the events unfold.  Deadpool takes note of Domino, finally, and threatens to kill her.  He is under the impression that she was sent here to kill him.

There is a half page ad for Sentry’s guest spot in Moon Knight 2, by Gregg Hurwitz and Jerome Opena.  Coming in October 2009.  There is a full page ad for Wolverine : Weapon X 6 by Jason Aaron and Yanick Paquette.

Early that morning.  We see Deadpool is making 372,944 pancakes.  Back to Domino, Deadpool forces her to walk on top of a sky light.  He breaks the glass under her feet and we see her land on the pancakes.  To which, she slaps Cyclops for making her even go through any of this nonsense.

One of Deadpool’s conditions of joining the X-Men, is that he wants to be able to wear his own X-Uniform. Essentially it is one of the New Mutants costumes, but with Deadpool’s name on the back – like a jersey.

Deadpool still wants to show Cyclops his moves, so he reveals to Domino that he still plans on killing Mr. Kincaid.

There is a full page ad for Incredible Hulk 603, by Greg Pak and Ariel Olivetti – which has Bruce Banner, Hulk’s son Skaar, Wolverine and his son, Daken.

Either the next issue or the conclusion has this fun moment when Deadpool makes a reference that Domino completely gets and this frightens her because she is getting a glimpse of how his brain works.  I no longer own that issue but this was a fun arc. 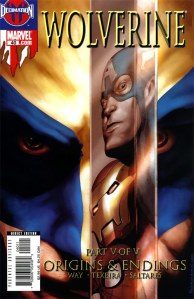 Captain America and Iron Man are only on the cover.  The cover is done by Kaare Andrews.

Winter Soldier appears in the present as he tells Logan that he killed Logan’s wife, Itsu – the mother of Daken.

I own this issue due to Ogun being named by Logan to his future clan master. 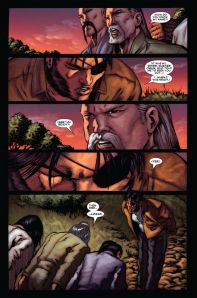 In the process of proving himself to his new clan, and thus the right to raise his son, he has to go through a special dance. The dance appears as if the combatants are attacking him, so he can’t fight back.  Then the volcano explodes a little, in Logan’s moment of being distracted – he pops his claws, stabbing one of the men. With that, he leaves the clan a disgrace.  The worthy men will raise his son.

Logan decides, he must see Itsu one last time, he heads back.  He recognizes the scent of her blood (weird?) and runs to her cabin.  She has been shot.

This clan is the peaceful one.  Up on the mountain, is the more violent clan.  This clan, Logan joins so that he can be made into a better weapon so that he can get his revenge.

Since Winter Soldier has told Wolverine something he didn’t know before, he tells him a secret.  But we the reader don’t get to hear it.

This story takes place during the Decimation era, which takes place as soon as House of M ended.  House of M, for Wolverine, is where he obtained all of his memories, every single last one of them.

Issue ends with him going back to the clan on top of the mountain, to receive the Muramasa, a sword.

As a Chrono Trigger fan, I’m glad it wasn’t the Masamune as Wolverine isn’t worthy of that sword.

There is an editorial page explaining that this story continues into Wolverine Origins and this title is going to deal with Wolverine’s new adventures whereas Origins will deal with him delving into his past.  He’s going to get some answers.