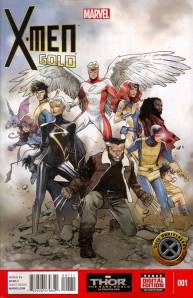 Now this is how you celebrate the X-Men’s 50th Anniversary.

Look at that gorgeous cover by Olivier Coipel.  That would be a pretty good lineup as well – Kitty, Lockheed, Gambit, Angel, Jean, Bishop, Cyclops, Jubilee, Wolverine and Storm. Someone for everyone.

This issue has five stories, but only one of them has Kitty and Lockheed, and that is the main attraction.

This story takes place between Uncanny X-Men 173 and 174.  Bob McLeod is a legend – he gave us The New Mutants, after all.  But how much better would this story have been with Paul Smith on art?  After all, he was that era’s original artist.

This story also proves that if you give an older artist a modern colorist, their style still holds up. 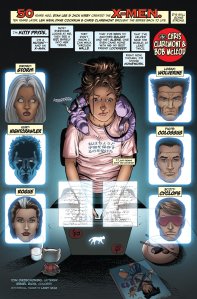 Lockheed is sleeping on Kitty’s shoulders while she is doing homework.  She is also feeling bad about Logan’s failed wedding.  She starts talking aloud about it and this is when Logan sneaks up on her.

A warning alert happens, Sentinels in China and they wake the team.  The two spread where she informs the team, looks as if Steve Dillon drew it.

Since this is takes place after the wedding, the Starjammers were in attendance and are giving the team a lift to China.  Scott still is deciding if he wants to join his father in space.

Kitty is wearing that blue and white unitard, with that exta white cloth around her shoulders, not sure what you call that item.  She is talking to Rogue and was about to touch her, when Rogue warns her not too.  Kitty isn’t wearing gloves, but Rogue is fully covered besides her head, nothing to worry about.

In China, there is a giant Sentinel.  So giant, that it is capable of manufacturing proper size Sentinels – which are giants themselves.  It is like an action Master Mold.  The Sentinels it creates, can adapt to the situation.

Colossus and Wolverine are too small, so their punches have hardly no effect.  Rogue flies in and tears off an arm.  That arm targets the Starjammers.  The Starjammers are now busy defending themselves against a group of Sentinels, in space.  Lilandra is quick to don her battle armor.  Even Madelyne gets into the action and starts firing a turret.

Kitty remembers her power ruins machines, as Cyclops put her on civilian duty, he doesn’t have much experience with her at this point.  I can see her not speaking up.  She starts fighting Sentinels, as does Lockheed.  His flames look amazing!

Kitty comes up with a plan – daring but also odd.  She is going to phase into Wolverine, Colossus is going to twirl the combination, Lockheed is  going to burn all three of them.

It looks cool, all three are in extreme pain, but it works.

Storm sets off a massive lightning storm and this fries all of the Sentinels.  The team heads back to the Starjammers for drinks.

Cute story about Beast, Iceman and Angel making fools of themselves to try to win a date with Jean.  Cyclops, at Xavier’s demand, shuts that party down.

Story about Banshee and Sunfire in Memphis.  The story would be better if it didn’t imply it took place two days before Giant Size X-Men 1.  That seems silly, but it leads into the next story.

This takes place right after Cyclops is introduced to the All New All Different X-Men team, during Giant Size X-Men 1.  The story is essentially, how would Wolverine kill all of these characters.  The answer is, with his claws.  You also get his first impressions of the team members.  Funny caption about how Thunderbird is Wolverine without the cool powers.

This story takes place within Magneto’s mind as Xavier shuts it down in X-Men 25.  Pretty cool how Xavier wants to give him one last happy thought, even after Magneto has ripped out all of Wolverine’s adamantium.  Reed Richards is there for some reason.  Bastion is in the audience, hinting at Onslaught is coming.

Tom Orzechowski was very busy putting the words into this issue.

Issue ends with short reprints from both Amazing X-Men 1 and All New X-Men 18.  How anyone who reads that snippet from 18 and not buys that issue is insane. 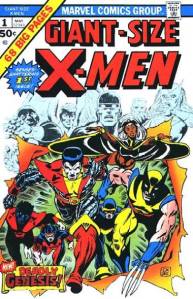 When people state legendary milestone comics, this is actually one of those comics.

I tried to see how much I spent on my copy, could not have been more than $45.00.  I wish I could scan some of these pages.  It is very readable, it just happens that a cat got to it and nibbled on the bottom right corner.  I never intend to sell this issue, I just wanted to own it.

I looked and looked to verify that this is a first printing and not a Target reprint.

So it is a first printing, just a readable copy, so I couldn’t get more than I oaid for it probably.

This makes me want to look into getting a poor edition of Uncanny 1, but I bet the same quality version of that, is still $200.00.

On the opening splash page of Chapter One, is the only time we see Beast.  He us referenced later.  Cool looking image of the original team and the all new team.

Now that I’m thinking about it, not sure where the All New All Different expression comes from, maybe issue 94?

This creative team goes all out in these introductory pages.  They may not have plan for the success that started here, just trying to revive a dead franchise and increase international sells.

We are first introduced to Kurt Wagner on page two.  Has it ever been revealed what he did to get them chasing him?  Besides him looking the way he does?  The foolish town people are quite organized by the time we join this story.  I want to say in that X-Men Manifest Destiny Quitting Time story, Kurt may have given some back story.

Xavier stops everyone and offers Kurt a chance to be whole.

Wolverine appears on page 7, and joins on page 8.  The bottom of the left pages all have one sentence descriptions of other Marvel titles.

The Canadian government invested a great deal of time and money turning him into what he is, indeed.

Poor Banshee gets two panels, and he is on the team.  We get introduced to Storm, on page 9.

At this point, Xavier is the only one we see, is he flying back to the mansion between each stop and dropping each one off?

Have we ever seen what Storm was up to the week prior to this?  She is clearly invested into the goddess position.

She is the one giving up the most.

Sunfire also gets two panels, one is wide screen.  Makes sense as those two have made appearances already elsewhere.  Plus, they are not sticking around to long, in Sunfire’s case. 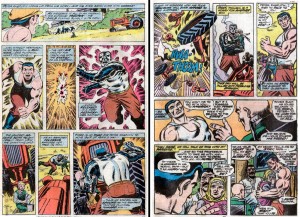 Illyana Rasputin is mentioned on page 11 and seen on page 14.  Oh that poor little girl.

The captions from page 15 were reused for Uncanny 390, in a very touching fashion.

Page 16, we start getting racism into the comic.  We were all having a good time, then John Proudstar shows up.  He really doesn’t like white folks.

Xavier gets racist too, and that actually convinces Proudstar to join.

Spider-Man and Valkyrie in Marvel Team Up 341.

They get their costumes!

Well, three of them do.

Storm is surprised they fit perfectly.

Page 22, we start the flashback to Krakoa.  We see the original X-Men, minus Beast, plus Havok and Polaris.

Cyclops is so mad at Beast, then he gets even angrier at Iceman’s jokes.

Cyclops splits the X-Men into duos

I wanted to reference the sentence descriptions with issue numbers that I missed:

24, witness the frightful fate of Glenn Talbot in Hulk 188

30, the shattering secret of the Falcon — revealed in Captain America 186

So the four teams take a direction and all meet in the middle of the “island.”

Page 37, we see what happened to the original X-Men.

We see Krakoa for what he really is!

42, who will be drafted in the search for the new Avengers?  Find out in issue 136

So a pretty spectacular battle rages on with 13 X-Men.

Without Storm and Polaris, not sure how these teams would have survive.

Second Genesis is 47 of the 68 pages, the rest are origins and powers of the Original X-Men, minus Beast and Angel.

The order of the back ups is : Cyclops, Iceman and Jean Grey.

They must have known they were not going to be using Angel.  Not like they wound up using Iceman either.

All in all, a fantastic issue and officially the oldest comic in my collection.