I own this issue due to the opening page. 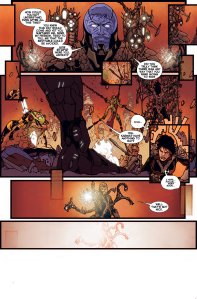 Doug is having a nightmare where he is all powerful (from that last major storyline of the third volume of New Mutants).  He has killed the New Mutants.  Including Magik, who was run through with her own soulsword.  Not cool, Doug!  Not cool!

Doug wakes up with a fright.  He can’t keep living like this, and contemplates ending his life.

He opens the door after deciding how he will do it, to find the All New X-Factor waiting for him.  In previous issues, they have been investigating Magus, Warlock’s father as he has been causing problems for Serval – the company that sponsors the team.

Danger scans Doug and sees that a piece of Warlock was left behind.  Doug tells her that isn’t possible.  She goes ahead and plunges two fingers into his chest and pulls out the piece of Warlock she was talking about.  Warlock has been monitoring his dear friend.

Doug is able to see the wavelengths, so now he knows where Warlock is – Houston, Texas.  So the team, with Doug, goes there.

In a great show of Quicksilver’s powers, Polaris is in the middle of a sentence – this sequence is broken over three panels – and the middle panel is her mid sentence and the final one is him coming back as she finishes her comment.  That’s how fast he is.

The building he investigated doesn’t have anything, then the ground moves and out comes the giant factory.  Magus welcomes them inside.

The team as of right now is Gambit, Danger, Polaris and her brother, Quicksilver.

Meanwhile, over at Serval – Mrs. Snow, who is married to the president of the company – wants to have have lunch with her husband.  He needs a minute to wrap up some business.  Mrs. Snow speaks to his assistant, Linda, and Mrs. Snow accuses Linda of sleeping with her husband.  Linda denies it.  Mrs. Snow tells her that she already knows and things will be easier if Linda just confesses now as it will not end well for her down the road.  Linda stands firm.  The Snows leave and I am left with the impression that Linda is having sex with Mr. Snow.  Which is so lame and predictable.  Just don’t cheat on your wife.  Come on, already!

Back with Magus, as he is giving a tour of his factory.  The humans that work for him are not being mind controlled.  They are paid a fair wage, things are good.  X-Factor is there as Magus is cutting into Serval’s profits.

Magus updates the team (and me) that the planet he is from, where all of the Phalanx are from, has been destroyed.  The few that remain on Earth, are the last of the species.

Magus also tells them that he is no longer trying to kill his son, Warlock – as their tradition states (one of them has to be killed by the other) – and that Warlock is helping him at the factory.

Warlock comes out, sees his self-friend Doug and they are united after a while of not seeing each other.  Doug confronts him about the tracking unit.  Warlock was worried for his friend, as he suspects Doug is having suicidal thoughts.  Doug denies having any sort of thoughts of that regard.

Danger is tired of all of this jibber jabber.  She didn’t bring Doug there so that he can have a nice chat with Warlock.

There is a fun scene where Warlock hits on Danger.  She isn’t interested.

Warlock wants to join Doug in his new adventure with X-Factor.  Warlock asks his father if that would be okay.  Magus loses his mind and after yelling for a minute, agrees to let him go.  Which I completely get that, that’s all I want to do sometimes, is to vent and then still do what I’ve been told to do.

Polaris is surprised that they are going to just let Magus continue his goals.  Quicksilver points out that the only reason Magus attacked them in the past is due to them attacking him first.

So X-Factor has gone from three members to five.

I’m going to keep track of this series and see if Magik shows up again in more dream sequences or an actual appearance.