Issue opens, last year.  The Battery – Charleston, South Carolina.  This married couple Matt and Julia are having a fight.  They were on a trip and he brought his computer (work) with him.  While fighting, Skrulls attack and kill her and destroy the bed and breakfast they were staying at, that most likely, their child was staying behind at.  But did they bring a third adult to watch the kid or is the child back at home and safe?

Today.  New York Law of Jennifer Walters.  She is on the phone with someone.  She stumbles on a website stating – She-Hulk and Hercules, Walk of Shame.  Which I like how Marvel shows that she is a sexual woman, but they don’t need to harp on the negative side of effects of that, or make jokes about it.  She’s single and in the city, let her be.  She gets an envelope and is taken by surprise.

Emma and Magik, with Magneto, are trying to help Dazzler deal with what has happened to her.  They are certain that Mystique is in hiding.  If they were sure that she was around, Magik is confident that she could create a spell to reveal her.  Surprised it took someone this long to think of that.

Sorry, couldn’t find one with the lettering but pretty much, if you read AvX 11, you know this scene.

See that tiny lady by the tunnel with her arms crossed?  That’s Kitty!  Looks like the All New X-Men are having a snowball fight.

Cyclops is looking at their Cerebra.  He’s remembering his last exchange with Xavier, his last words to him were – You are not my father.  Which I can only imagine he said as smugly as possible.

Tempus comes to him, to check on how he is doing.  He still feels out of sorts from the Nano-Sentinels.  He asks her what happened to her in Tabula Rasa.  She still isn’t ready to talk to him about it.

Like a dick, he tells her that the Cuckoos already told him and he’s been waiting for her to confide in him.  So maybe the Cuckoos are the dicks?  But that’s sort of the line they walk, so I can’t say I’m surprised.  So that’s Tempus, the Cuckoos (who she told them to keep quite about it) and Cyclops who know – but we don’t and I read that there is an annual that will come out, eventually, that explains it.

Tempus is older now.  Though I can’t tell, except that her hair is longer.

Tempus is mad at Cyclops for knowing and for telling her the way that he did.

The Jean Grey School for Higher Learning.  Westchester County.  The first panel is She-Hulk crash landing into the ground.  Did she jump from a plane or something?  Seems like she could have just walked out and gotten someone’s attention.  Weird

She-Hulk has the Last Will and Testament of Charles Xavier and needs the X-Men to gather.

The away team comes back.  I like how Triage’s first question is if anyone needs healing.  He knows his role on the team.

Cyclops wants to know if Dazzler is joining the team, I guess he has a website he wants to update.  He asks Emma and Magik if he should talk to Dazzler, both of them saying, No, is a fun moment.  Scott Summers, not one to make a situation better.

Emma tells him that he wants to talk to someone, he should talk to Hijack.

Before he does, he asks Magneto if he is joining the team again.  That website needs attention!

Cyclops and Hijack have a nice conversation. 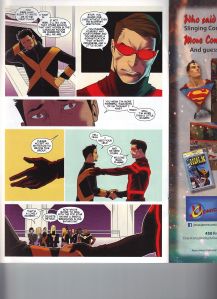 Hijack is back on the team and may be the strongest member of the team.  See that bottom panel?  Goldballs is in his classic uniform, that’s pretty awesome!

Dazzler is in the bathroom.  She sees a pair of scissors and her eye shadow is all over the place.  Oh Dazzler, I’ve seen the cover to the next issue, don’t do that to yourself!

Newberry, South Carolina.  Today.  Matt runs into his sister-in-law, Alana.  She wants to see how he is holding up but he doesn’t want to talk about it.  He gets angry at her and explodes.  So now his poor in-laws have two dead daughters.  That guy needs to be put out of his misery!

Jean Grey’s School for Gifted Youngsters.  In a terrific comic book scene, She-Hulk asks if Xavier is dead or dead dead.  I can’t imagine superheroes even have wills, as they may come back in a year and would want their stuff back!  The rule should be, if they are not back in five years, then read their will and hand out their stuff.

She-Hulk needs everyone named in the will needs to be present for the reading.  Which means – Storm, Beast and Iceman, have to invite Cyclops to the reading.  Which really, should not be a big deal.  He was just there and they seem to have ended the story on a high point.

Also, don’t be babies about it.  Jen needs to read the will to those present so just let her do her job!