The story that finally tells what happened to Tempus back in Uncanny X-Men Volume Three Issue 17 and what Cyclops already knew what happened as we learn in Issue 23 – the Cuckoos told him.

Hopefully this means that she can start appearing in Uncanny again as she has gone into the background as of late (though most of the students have).  Which makes sense as Bendis wouldn’t want to keep dealing with the characters talking about a story that us readers have not seen yet.

This story continues into the All New X-Men Annual but Magik doesn’t appear in that one.

Issue opens Tempus bouncing around time.  She starts with being far into the future, the future with Jonathan Raven.   Next, she bounces to the far past of 1875.  The days of Rawhide Kid, not sure why Bendis didn’t go with Two-Gun Kid, that would have made more sense.  Man, I can really go for a proper sequel of Blaze of Glory.  Apache Skies, was meant to be a sequel but it wasn’t the same.

I do like that Bendis didn’t make Rawhide Kid overly gay like Ron Zimmerman tried to portray.  Rawhide learns that Tempus bounces when her life is threatened so he pulls his gun on her.  She time shifts out of there and we see that he was only merely threatening her.

Finally, she bounces to 2099 and we get a page of X-Men 2099 but I don’t know any of these folks.  I had several of the action figures back in the day but I’m sure I played with those toys wrong with barely the knowledge that was on the back of the card.

We learn that Magik is alive and well in 2099.  If only she was part of the X-Men 2099 original line of comics, I would have bought those.

We see that somehow, Nightcrawler, is also alive in 2099.  Also?  He is the Wong to Illyana’s Sorceress Supreme. 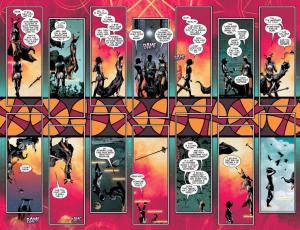 Is Doctor Strange not the Sorcerer Supreme of the entire galaxy?

Magik could really relate to bouncing around time as she and Dani did it for a while.

Poor Magik has lost her mutant power so she only has magic to rely on now.

Seven Years Later.  Which is a very long time.

Tempus has a husband and child now.  I really like Illyana being so warm to their son. 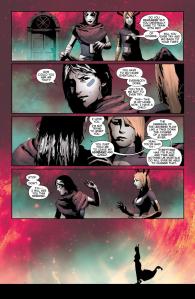 Magik asks when Tempus is going back to her proper time era, which upsets Tempus.  She has a family now.  I get the impression that Magik has not brought up the topic before.

We don’t learn the names of her husband or son.  As they are chatting, the boy is hungry, a giant explosion occurs. 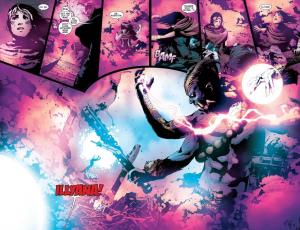 Eva keeps calling Illyana, Dr. Rasputin.  I guess it works like when Brother Voodoo became the Sorcerer Supreme and people started calling him, Doctor Voodoo.  To which, I am pretty sure, the title of ‘Doctor’ is not also given with the other title.

As much as I hate Magik being wounded, her line about being ‘wounded unfavorably’ is pretty amazing. 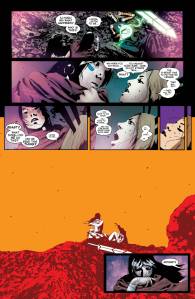 Poor Illyana Rasputin, the Sorcerer Supreme of the Galaxy, dies in her first appearance.  What happens to Nightcrawler, now?

Magik’s final words is a warning that Beast needs to die, so that’ll be interesting to watch.

Tempus’ family shows up, while the giant man person is still on the battlefield.  He is about to kill her when she time bounces to the dinosaur times as a triceratops comes at her.  This is how the issue ends.