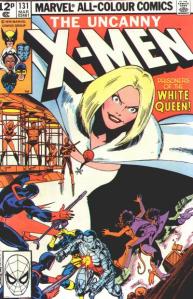 Aided and Abetted by

This is the last issue of the Dark Phoenix Saga that I own.  One day, I need to own Uncanny X-Men 132 but one of these days.  Today, we are celebrating Mother’s Day with Terri Pryde’s third appearance. 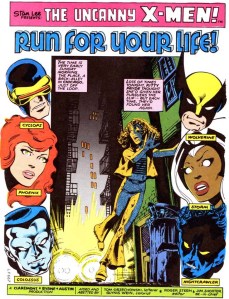 This is also Kitty’s third appearance, not that much of a coincidence.

Issue opens with Kitty on the run from the Hellfire Club soldiers in Chicago.

Luckily for Kitty, she was able to call Nightcrawler in New York City (as the team split in two, one team for Kitty and the other team for Dazzler).  Poor Kitty has been running for a few hours now.  She collapses to the ground.  Phoenix appears and demolishes the soldiers’ car.  Seeing this spectacular display of power, scares Kitty and she tries to run away again.  Nightcrawler teleports in front of Kitty, grabs her and crawls up the wall.  As it is seen on the cover.

Cyclops and Dazzler catch up to Phoenix.  Cyclops can’t believe Phoenix destroyed the car but she feels justified due to how scared Kitty was.  Kurt signals to the rest of the team that he is on the roof.  Phoenix lifts all three up to the roof.  Kurt reveals that Kitty phased through the roof.

Phoenix tracks Kitty and finds her.  We get the classic hug from Phoenix and Kitty, the only real interaction Kitty has with her.  The moment is recreated in All New X-Men 6 and 11, where Kitty hugs the teen Jean Grey.

Dazzler can’t believe how different her life is, just within the 24 hours.  Cyclops bandages Kitty’s cuts.  Phoenix reads one of the guard’s mind and gets caught up on what has been happening behind the scenes.  The X-Men make up a plan of action.

The guards bring in a tied up Phoenix and Dazzler.  Emma is messing with Storm’s mind.  So great seeing how this rivalry begins.

Kitty works her way to where the last place she saw the X-Men that brought her.  Wolverine and Colossus are still in those hanging cages.  It looks like Kitty is wearing a genetic version of a Fantastic Four uniform.  Blue pants and shirt, white belt with matching gloves and boots.  Cyclops gave Kitty a list of priorities.  Save Storm first, then Wolverine.  Storm isn’t there so she frees Wolverine.  Even Cyclops knows how useless Colossus is.

The cages are meant to keep the X-Men dopey.  Kitty tries to get Wolverine on his feet, while she is trying that, some jerk guards blast Kitty with a stun ray.  This makes Wolverine quite angry, and no one likes him when he is angry.

Back in the car, Phoenix is using her powers to make it seem like the X-Men are prisoners but they are not.  Dazzler creates a blinding light and the rescue plan is a go!  Not only do we get Storm and Emma, the Phoenix also confronts Emma.  By confronting, I mean, Phoenix completely shuts down Emma and leaves her like how she will eventually leave Mastermind.  Emma’s mind is a wreck after this, for quite some time.

Wolverine and Colossus, who is carrying Kitty, finally end up with Cyclops and Kurt.  Cyclops checks on Kitty, she’s okay now.

The team is finally reunited.    They head back to the Pryde home.

I love the above panel so much!  It just captures my imagination.  When I first saw it, I just kept moving my eyes over each character.  Such a great job with the stances and poses.

Dazzler turns down Xavier’s offer to join the team.  Where was Xavier during all of this?

Kitty’s parents are so glad to see their daughter again.  What did Xavier tell them had happened?  Its been days since they saw their daughter.  They were suppose to just get some ice cream.  I’m sure there was news reports on the attack at the malt shoppe.  Carmen is in his full right to be angry.  Then he just calms down and agrees to have Kitty join the school. 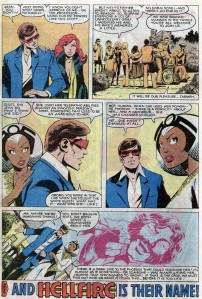 Phoenix straight up pulled a Classic Xavier and did some mind manipulation.  Which is pretty insane as, essentially, the X-Men just kidnapped or stole Kitty from her parents.  Where is that What If where Kitty just stays home?

Issue ends with the X-Men needing to take the fight to the rest of the Hellfire Club.  Storm mentions how there is a dark side to the Phoenix.

Back cover ad is for the original Star Trek Motion Picture, it isn’t very good.

Happy Mother’s Day to my wife, my own mother and all of mothers out there!  None of us would be here, without you.  Literally