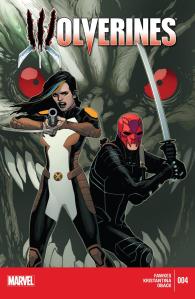 I still need to get a copy of issue two and Shogun didn’t show in three but I’m sure we’ll get by okay.

Barcelona, Now . . . Fantomelle is a new character introduced last issue, she is a master thief.  She is being confronted by Siphon, the villain first seen in Logan Legacy 7.

Shogun, X23 and Skel are there for the assist.  Fantomelle has a mental connection to her fox, Culpepper – get it, because foxes are so cunning.  Skel tackles Siphon, he doesn’t have a healing factor, so he has nothing to lose.

For some reason, Kristantina has decided to not show Shogun’s head or upper chest.

Fantomelle escapes with her fox.  X23 gives chase, having to shout at her that they are not there to hurt her.

Mystique blasts Fantomelle with a type of stun gun, I believe.  Shogun starts cutting into Siphon.

The villains bag Fantomelle and her fox.  Mystique keeps calling for Shogun to stop fighting.  They put in a few more hits on Siphon and destroy the hospital or business building.

Fantomelle wakes up, the fox tells her that it has been hours.

Mr. Sinister’s Fortress.  The villains are hoping she can still back Wolverine’s statuesque body.  We cut to Daken, who thinks he should be dead as he is still missing his right eye and left arm.

Fantomelle runs into Neuro, who reveals the name of this place is, Changeling.  Which Mystique said that earlier in the issue but I didn’t know what she was referencing.

Sabretooth is talking to Lady Deathstrike, who apparently Mystique is setting up to die – which must be super awkward to know about.

Shogun promises that if Fantomelle wants to leave, she can – she isn’t a prisoner.

X23 states what I was thinking, that Sabertooth is seen in two conversations at the same time.  I feel silly now, as it just dawn on me that one of them is clearly Mystique.  Probably the one harassing Lady Deathstrike.

Is Sinister in the same location as the villains?  Why show us a full page of Sinister’s fortress and follow that up with Fantomelle waking up?  Sinister should be breaching Wolverine’s adamantium shell within the hour. 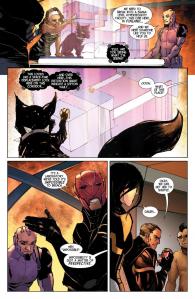 Neuro tells Fantomelle that the place they need her to break into is in Finland.  The fox recognizes how high tech the security is.  Shogun reveals that the place is known to be impossible.

X23 tells Daken that they ran into Siphon, he is annoyed as he wants his revenge on him.  I like the subplot of Sabretooth wanting to play cards with Daken.

Sinister is muttering to his lackeys that nothing is impossible or impenetrable, so he was told some bad news, I take it.

Mystique is crying and punches a mirror.  She gets a secret audio feed into the situation room.  There is a note on her mirror that looks like it states “Don’t Trust Sabretooth.  Skel must be cured by Sinister.” 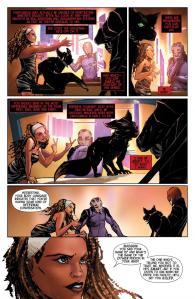 Took me until the third panel before I realize that it was Ogun speaking to Sharp.  Ogun views Skel, Junk and Endo as the most expendable members – and I would have to agree.

Fantomelle can tell that Shogun has two voices in his head.

Mister Sinister’s airspace is invaded and he instructs one of his lackeys to jump ahead three hours and continue with the project.  I don’t live that type of life.

Issue ends with the villains, is there a better name for the group?  Wolverines / Weapon X Program rejects, seems too long and complicated.

Apparently Mister Sinister is set to bring Wolverine back to life, which I take it, the villains don’t know that is his ultimate goal.