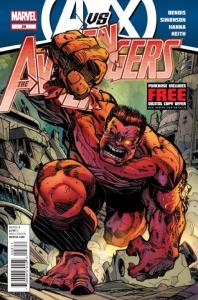 This issue comes during the fallout of Issue 6 of AvX.

I own this for the Magik appearances.

Inside front cover ad is for the computer game, Super Hero Squad at HeroUp.com, which I tried but my computer at the time wasn’t strong enough for it.

This issue is all about Red Hulk.  Issue opens with him reflecting on Avengers vs X-Men and his role in it thus far.  He fought Juggerolossus and Iceman.  He recalls the last meeting Captain America held.  Red Hulk is really General Ross, of Hulk fame.  He picks up on a slight hint of air that Cap wants Red Hulk, Rulk, to take actions into his own hands.  Rulk plans to assassinate Cyclops.  Except that this is at the point of the event when Cyclops, Emma Frost, Magik, Namor and Colossus are the Phoenix Five. 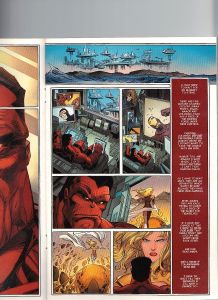 After doing some reconnaissance, he plans on attacking when Cyclops and Emma Frost are separated.

This is what he has to say about Magik – he hates magic.  He can’t fight random chaos.

Emma leaves and Rulk is on his way to Utopia.  I didn’t know he can transform back to General Ross.  He dons a traditional black assassin outfit.  Once on the island nation, he spies Magneto.  Good thing that his knife is made of bone and his gun is made of fiberglass.

He finds Cyclops and gets ready to make his sniper shot.  Before he can pull the trigger, he can’t.  Emma is back and his controlling his hand.  Emma comments that she is confused by Hulks never ask telepaths to just turn off their Hulk triggers.  General Ross tells her that it doesn’t work like that.  He Rulks out.

The Amazing Spider-Man film is coming out, as there are two pages of ads, in a row, for Spider-Man toothbrushes. 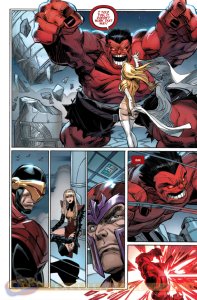 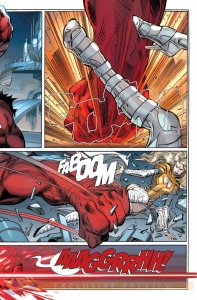 Rulk attempts to attack Emma.  This alerts the rest of the mutants, including Magik.

Cyclops attacks Rulk with a fifth of the Phoenix Force.  Magneto follows up on the attack. 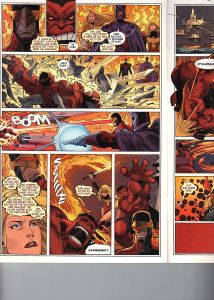 Rulk does a good job of stating that Captain America isn’t knowledgeable in his decision to come to the island.  Not like that would matter to Cyclops.

Magneto wants to keep Red Hulk a prisoner but Emma knows they can’t hold him.  She also gives us his resume.  He has fought the Watcher (poor non-interfering Uatu!) and the Silver Surfer.

Magik gets a sword strike in! 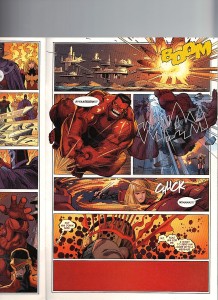 The X-Men wail on him some more.  Cyclops wants to send a message.

Wakanda.  Captain America and Iron Man are talking.  Black Panther is supervising.  There is a giant BOOM and the Avengers come running.

Issue ends with us seeing Rulk with a giant X on his chest.  I didn’t even know that Cyclops could leave burn marks as his optic blasts are not fire related.

There is an house ad that is promoting all of the titles that are set in New York City, which is weird as most of them do.  Spider-Man, Punisher, Daredevil, Hawkeye, Captain Marvel and Venom.

With this issue, we end Avengers Month!