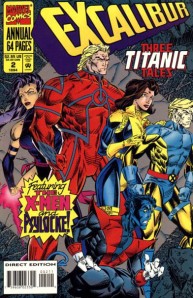 The Annual has three stories.  The First is Captain Britain and Psylocke trying to help their older brother, Jamie.  Kurt and Amanda are fighting Selene and the Hellfire Club.  The third story is the keeper.

A Change of Worlds

Kitty received a box and a letter from someone who has access to her Westchester days (the Xavier Institute).

Look how cute Lockheed is on the box.

The letter is from Kitty’s mother, who we haven’t seen in years.  If Carmen calls, Terri wants Kitty to tell him to call her. 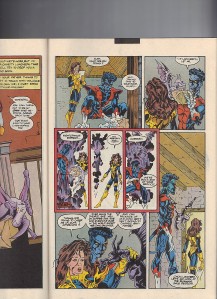 Kurt and Lockheed teleport the box to Kitty’s room.  Look at the face Lockheed is making on the return trip.  He doesn’t like the smoke and brimstone.

We get the impression, from Kitty, that she has tried to reach out to her mother and it is Kitty’s mother who has kept out of touch.

I do love Lockheed and Kitty talking, we haven’t had that in a long time. 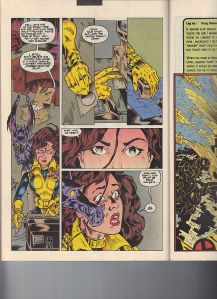 No one wanted to buy old floppy discs so Kitty turns on an old computer to see what is on the files.

Terri didn’t bother to pack the discs correctly, they were loose in the box.  Further signs that Terri barely knew her daughter.

“Cross your wings” is a cute expression. 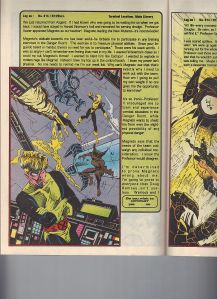 The discs have information on Doug, Warlock and Douglock.  Even Magik is shown in the footage.

Kitty runs pass Kurt, she needs to talk to Douglock.  She has Douglock scan the discs, as Doug wrote them.

Douglock knows he isn’t Doug, so the information is wrong.  Kitty really just wants Doug back to life.  Which is a shame as once he returned to life in the third volume of New Mutants and they didn’t talk or see each other until the series ended.  Worst, it was in an issue of Savage Wolverine.

Once again, Kitty’s hopes are dashed.  Kurt is there to comfort Kitty, even though she just wants to be left alone.

They hug and Kitty opens up to Kurt.  Doug wrote an entry stating that he wants to die a hero’s death, if he has to die.

Once Kitty made peace with Douglock not being Doug, they pretty much never speak again in the page of Excalibur.

This was a cute little story.  Glad Lockheed got some pages.  I liked the artist who did the middle pages, but the first and last pages had a nice cartooony style as well.

There are three pin-ups – Arab, Nightcrawler and a picture of Muir Island’s underworkings – for some reason.