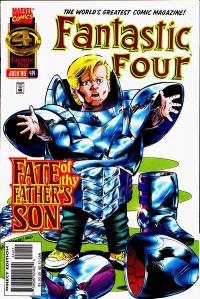 I own this for the Days of Future Past panel with Kate Pryde!

Issue opens with Sue and child Franklin hugging.  He’s spent the last four years as Psi-Lord, a twenty year old with full use of his powers.  Now he’s a child, and doesn’t remember missing years, he feels like he only missed a few minutes.

Nathaniel Richards, Reed’s father, was the guy that forced Franklin’s aging in the first place.  Thing is ready to punch Nathan in his dumb face.

Reed gets Grimm to calm down.  Nathaniel is an odd character, pretty much a douche but he’s Reed’s dad.  Though it seems odd when Reed calls him, dad, Reed seems more like a guy who says “father.”

Nathaniel explains what his motivations were. 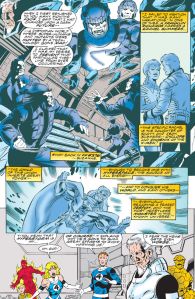 I had to check the issues to make sure that was Kate’s back of the head and not Storm but Kate was the only one to wear her hair up.

Nathaniel explains that there is a future, Days of Future Past, where mutants and heroes are killed and ruled by Sentinels.  There is an off shoot alternate future (which seems overly complicated) where Rachel Summers and Franklin Richards had a baby, who grows up to Hyperstorm, a villain who has been messing with the Fantastic Four, for some time.

Sue can’t believe her grandson is the main villain.  Reed has a plan on how to defeat Hyperstorm but he can’t reveal the plan out loud, as Hyperstorm is the master of time and space.  His plan does involve Galactus.

There is an ad for Disney’s Hunchback of Notre Dame.

Reed wants to go against Hyperstorm alone, as Nathaniel keeps stating that in every future, the Fantastic Four are dead.  The team is going regardless.  They are not bringing any of their friends though.  The team goes to make their final goodbyes.

Johnny’s ex-wife, Lyja the Skrull, is hanging out with the team.  Ben has feelings for her, which is so weird how those two are into each other’s gals.  As Johnny eventually started getting into Alicia, who actually was Lyja.  Johnny’s current girlfriend, Laura Green, is also Lyja, wanting to stay in Johnny’s life.  She knows how messed up that and Ben is sympathetic to her situation as he overhears her using Green’s voice when talking to Johnny.

Franklin is down for a name and Reed is working on the space ship that will get him to where Galactus was last seen.  Sue is coming, no matter what, and since this may be their last moment together, they are going to go bone.

Johnny kisses Laura and has a revelation and flies off.

Reed hugs Franklin and boards the ship with Susan.  Nathaniel, Johnny and Ben are already on-board.

Reed sets up some tracers, and finds a faint trace to the dimension that Galactus was banished too.  He is about to open a portal when Hyperstorm shows up.  The team tries to take him down, as Reed tries to open the portal.

Franklin senses his family is in danger and wants to d something about it.  Just then, a kid named Charlie shows up, he will help him out.  This is setting up the last issues of the series as this Charlie is Charles Xavier, in kid form.  This is setting up Onslaught.  Which is pretty cool.

Bullpen Bulletins is promoting Onslaught : X-Men, which finally reveals who the traitor is that Bishop hinted at in his first appearances.  It is Xavier, spoilers!  Peter Parker is in the hospital, they think it is due to being a clone, but it isn’t.  The Checklist for June 5th is :
Avengers Unplugged 6, with Black Knight and Blood Wraith
Captain America 454, with Sharon Carter, the final issue is coming up!
Daredevil 385, Pryo is in this issue
Spider-Man 2099 46, finale issue!  I had no idea that 2099 ended as the Heroes Reborn titles start
Sensational Spider-Man 7, Peter Parker going to the hospital
Cable 34, vs Hulk, under the control of Onslaught
Onslaught : X-Men, pretty cool!
Uncanny X-Men 335, the X-Men, Avengers and X-Man unite against Onslaught.  Shadowcat is in the issue, so we’ll review it one of these days.

Reed brings Galactus quasi-out of that dimension, he starts feeding off of Hyperstorm.  Hyperstorm is a conduit to hyperspace, which is infinite.  So those two are going to be linked together for maybe forever.  The team and Reed’s father leave, as they are no longer in danger of dying.  At least, that they think, but rot ruh, Onslaught is coming!

Letters are from – Vansant Ramlaggan of Nigeria Falls, Ontario, Canada; Michelle Rose Humphries of Labrador City, NF A2U 2 A1 (I had to look it up, it is Newfoundland); John Gross of Demopolis, Alabama and Chris Lewis of Alexandria, VA.