Look at that cover.  At first, I wasn’t sure what Meggan was doing or where she was going but then I see Nightcrawler looking down a pipe, so that is what Meggan must be doing – searching for Kitty.

Issue opens with a young boy, Colin McKay – who will one day become . . . Kylun – which sounds like Colin; which is on purpose.  Spoilers for Excalibur 43, I guess.

Colin and Widget are goofy around in Loch Daemon, in the Highlands of Scotland, a haunted place.  Vixen’s goons (who seem to buy second rate Hydra uniforms) are chasing Colin.  Either they killed his parents or his parents are dead under different circumstances.  The goons hear Colin and Widget swifts to his portal form and sends Colin away.  This doesn’t please Vixen at all and some of these goons are going to end up dead.

Hob’s End Station of the London Underground.  The Warwolves are escaping with their “skins.”  One of them is Kitty, dressed like rachel, and she is partially phased with the Warwolf.  Warwolf, looks weird, I’m so use to thinking of them in the plural.

As they run down a tunnel, a train comes out and almost strikes someone who fell onto the tracks but Captain Britain saves her.  Rachel slows down the train.  I like how everyone likes seeing Captain Britain, Brian is a rock star in his home country.  Some citizens start running away, as they know it is now on.  Nightcrawler enters the way they are leaving, and some of them are scared of seeing him.  I like how one lady thinks he is a cutie.

Rachel is losing her mind, she wants to find Kitty but a police officer stops her.  He dares put his arm on Rachel.  Kurt can tell that she is one second away from pulling her arm away from the cop’s grip and tells her that they have to keep the police as an ally.

A ways away.  The Warwolves get back to their home and ditch their skins, including Kitty.  One of them wants them to respect their skins, even though the other argue that they can get more.  Poor Kitty, she’s in some sort of near-death phase.  The Warwolves turn their attention to her, as they are pretty sure that she isn’t Phoenix.  The one that nabbed her, they don’t have individual names – from what I can tell – does the process of tearing her soul from her body.  Rachel feels this and burns through the ceiling of the subway and seeks out Kitty.

The Warwolf sees Rachel’s costume but can’t find Kitty’s skin.  The other two Warwolves laugh at him.

Fraser’s Bank, Thameside.  Nigel is being a sleaze and is kissing a fellow co-worker, at work.  For shame!  Though I can’t complain as that’s where I found my wife but we never stayed until after-hours for any on premises shenanigans.  Nigel sees Rachel’s Phoenix Force in the sky and is mesmerized.  Courtney Ross sees it and thinks about how her life has turn upside down now that Captain Britain is back in her life.  She also comments, to herself, that she is never done with work.  The market closes in England, next opens in New York, closes there then opens in the East and the day starts over again.

Rachel comes back to Excalibur, she has a faint trace of where Kitty can be.

Kurt notices a police officer who is grinning, menacingly and decides to track him.  Kurt follows the police sergeant down a tunnel.  A train passes and Kurt loses trace of the sergeant but he hasn’t lost Kurt.  The Warwolf is waiting in shadow for Nightcrawler to walk by.

Rachel warns Captain Britain and Meggan that Kurt is in trouble.  Meggan shifts to a more wolf form and starts tracking Kurt’s scent.

Over with the Warwolves.  The one that tore Kitty, is now suffering a stomach ache.  Next, starts taking a more human female form.  She puts on Rachel’s outfit, to cover up her now womanly body.  The other Warwolf comes back now holding the sergeant’s skin and Nightcrawler’s unconscious body.  This Warwolf offers Kurt’s body to the Kitty-Wolf (WarKat?).  ShadowWolf is about to take cover Kurt’s body when Kitty’s essence backhands the other three Warwolves.  I want to say there is suppose to be five of them, right?

WarKat is growing Kitty’s hair now, still silver like their skin but the more it resembles Kitty, the more she is in charge of the body.  Kurt comes around and tries to escape but is nabbed.  Just then, Captain Britain and Meggan bust through a wall and a fight starts.

The three Excalibur members knock out the three Warwolves.  They turn to the fourth one but Kitty states that she’s running the ship.

Rachel joins the team and Kitty has to tell them how cruel-some the Warwolves really are.  Rachel wants to kill the Warwolves but Kurt tells her that it isn’t justice but murder.  All of a sudden, human hands are pushing out of ShadowWolf’s mouth. 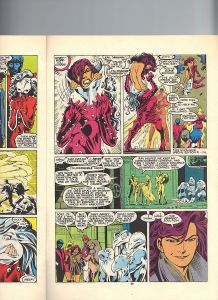 The first panel was used as a flashback from Nightcrawler Volume Two Issue 12, that I reviewed the other day.

Kitty pushes her way through the Warwolf’s mouth.  There are some websites that track X-Men in-canon nude appearances, that I stumbled on during my younger days, and this use to be Kitty’s only nude appearance.  I imagine she still doesn’t have any additional ones until Astonishing X-Men 21.

Kitty references how Technet’s Bodybag swallowed her in Excalibur Special Edition, so she hopes that that stops soon.

Kitty comes up with a fair punishment for the Warwolves.

The London Zoo gets a new attraction!  Which is pretty keen, in their cage, they have a television set and newspapers.

Kurt mentions how there was six Warwolves but two died, so I must be remembering that.

Great back cover by Alan Davis and Paul Neary!  Sadly, this is the only appearance Lockheed gets with the issue.