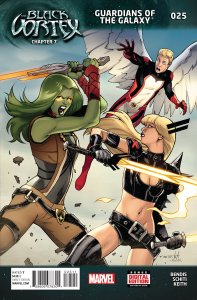 Cover is a tad disappointing as Gamora and Warren should be cosmicly enhanced. I know that they couldn’t have revealed that three months ago, when the covers are first shown but they could have changed that by the time the issue came out.  Instead of the Jean Grey Cosmic Variant, they should have just redone this cover – but with the new versions of Gamora and Warren.  That would have been both cool and appropriate.

Issue opens with Gamora checking on Beast, who is crying as he has finally realized that he is the worst.  He broke space and time, and there is no fixing it.

We are treated to another Beast diagram, this time with Excalibur making a reference (on the left side).

Hala, Homeworld of the Kree, The Crown Jewel of the Kree Empire.  Carol is speaking to the Supreme Intelligence.  She references how she is part-Kree but she was forced to be part-Kree (that is what the Brood did to her, right, when they accidentally turned her into Binary – or am I remembering that wrong?)

Supreme Intelligence still doesn’t want to do anything with the Black Vortex, it was missing for thousands of years, and he rather it stayed that way.  Supreme Intelligence goes further to threaten that since Earthlings attacked the Kree throneworld, there will be repercussions for Earth.

Drax provides the information that I needed last time and should have remembered.  The Enhanced heroes were deciding their next move when the Kree showed up, and snatched the Black Vortex.  Which caused the trio to go to Hala and attack the city.  That’s all I needed and now that I typed all of that, I bet it was on the recap page of Guardians Team-Up 3.

Supreme Intelligence wants to rehide the Black Vortex.  Jean establishes a mind-link with Carol, Quill, Storm and Drax.  Quill starts getting loud with the floating head and Storm gives the command.  Nova swipes the Black Vortex and rockets out of there.  I like how young Jean and Nova are, as she says “go go go” and he responds with a “I’m go go going!”  Which is a simple (and enjoyable) way to show their youthfulness.

Captain Marvel punches Supreme Intelligence to his dumb face. Nova gets outside and sees that the Kree Armada is still outside and now he is on the run again.  On the fly again?

Back inside, Supreme Intelligence tells the Kree to stop fighting the heroes, and to go after the child Nova.  I like Quill commenting on the fact that they don’t really have an exit strategy.    Add ‘strategy’ to words that I can’t spell, this is getting bad ya’ll.

Jean reshows that she still has that super move, of collecting psychic energy and an harnessing that into her purple form.  It helps that Supreme Intelligence is practically all psychic energy (as he has thousands of years of knowledge in his head).  From the coloring, it doesn’t appear as if she turns purple – but it has been quite some time since she has shown this trick.  Was it the last crossover, the Trial of Jean Grey, it may have been.

The Flying Fortress of Mister Knife.  J-Son and his ship are right above Nova.  J-Son gives the order and the ship starts raining down missiles to the planet.  Supreme Intelligence shouts that everyone needs to leave.  Quill gets everyone off planet, as well.

Hala is destroyed.  J-Son has reached Phoenix level of evil!  Jean can’t believe she finally gets to see a planet die.  The heroes are not sure if Nova is dead or if the Black Vortex was destroyed in the explosion.

J-Son is advised to leave the scene of the crime but he wants to watch the continued destruction.  I suppose I would too, as how often does one get to break a planet in half?  But one has to watch from a safe distance.  One has to wonder what stops J-Son from doing the same to Earth.  Besides all of Earth’s heroes putting a stop to it.

J-Son wants Misa to hand over the cosmic mirror but he doesn’t have it.  We see that Nova is unconscious and the mirror is floating next to him. 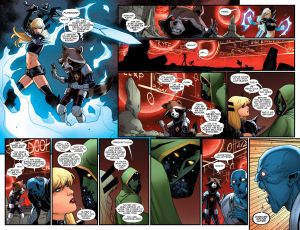 Cut to Magik and Rocket (I would like to see what these two have been talking about for the previous pages).  Rocket is having a bad reaction to all of Magik’s teleporting.

Gamora is happy to see her friend, which worries Rocket, as she is never happy.  I do like Gamora referring to her as, Lady Magik.  Magik tells her that they need the trio’s help.

Beast is still having his “Beast is horrible” revelation and Rocket just responds with “sucks to be you then.”  And it really does!

Magik offers that she can help the trio deal with the burden of the cosmos that are enhancing them, as she has been dealing with her own dark force inside of her and she’s been doing that since she has been seven!  That Bendis, he really does have a good grasp on Illyana.

Beast senses something and tells everyone to get down.

Everyone is blasted backwards.  Beast informs them that Hala is gone.  Magik is concern for her friends, possible, only really concern about Quill – as his death would upset Kitty.  At least a little bit, I give her less than six months to get over him and probably forget all about him until the next Peter comes around.

With this new development, Gamora promises the trio’s aid to the regular heroes.

Inside the Flying Fortress.  Scott, Bobby and Groot are held captive, so we are not waiting months before checking on them – and I’m glad for that.  Groot’s inability to say more than three words (and those same words in the exact order, every time) is starting to rattle Bobby.  J-Son comes to check on his captives.

J-Son is keeping them alive as he wants to trade their lives for the Black Vortex, and he knows that Nova still has it.

Issue ends with Nova floating in space, which naturally leads us to his own title and Part Eight!  We are still moving at a pretty decent clip!