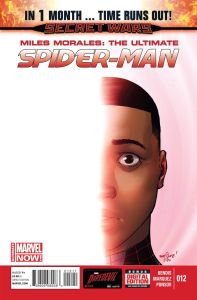 Good thing there is a Previously page.  Miles told Katie Bishop, his girlfriend, that he is Spider-Man.  She has Hydra agents for parents, so she told them – naturally.  Her father took the only natural step there is and . . . drugged and kidnapped Miles, Miles’ father and Miles’ best friend.  Oh Hydra, keeping it classy since 1965.  To compound troubles, Doctor Doom is working with Hydra.

Brooklyn Visions Academy.  Miles’teacher notices that Miles, Ganke (his best friend) and Katie are missing from class.  Judge, Miles’ roommate, leaves class to check on Ganke, and sees that his dorm room has been wrecked.

Hydra Secret Lair.  Miles wakes up, in full costume (minus the mask – so he is primed for being in a movie) and he and Jessica are in floating cubes.

Doom is mad from the All New X-Men, Miles and Ultimate X-Men coming to Latveria and destroying his castle (unless there was another Spider-Man / Doctor Doom confrontation), I doubt it and Bendis wrote both stories so that must be where the original confrontation.

Judge checks on Miles and his dorm, and their room has been trashed.  Just then, Cloak and Dagger come barging into the room.  Judge falling all over himself, in shock, feels pretty real.  A couple teleports into your room, I would be falling backwards, as well.  Dagger calls Bombshell (but she uses both hers and Bombshell’s real names, in front of a third party – Tandy and Lana, respectfully.  Tandy, that is an odd name, right?)  Bombshell is suppose to call “the others” which since I’m reviewing this issue, that can only mean one person in particular appears in this issue.  Get excited!

Dagger asks Judge if there is anything he needs to tell them, he admits that he knows who Miles ‘really’ is, which he should have said prior to Dagger’s use of real names.  Especially with those two names, I don’t know anyone named Lana or Tandy.  Lana Lang is the only other fictional character I know with that name.

Hydra turns on these laser lights onto Miles, which is a great way to obtain DNA samples, villains don’t have to come near the hero and no person has to do any work besides pressing a button, Jetsons style.  Van Damme has plans to compare Miles’ living cells with his soon to be dead cells.

Van Damme is very happy with Mr. Bishop’s results.  Bishop would hug Doom but he doesn’t appear to be the type, Doom tells him that he is correct – it is a very fun panel.

Miles is getting frustrated with all of these threats and starts struggling.  He unleashes a massive power surge, somehow.  Miles and Jessica are out of their floating cubes.

We see that former SHIELD Director, Maria Hill, is now (I hope, a high level) detective.  Shadowcat, still in that yellow and red costume – and the Ultimates arrive.  Shadowcat asks Hill to help them locate Miles (can’t they use code names, for those who may be overhearing the costumed folk in the room?).

Two Hydra goons are dragging Miles away.  Van Damme tells a third Hydra fellow, to start dissecting Jessica – as she serves no more purposes.  Hearing this, Miles starts taking names.  Van Damme is not impressed and blasts Miles.  Bishop points a gun to Jessica’s unconscious head and tells Mr. Morales to settle down.  If only it was to, simmer down.  That always works.  We see Jessica’s eye open.

None of Hill’s former connections have any leads.  I like how Shadowcat looks there, like she is bored but also, that she isn’t able to do anything productive.  Hill is told from another detective that unusual disturbances are coming from Staten Island.  People make the typical Staten Island jokes but the heroes decide to check it out.  Cloak teleports everyone away.

Shadowcat notices that it is too quiet, so they must be in the right place.  A window explodes and everyone starts heading inside. 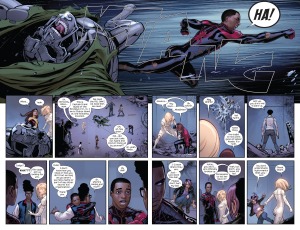 Miles has had enough of his love ones being threaten and has taken out every single Hydra member and has recently knocked out Van Damme.  Everyone is impressed with Miles now, including Shadowcat.  Dagger checks on Jessica.  Miles thanks Judge for pointing the way to him, though I don’t think that is what he did.  Miles wants to seeing see his father and Ganke.  Katie (I’m not sure if she is an expert with a bow and arrow) offers to help Miles find them, she knows where they should be.  Miles accepts her offer but makes sure she knows that they have broken up.  Dagger finally gets to hurt Katie, something she has wanted to do in a while.

There is an ad for Secret Wars 2015 – Infinity Gauntlet & Old Man Logan, I’m pretty sure I am skipping both of those.  Even though Kitty did appear in both of them for one issue each.

Miles finally gets to hug his father.  Later, Ganke confirms that he did not tell Judge Mile’s secret – it must be an issue with him.  Shadowcat is curious how Miles did that, he got yet another power upgrade.  Bombshell then sees a sight that puts her at unease.

I would shit myself if I saw another planet start to slowly approach my planet.  It looking like Earth, would be a second thought I have.

Since this is the last issue of the series, we get a nice Thank You section from some creators – Mark Paniccia, Senior Editor / David Marquez, Artist / Cory Petit, Letterer.