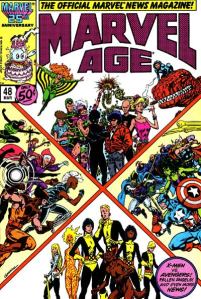 Alpha Flight 45 by Bill Mantlo, June Brigman and Whilce Portacio
GI Joe and the Transformers 4
Fallen Angels 1 by Jo Duffy, Kerry Gammill and Tom Palmer
Power Pack 29
Fantastic Four vs the X-Men 3 by Chris Claremont, Jon Bogdanove and Terry Austin.  I did not realize that the FF and Avengers versus minis came out at the same time, as the the X-Men are radically different, at this time. 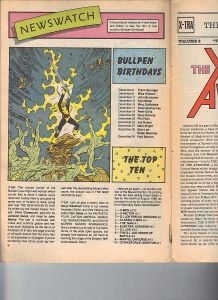 The Mutant Report features the X-Men versus Avengers miniseries.

There is a Fallen Angels feature.

Fred Hembeck does a classic What If Fantastic Four fought X-Men story.

There is an Alien Legion feature, whatever that is.

A second part of a New Universe look through

Issue ends with a slew of letters!  From Richie Donato of Staten Island, NY / P. David Hunter of Sandy, UT / Scott Morse of Santa Clara, CA / Josie James of Waukega, IL // Rick Houston of Richman, VA.  Even Brent Anderson wrote a letter, explaining what happened with the issue of 45 of Marvel Age, and its description of his series “Strikeforce : Morituri” a series that gets mentioned a lot in this issue but I’ve never heard of it.  It even gets the back cover!

Happy Veterans’ Day, all of you who has ever served!  I really appreciate it!