Jessica got the cover treatment!  Looking at the credits, I’m not sure which other pages Immonen and his team did, besides the very last page.  I suspect he may did any pages with Jessica (as she isn’t part of the action) but those pages still look like Hitch.  Maybe it is the inkers throwing me off but I’m not sure.  The final two page splash are the only pages that look like Immonen.

This issue starts with a warning, to read Siege 4, prior to this issue.  This issue ends the, Dark Reign of Norman Osborn.  Well, Siege 4 did that, but this has the aftermath.

Issue opens with everyone’s favorite villainous father daughter pair, Count Nefaria (of Uncanny X-Cast fame) and his lovely daughter, Whitney, Madame Masque.  She is seeking help from her father as her boyfriend, The Hood, and her are on the run.  This is one of the few appearances of the Count’s that I’ve actually read and it is hard not to read his voice in the classic vampire fashion.

I do like how, under the Iron Patriot helmet, Norman would still paint his face green to represent his Goblin side.  So kooky!  Siege took place on the Asgard portion of Oklahoma.

Poor Jessica Jones is watching the news, looking for any sign of her husband, Luke Cage.  Danielle is happy, sucking down some milk or formula.

Jessica gets a call from the US Army, Luke borrowed a phone.  Which is nice as my wife would not answer her phone from a number she didn’t recognize.  Luke is telling her that he is okay but there is a mess.

Cut to an awesome and what Hitch does best, double page splash.  The pages are full of debris and so much detailed destruction. 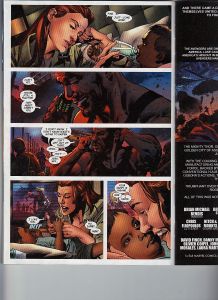 Jessica wants him to come home but he can’t as the New Avengers are still fugitives of the law – due to the Superhero Registration Act.  Their phones get disconnected.

The team make sure that they are all okay.  Ronin wants to take a moment to appreciate their win.  After that moment, the team wants to leave as, if they help the police, they will get arrested.  Most likely, after the damage has been cleaned up.  Captain America, the real one, is summoned by the President.  Most likely, Obama, but Bendis doesn’t like dating his comics, like that.

Spider-Woman looks over and sees the fallen villains that Norman had en massed, including the Wrecking Crew.  Ronin wants to know where the Hood is, but none of the thugs know.  So this whole issue is about finding the Hood.  Someone gives up the name of Hood’s cousin, John King.  They find him, he calls Hood and arranges a meeting.

The team gets to where Hood, Madame Masque and Count Nefaria are.  Cage is told about who Nefaria is.  Carol explains his powerset.  He has the combined power of Living Laser, Atlas of the Thunderbolts and either Whirlwind or Whizzer (it is Whirlwind)’s speed.  So energy projection from Living Laser and strength from Atlas.  Also, he is essentially immortal.  Cage makes a phone call, they need some additional power.

Inside, Nefaria is willing to help Hood but only for all of his money.  With the power upgrade that Nefaria promises, the Hood can make up all of that money, rather quickly.  He is not impressed with the Hood,at all.

The Avengers crash through the window and the fight begins.  Carol is the first to confront Nefaria, she’s going by Ms. Marvel at this point.  She starts taking a beating from him, but only so she can absorb his energy – a powerset people forget that she has.  I didn’t even know she had it!  Is that a left over from her Binary days?

So she hits him with his own power which weakens him to merely “not so powerful” but still.  He takes down Carol and shouts that he is immortal.  Just then, Wolverine shows up to start ripping into Nefaria.  This is who Cage called.  Carol starts back into Nefaria, taking more of his energy.  He is immortal but a tad less so, so Wolverine’s attacks are mostly weakening him.

Wolverine was on the West Coast, as the X-Men are on Utopia.

Cage asks Hill what the Avengers are, and she tells him that they need to watch the news.

New York.  The Next Day.  Superhuman Registration Act Thrown Out.  Steve Rogers, aka Captain America, replaces Norman Osborn as America’s Top Cop.  So this issue sets up the Heroic Age, a more back to basics approach Marvel branded the titles with. 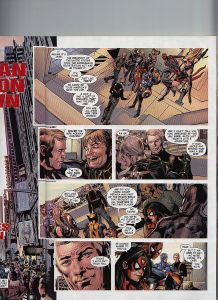 Rogers, out of his star spangled suit, informs the team that the President has appointed him, The Director of SHIELD.  Which lasts a decent amount of time.  Rogers reveals that Count Nefaria was one of the responsible parties from the original first issue of New Avengers, volume one.

Mockingbird brings up the question of what they do now.  This, somehow, sets up Cage to provide a giant monologue, which is mostly an excuse to reprint art from previous storylines.

We get a glimpse from the original Ronin storyline, that had Echo under the hood.

Yes, I own this just because of this page, that I already own once, during the original Sentry storyline.

Cage has been honored to be counted among these New Avengers.

Which is taken directly from New Avengers 8 with art by David Finch.

I guess the House of M counts as it was a Bendis penned crossover and this title would have had tie-in issues.

We get the storyline reminder, and the mess that it was, with the essence of the lost mutant powers, reappearing on Earth and killing Alpha Flight and eventually ending up with Weapon Omega.  It also was Bendis doing what Marvel needed so that they can use Magneto again after Morrison’s attempted to shelf the character with the Xorn business.

Double splash page (they all have been, thus far) of Secret Invasion, another Bendis written crossover.

Double splash from when Doctor Strange was looking for the new Sorcerer Supreme.

The final one of these is when Rogers, as Captain America, got to throw his mighty shield into Iron Patriot, Norman Osborn’s face.

I really like this final page, clearly done by Immonen – with all of the characters, out of costume.  My only problem, with it?  Shouldn’t Bucky’s arm be metallic?  It is definitely flesh colored.

The next issue is Bendis’ first Avengers 1, with a very complicated time adventure.