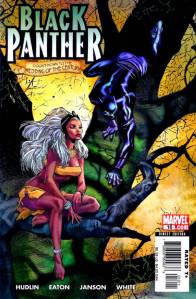 Bride of the Panther, Part Three of Five

We will be reviewing parts three, four and five – I only own those ones.  The first two parts deal with T’Challa wanting a wife and looking for a wife in the superhero community.  He proposed to Storm and she accepted, now they are going to make their big announcement to the world.

Wakanda.  In a barber shop, one guy is upset that Black Panther isn’t marrying a Wakandan woman.  In a beauty salon, a few women wonder if Storm can produce heirs for the kingdom.  Two Wakandan scientists would like to run some DNA tests on Storm, to learn more about mutations.  This page ends with more traditional Wakandans wondering if their king is moving too fast, as he hasn’t dated Storm, at all.

Avengers Tower.  Spider-Man calls out to his wife, Mary Jane – so in the Post-Brand New Day era, the Avengers let his serious girlfriend live in Avengers Tower?  That makes sense, right?

Black Panther and Storm have sent the Avengers a holographic message, inviting the team to their wedding.  The Avengers are – Luke Cage, Iron Man, Spider-Man, Captain America and Spider-Woman.  Captain America is super supportive of the couple, T’Challa is a close friend of Cap’s.  Luke Cage is excited about the prospect of a Bachelor Party.

Westchester, New York.  The X-Men gather around the announcement.  They are – Nightcrawler, Kitty Pryde, Wolverine, Cyclops and Emma Frost – if only this was an official line up, of any X-Title.  The X-Men have a very drastic opinion of the couple.  Kurt can’t believe Storm is going to stay in Africa.  Wolverine comments that none of the X-Boys had a shot with Storm.  Cyclops is sad that the team has lost one of their best leaders.

Kitty, being a great friend of Storm’s, is upset with her teammates.  Kitty is super supportive of Storm.  The boys quickly turn around on their opinions.

There is a Got Milk? ad with Brandon Routh as Superman.

The Baxter Building.  Thing wonders what the dress code is going to be.  Sue seems to be jealous that she isn’t getting to marry T’Challa, that Storm is one lucky lady.

The South of France.  Princess Zanda, who I can only imagine is Black Panther’s Catwoman – in that she fights him but she also loves him.  She is not thrilled that he isn’t marrying her and sets out to do something about it.

SHIELD Helicarrier.  SHIELD is preparing for the security detail that is going to be massive and a huge headache.

The Bronx, New York.  The Captain America from Truth : Red, White & Black – one of the many guys who was ‘tested’ on prior to Steve Rogers got the proper treatment.  Captain America villain, Protocide, essentially has the same origin.  This Captain America, Isaiah Bradley, is the grandfather of Young Avengers’ Patriot, and is one of the government’s best kept secrets.

Back in Wakanda.  Security is also concern with all of the costumed types and political figures, being in the country.  Though they consider Storm to be the biggest risk to the country.

Washington DC.  T’Challa’s last girlfriend, Monica Lynne – who broke up with him, is upset that he is getting married.

Dallas, Texas.  I really do like how detailed Hudlin gets with all of these pages, he really did his research.  Forge seems okay with the wedding announcement, as his time with Storm is history, at this point.

The United Nations.  T’Challa’s cousin is making peace with his rivalry but also has a dark secret that I’m not that interested in.

There is a double page ad for the Honda Civic.

Somewhere over the Atlantic.  Black Panther is trying to locate Storm’s family, on her father’s side.  In X-Men Annual 1 (2006), she located her mother’s African side.  Black Panther and his cracked research team, has located her grandparents and a grand-nephew.

New Jersey.  Hydra has also located them, and they defend themselves rather well.  Their last names are Munroe, so did Storm not do even a courtesy Ancestry.com search?  It makes sense that they don’t know that Storm is related to them, as I imagine the general public, doesn’t track the X-Men and they don’t know the X-Men’s real names.  The Munroes believe that Hydra comes a-knocking, due to their revolutionary days.

Issue ends, Somewhere in Africa.  Man-Ape, a Black Panther villain, has decided that he will be the villain that crashes the wedding.  He feels compelled to do so, as Red Skull is dead / Magneto is missing and the Green Goblin is in jail.

With this issue, we start the celebration leading to my wife and mine sixth anniversary of our wedding.  Oh how fast time goes by!