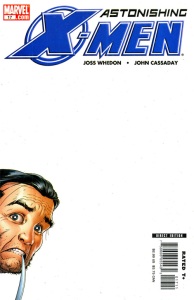 My son turns two, today, so we are celebrating with one of Pryde’s Pride!

Emma is taking out each member of the team, this is how she handles Kitty.

Colossus and Kitty welcome their new baby boy, Michael.  I’m not sure why these two would name their son, Michael.  Besides it being an English version of Mikhail, Colossus’ older brother.  But that is a horrible person to name your son after, and I’m pretty sure Kitty and Mikhail has never had any panel time together.  Which may explain why she would be cool with it, as she doesn’t have any negative implications with the namesake.

Xavier comes in and Kitty is very proud to to show off her son.  Xavier makes a face, like something is wrong.

Years later, maybe only one, Michael is saying “Arigato” which is Japanese for “thank you.”  Kitty isn’t sure where he is picking up this language, she figured Russian.  She wonders if he has a power like Doug.  Colossus quickly shoots that down, which I like that jealousy angle.

Xavier, in a new style hover chair – which doesn’t seem save, if someone pushed him off of it, as his legs are not protected at all.  Xavier tells Kitty to get away from Michael.

Kitty, rightfully so, takes offense that Xavier refers to Michael as an, it.  The whole team is here, to take away Michael.  Including Colossus, who hits Kitty, as Xavier shut down her powers.

Michael, apparently, has some great and terrible power, no one is being specific.  Kitty, as a great mother, refuses to allow them to take her child away from her, based off of vague details.  Kitty whispers to Colossus to distract them as she makes a run for it.  Proving that he is the worst, he hits her. 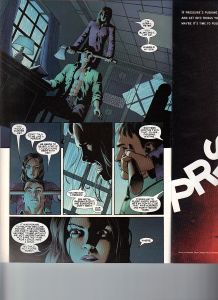 Kitty has Colossus dead to rights, with an axe currently phased through his head.  If he doesn’t tell her where her son is, he is dead.  She calls him a, big stupid metal robot – which is is how I feel about robots too.

Apparently, while being force-ably kept from her son, she sung him to sleep every night.  This went on for eighteen months, which is forever, in terms of having a baby!   Poor Kitty counted the days – five hundred and forty-seven times.  For anyone interested, 1.5 years is 13,118 hours.

This is sort of breaking my heart, poor baby Michael went to sleep, 547 times without his mother, at his side.

Colossus reveals that Michael is in the basement and “Emma’s” mind tricks are lifted.  Kitty, still in the illusion, heads off to the basement.

SWORD Peak station.  Brand is discussing the situation with Sydren.  Brand isn’t surprised that it was Emma, who was the traitor, Fury stated that would most likely happen.  Sydren states that it feels like Cassandra Nova but not quite like her – which is super helpful.

Agent Deems comes in, and says the mole has a visual.  Ord and Danger have teamed up.  Brand hates that the Shi’ar are still screwing things up, as Danger is Shi’ar tech, giving life.  I’m right there with Brand, Shi’ar have done more harm than good.

The mole checks in, wanting to stop Ord but Brand wants to see this play out.  Brand talks directly to the mole, who is . . .

I sort of like how there is a two page spread about NBC’s Heroes, which that first season was so good, especially once Sylar shows up.  What I like about the ad is how it builds suspense to the big reveal. 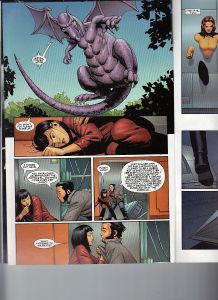 The big mystery since issue eight, who is the mole?, is finally revealed.  It is Lockheed!  What!?!

Look how boss Cassaday draws Lockheed, that little fella is built like a shithouse!

James wakes up Armor and catches her up.  The Pryde girl walked away.  Howlett saw Emma’s undercruve silhouette.  Armor wants to know about Ms. Pryde, me too!

Kitty starts narrating how family always fails you.  I love the phase, the only person you can trust is the one you make.

Kitty gets to the box that her son is in.

Blindfold wakes up Colossus.  He is knocked out from when Shaw boxed his stupid ears.  She gives him his orders.

Beast, still acting like a mindless animal, has killed a deer and is eating it raw dog.

We get a scene of the New Hellfire Club.  Cassandra Nova is getting inpatient. 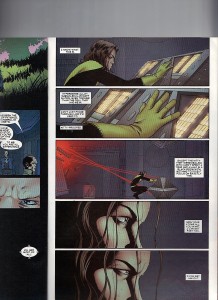 Kitty thinks to herself, that this is going to be difficult.  The box has been made, Kitty-proof.  She has 18 months of practicing for this one moment.

Kitty gets her hand into the box, and it is quite painful.

James isn’t use to all of this funny business, like women walking through walls.  He knows she went downwards and westerly.  Armor swears at him, in Japanese, that he calls “heathen funny talk.”  He reminds her that he has claws.

Danger crashes into the room and James and Armor fall backwards.  Ord is right behind her.

We get the page that this issue is mostly known for – 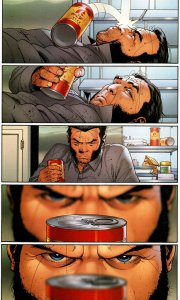 James Howlett disappears and Wolverine is back, thanks to beer!

Ord wants Danger to take him to Colossus. 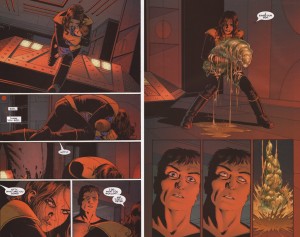 Instead of a human baby, that we knew wasn’t going to be an actual baby – instead it is a giant green slug.  And it is so disgusting that Colossus passes out.  This is a hold over from the Morrison run, wherein Cassandra Nova’s essence is trapped in the slug.  Which I thought she was stuck in the form of, Ernst, but I could be wrong.

Kitty passes out, from the strain.

Cassandra Nova can’t wait to transfer from the slug form to Kitty – which is a great idea! 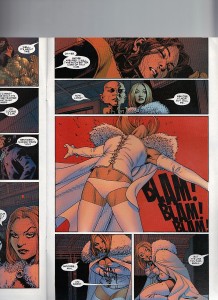 So much fun that Cassandra Nova has plans to treat Kitty’s hair better than Kitty already does.  She’s wasting it!

Before the Hellfire Club can make a move, Perfection (the fake Emma) is shot by . . . Cyclops!  Which ends the issue.

Cyclops makes a reference to issue 14, when Emma told him that he doesn’t have claws, after she dressed him as Wolverine and he attempted to stab her.  Instead, it was like a weak punch, I imagine.

Today is Walker Dennis’ second birthday!  I’m so proud of you, son, and everything that you have accomplished!