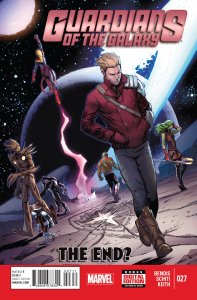 Spartax.  The issue opens with Quill shouting that the delegates need to get to safety.  Rocket can’t believe that crazy has followed Quill to his home planet.

Gamora recognizes the planet that now orbits Spartax, is it Kindun.  Which I don’t recognize as something.  Gamora states that the person who controls Kindun, hates her adopted father – Thanos, and is here to attack her.

Kitty (and me) needs someone to do a quick recap on Kindun.

Okay, this concept has only been around since Guardians Team-Up 2, and five came out recently (when I typed this originally).  Kindun is the name of the guy who hates Thanos, and he also named the planet after himself.

Kindun has enlisted the Chitauri, who I only know from the Avengers film.  I thought they were just the Ultimate version of the Skrulls, making the word – Skrull – a dirty slang word but that must no longer be the case.  Or maybe it is, but in the Ultimate Universe and in the Proper Marvel Universe, they are their own race.

Gamora flies off to confront Kindun.  Drax is fighting along side the Royal Spartax Guard.

Quill starts making a plan and Agent Venom arrives and joins the fight.  Drax and Venom will stay on Spartax proper and Quill, Pryde and Rocket will follow Gamora’s lead.

Kindun, the Living Planet.  Probably no relation to Ego.  Gamora is ripping through fools.  Kindun is connected to the planet, so he feels the damage Gamora is doing.

Spartax Royal Guardens.  Groot is fighting off the aliens.  We see Cosmic Kitty has a new form.  I’m still pretty sure she isn’t the mysterious lady that will be featured in A-Force – which is a real shame.  Pryde is getting used to Groot’s language.

I guess the away team didn’t leave as Quill had to tell Groot the plan.  Venom is really letting Quill know that the surface fight is nothing more than a distraction. 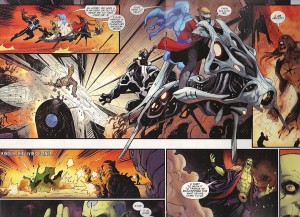 Pryde makes sure Quill has a real plan and he says he does.  I do like them calling each other “dear” and “honey.”  Pryde’s cosmic form, looks like how it did at the beginning of Black Vortex, when we were given everyone’s enhanced form.

Kindun, the Living Planet.  Gamora appears beaten so Kindun, the dude, tells everyone to stop the beating.  She bounces back to her feet, she makes a big speech about how he needs to release his anger towards her.  She will kill him, if he doesn’t leave her alone.  He sends his forces at her and she just starts slaying them.  She will kill Kindun and then her father but she rather just kill her father.

The away team gets closer to Kindun, except that it seems to be getting farther away from them as they approach. 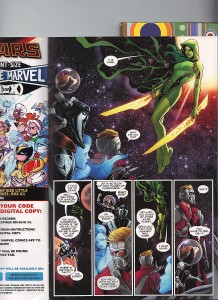 Gamora tells them that she has to leave. 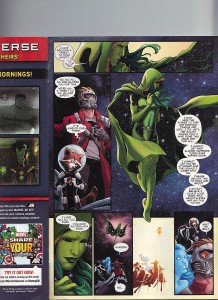 Gamora being with the Guardians, has brought more fights than it has brought success.  Gamora wants to take the fight to Thanos, as she can’t do that with all of these distractions.  She loves the team and can’t bear to repeat that she is leaving to Groot, so she wants them to do it.

The Planet Spartax.  The delegates are so thankful as Quill has saved the planet, and it is only his first day as acting President.

Quill wants a moment alone away from the delegates. 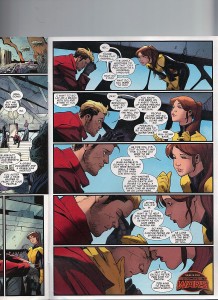 I really adore this last page and we learn that this is the last issue of Bendis’ Guardians of the Galaxy.

Prydc asks Quill want he wants to do.  He only really wants to go to a beach and look at Pryde, which is awesome.  She’s okay with whatever he decides to do, as long as it is the best decision he can make.  She is on board with him staying as the President, she’s okay with him being a space pirate, she is all in.

I imagine we will get his decision in Star Lord and AoA Kitty Pryde, which I’m way excited about!