I like how the first two pages are laid out.  The panels on the first page go – Wing dead in the Danger Room, two dudes looking down at something and Emma, the Cuckoos and Blindfold hearing something.

Second page – The telepaths are taken out, the two dudes are bathed in red light and the Danger Room’s door is electrified.  So it goes down one page and the opposite panels on the next page.

Scott looks over Emma.  Wolverine confirms that all of the psychics are taken out.  Kitty goes to check on the rest of the students.

I sort of like the nice touch that Scott and Logan don’t know the kids names but Armor is there to name check Wing.

Some ink kid, comicbookdb nor Marvel Database names him, tells Kitty that the non-ink kid passed out.

Over at the two dudes, we see that whatever they were looking at, is gigantic.  I do enjoy Laura Martin bathing their scenes in red.  The item breaks out of the roof and we see that it is a damaged Sentinel, that states “I hear you, Lord.” 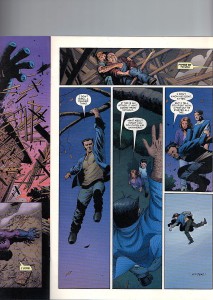 The team is outside.  Wolverine isn’t smelling anything.  Kitty wonders if Logan can track Wing, but he doesn’t know him.  Like a jerk, though, he promises to kill him, when he finds him – which seems like quite the overreaction.  Of course, Wing is dead at this moment, so that isn’t great.

Scott is with Emma, he doesn’t know how she is still knocked out.  Beast told him that there is nothing physically wrong with the telepaths.  While Emma is passed out, we get a very narration captions, of a second voice in her head.

The Sentinel is slowing making its way towards the mansion.

In space, Abigail Brand is doing some push ups.  We see that on her arms, she has tattoos – “Anna” and “Grace.”  An agent comes in and tells her that the mansion has gone silent, including their mole. 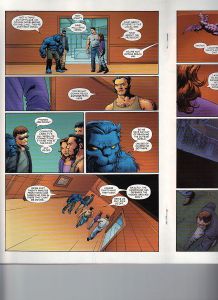 Look at those amazing backgrounds!

I like that the school only has nine telepaths, that really shouldn’t be a power that too many have.  Wolverine confirms that they are isolated in the county.

Lockheed arrives!  He must have been attempting to contact Brand.  Kitty requested him to do some long-range recon, and he is back.  Look at the muscles that Cassaday gives Lockheed!  That dragon is a star!

Wolverine asks how Kitty and Lockheed are able to communicate with each other, if all of the telepaths were shut down.  Kitty explains that their connection is intuitive, more instinct than thought.

So Lockheed lights up the sky, revealing the Sentinel.  Sentinel eye beams the team, Colossus proves useful by blocking Wolverine, Kitty phases through the beam and Scott jumps aside.

The Sentinel goes on stating, destroy the oppressors!  It flings a gate and both Lockheed and Scott dodge it.  That Sentinel has gone too far!  Scott makes a poor field decision and instructs Kitty to take the students into the Danger Room.

Scott optic blasts the Sentinel and gets back handed, which is impressive that he can take that hit and get back up. 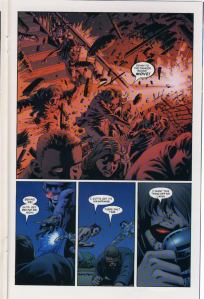 Kitty is getting the students into the Danger Room and avoiding eye beams.

Scott tells the boys to get behind him, as he wants the Sentinel off his lawn.  He takes off his visor and leaves a small crater. 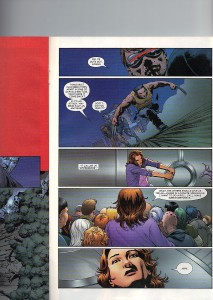 Colossus notes that he heard the Sentinel say, oppressors.

Kitty and Lockheed finally lock the students into the Danger Room. 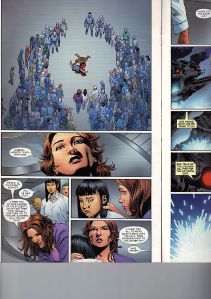 Cassaday straight up reuses the bottom panel of the previous page for the middle one of this page.

Kitty and the students (not sure where Lockheed is) see Wing’s dead body.  Kitty calls Armor by her real name, Hisako.  She asks Armor for help but Armor is too busy reeling from the sight of her dead friend.

Some kid notices that the exit door is missing.

Outside, the Sentinel is going on and on about father’s sins, as Wolverine slices into it. 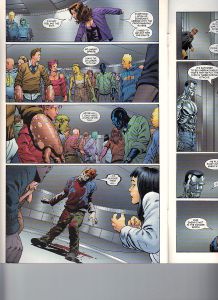 Kitty attempts to phase through the wall but she can’t leave the room.  Just then, Wing stands up – which is quite the sight!

Outside of the room, Colosus is putting his entire body to try to open the door.  He fails as he sucks at everything.  Scott feels pretty silly for doing exactly what was expected of him.

Emma has woken up and ends the issue stating that the enemy is not in the Danger Room.  THE THREAT IS THE DANGER ROOM!!! WHAT!?!  The Danger Room is angry!