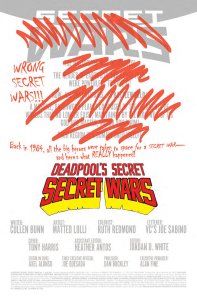 This miniseries has an awesome premise – What If Deadpool was involved in the Original Secret Wars?  And the story is pretty great.

The Surface of Battleworld.  Now… (Circa 1984…)  Deadpool is surrounded by the remmants of Cap’s shield and Thor’s arm and hand grasping for Mjolnir.  Deadpool is healing, so this scene takes place around the third issue or so. 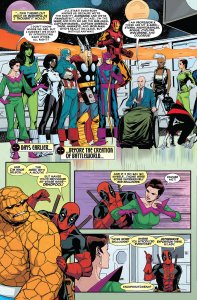 Days Earlier.  We get the recreation of the top panel of the page below from the first issue of Secret Wars.  I like that the introduction scene is giving the double page splash page – it seems like a moment that should be highlighted.

Plus we get some additional scenes and dialogue (as Deadpool is now there).  Points still go out to Colossus for making sure that Lockheed is introduced.  I’m sure the Avengers are pretty impressed with the X-Men having a purple space dragon counted amongst them.

Magneto has an awesome introduction, he should present himself more often.

Deadpool comments Wasp on her big balloons, her word balloons.  Secret Wars really should have been funnier than it was.  The stakes were not that high.  Deadpool is just like Spider-Man but with guns and charm.  Just to let everybody know how ‘off’ this issue is – Secret Wars 1 came out in May 1984 (cover dated) and New Mutants Volume One 98 is cover dated, February 1991.  Which is seven years before Deadpool’s first appearance.

Deadpool makes a reference to Iron Man but he doesn’t know that the man in the iron mask is Rhody and not Tony Stark.

Deadpool asks if the X-Men recognize him and no one does, including Wolverine.  Captain America states that everyone is noble and just and Deadpool points out that Magneto is on their ship.

We see the ships that the two groups of costumed individuals are on.  It was pointed out to me that the ships they are on (seen in the image above) is the same style ship that the Proper Marvel characters used as their Life Raft in Secret Wars 2015 1.

Xavier senses that there is overwhelming evil from the other ship.  Deadpool doesn’t miss a beat to point out how he is on the hero ship.

The Beyonder announces the goal of the miniseries (and the maxiseries) slay your enemies and what you desire is yours.  Deadpool whips out his swords and wants to murder the villains so quickly.  This scares the assembled heroes.  Deadpool whispers to Wolverine, I love all of Deadpool’s asides in the issue – and asks how Wolverine can tolerate all of this goody good shoes.  Wolverine states that the bulk of his healing factor is used to repair his pride.  It is this page that I realize that Deadpool has a “DP” in the same style of Daredevil’s DD – and he isn’t in this series.

The heroes, including Lockheed!, teleport to the surface of this, Battleworld.  Reed doesn’t see any villains but Wasp points out that Magneto is standing right over the hill.  Magneto is tired of all of this finger pointing, and knocks the heroes backwards.  He flies off after stating that only Thor deserves to stand counted amongst him.

Xavier asks who should be their leader, he is in a wheelchair.  Reed turns it down, as he is distracted as his wife is pregnant with their second child, and back at home.  Hulk isn’t interested.  Wasp defers to Captain America, who accepts the role.  Wolverine won’t follow a mere human but Deadpool tells him to get in line as you don’t want to be seen as Anti-American.

Now… Deadpool is resting and healing. 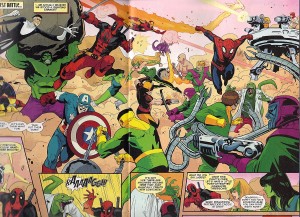 The first battle.  Look who Lockheed is bravely taking on!  The Absorbing Man!  That Lockheed, he goes for the tough foes.

Cyclops is tending to Colossus, as he is the worst.  Wolverine v Wrecker.  Cap v Thunderball.  Spider-Man v Doctor Octopus, careful!  I forget that Kang is involved in Secret Wars.  He doesn’t do much, from what I can remember.

Deadpool fights Lizard, who scratches his outfit.  This enrages Deadpool as there isn’t a machine that repairs clothes here – which there is and Deadpool knows in a fourth wall breaking fashion.  Deadpool flirts with Enchantress and She-Hulk.  Enchantress is disgusted and She-Hulk wants him to focus up.

Deadpool takes out Kang, single handedly – which is up there with Squirrel Girl’s abilities!

The heroes are getting the unconscious villains ready to be their prisoners.  Cap sends Storm to do some recon.

Now.  Deadpool is feeling better and starts heading outside.  As this section of the issue ends with us seeing Deadpool, fully healed, shirtless and with a beautiful head of blonde hair and a mustache to match!

Here is hoping that Lockheed keeps showing up in this!  He appears in three issues of the original Secret Wars and in two issues of the four of Spider-Man & Secret Wars.  So if his track record holds, he should appear in one more issue of this.  I imagine it will be the final and fourth issue.

Contest of Champions : Bonus Round

Contest of Champions’ first issue came out in June 1982, two years prior to Secret Wars; thus nine years before Deadpool was a thing.

Camagni really likes to draw Kitty from behind!

Can’t really blame the art team for not making sure costumes match from the original series.  It shouldn’t have been hard to get it right, as the trade is still in print – I believe.  Shamrock and Kitty both should have a full head mask, but that’s okay.

Deadpool is speaking on the behalf of the the B-Level characters (perhaps C-Level) as the Grandmaster and Death have chosen their champions.  So the two contestants make a bonus round.

In addition to their proper champions –

For the bonus round, their champions are –

She-Man-Thing is terffic in this issue, I wish she was a real character – or that she became a bigger character now.  I’m all for Death’s team.  I forget that I actually do enjoy Doop.

Deadpool wants to split up, immediately but Howard tells him that is foolish.  Pink Sphinx, also a new character (along with Vile Tapewom) reveals the hidden object is in Patricia’s Platinum Playroom.  Deadpool wishes she just whispered the information as now the other side knows where to look.  Deadpool knows where that location is, in St. Louis so he will seek it out and asks Doop and Howard to hold back the other side.  Essentially splitting from the group.

Deadpool grabs the object and the issue ends with the object just being a Participant globe, which upsets everybody.  Well, except for Death who makes out with Deadpool – in an awesome reference to Joe Kelly’s run on Deadpool, wherein Death is attracted to Deadpool.  Which, yes, Kelly does involved Thanos eventually, which may be my favorite Thanos appearance.