Years of Future Past 1 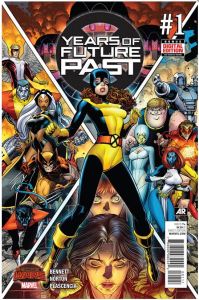 I had to add the Norton variant to my Wishlist.

Thus far, this is my favorite series under the Secret Wars 2015 umbrella. 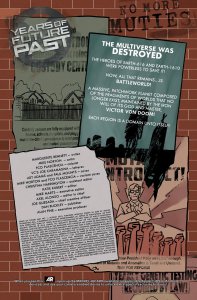 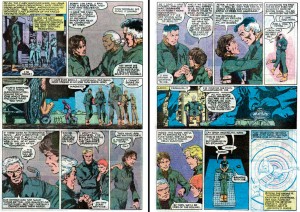 So any new characters that we are taken with, we know their eventful state.  So there is an element of heartbreak with this title.  This is one of the more bleak series, I would add Inferno to that list. 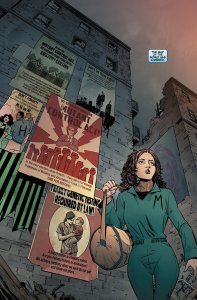 Thanks to Marguerite Bennett’s X-Position at Comic Book Resources –

We know this character isn’t Kitty Pryde, but her daughter – Christina Pryde!  So much of these first few pages are reminiscent of Uncanny X-Men 141. 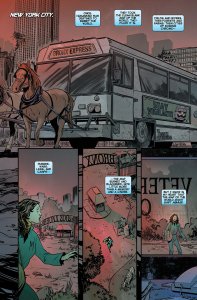 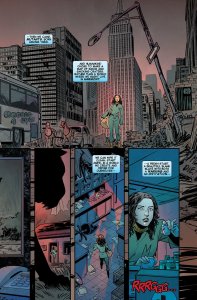 New York City.  Christina is thinking back to how the world use to be, I imagine she doesn’t have any first hand memory of it.  Everything was fine until mutants showed up, then humans decided to blow up the world. Which is never a good idea.  Christina, like her mother, is an optimist. 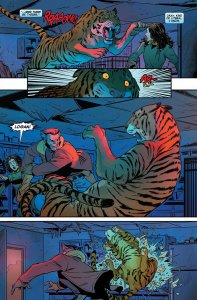 Somehow, she is attacked by a tiger!  Good thing Wolverine is there to save her.  Good job of Bennett to not have it be three tigers to match the number of rogues.

Wolverine isn’t sure why no one has eaten the tigers, with food being so scarce.  He makes a reference to barbecue sauce but she doesn’t know what that is.  She is looking for medicine and the tiger is there as all three are in the Bronx Zoo.

Wolverine calls her, Chrissie, but she wants to be called, Christina – so that’s what I’m going with.  Wolverine remembers changing her diapers so he gets to call her anything that he wants.  With her being (maybe) 18 – I bet she is 14 to match her mother’s first appearance – that makes sense.

Christina asks about Cameron, the son of Wolverine – but he got tangled up.  Logan has a nose for trouble but Cameron only has a taste for it. 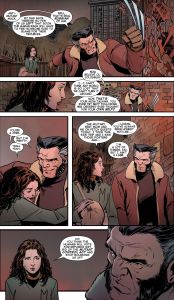 Christina shows Logan that she is the nice blend of her parents, through her words.  Logan teases her and she calls him, a jerk, classic Pryde!

Christina asks Logan for his honest opinion, if he truly believes the flatscans will reverse the Mutant Control Act.  He hints at how many mutants were killed in the first wave and now the rest are in internment camps.  Logan tells Christina that she was the last mutant born.  Mutants are sterilized now.

Christina leaves Logan’s side and tries to get back to her parents.  She sees a few rogues, militia and more tigers. 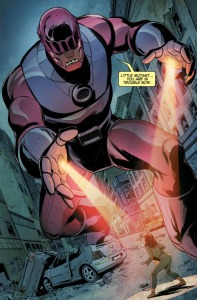 A sentinel finds her but its mode of community seems pretty casual.

There is a SuperHeroStuff.com ad for a hero box that offers $70 worth of product for only $49, which sounds awesome.  We tried, for Walker Dennis, a similar program called – Citrus Lane, which is a more affordable $30 but the items are not as awesome as superhero related merchandise.

The Sentinel is about to open palm blast when Kate Pryde jumps in front of Christina.  The Sentinel calls Kate Pryde, Mutant 187 and she was instrumental to capturing mutants 234 & 339, ten years ago.  I imagine the identities of these mutants will be important, later. 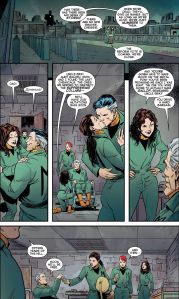 Christina wants to know if there is any news on Storm, but there are no new graves.  Sentinels give everyone numbers but once the mutant dies, they get to have their mutant names placed on their tombstone.

What the Prydes were looking for are chemicals to dissolve the suppression collars.

Colossus reveals that it has been 15 years since they have been in this camp.  Magneto promised Christina that he would make her a metal pony that gallops.

Meanwhile, aboard Air Force Once.  President Robert Kelly wants to scare his fellow flatsfcans into not revolting the act.  Kelly orders two folks, Martinez & Foster, to get some footage to remind idiots why they want to hate mutants.

South Bronx Mutant Internment Center.  Kate and Rachel are having a chat.  Kate references Xavier giving her a chemical set when she was fourteen.  Rachel says, Doom rest his soul, which I do like how the books all respect that Doom is the god of Battleworld.  They repeat that Christina was the last mutant birth before music was banned, the famine and the sterilizations.

Rachel goes around melting the collars.

The X-Men get out and Sentinels are quick to try to shut them down.  Did they keep their uniforms?

The X-Men make short work of a Sentinel.  In its final moment, it eye beams Christina. 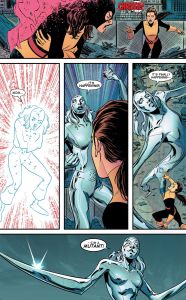 This event is enough to trigger Christina’s mutant gene.  She takes after he father though she reminds me more of Plantium of DC’s Metal Men.

Her parents thought that the collars would have made it impossible for Christina’s mutation to kick in but life always finds a way.

Later.  New Kent Military Base.  We see Iron Man on a pole, run through the middle.  The two government aides wake Mystique and Blob, the two mutants Kate Pryde turned in.  These two villains have been asleep for the past 15 years.

The X-Men are not leading to other mutants, to free them – they are heading towards a virus that can affect Sentinels.

We learn this region’s in-universe title is – United Doomstates Government. 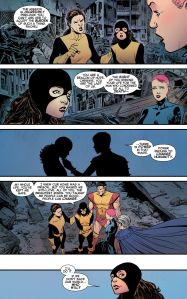 Christina is the best choice to make this new plan work.  Kate is not happy that her daughter is being burden with the task.  Just like in the original story, a young Pryde is being tasked with the bulk of the mission.  They want a photo op of Christina saving President Kelly.  Christina is up for the task.

Rachel senses that Storm is alive, she tells Christina to head towards the Baxter Building, where Kelly will be.  They have to find Wolverine. 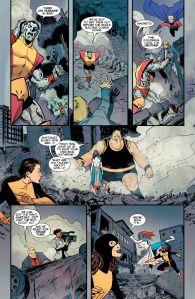 A building is about to collapse and the X-Men start saving the humans who are now in danger.  Mystique and Blob show up and accuse Kate of betraying her own kind.  She doesn’t know what they are talking about, so maybe those two are not the ones that she turned in.

The government aides are filming the mutant on mutant battle.

Just then, Logan and Cameron arrive. 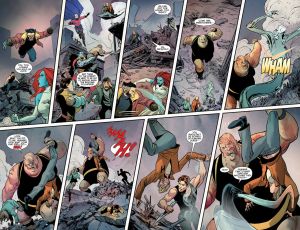 Wolverine starts fighting Mystique.  Blob knocks out Christina and Cameron phases through Blob and rips him apart, so who is his mother?  Once he comes out of Blob, he is covered in green, making me think he also resembled a Metal Man.

Christina can’t believe that Cameron just straight up killed Blob.  I have no guesses on who Cameron’s mother is.

Issue ends with the new Green (Doom inspired?) Sentinels on their way.

Such a great first issue!  Can’t wait for the rest of the series!