It is St. Patrick’s Day, and we continue to celebrate it here, at S&FwM with a spotlight issue of . . . Shamrock!

The cover states this is the “Final Conflict” but it isn’t the final issue, there is one more after this.  This is, though, my last issue that I have of the series.

I didn’t know that Steve Ditko did the art for this issue, that’s outstanding – as is the art!

Inside front cover ad is for Bill Mantlo’s Cloak and Dagger, that is now going bi-monthly!  Art by Rick Leonardi and Terry Austin. 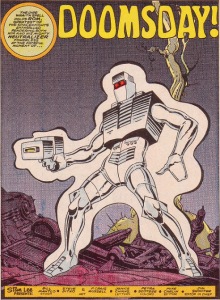 We get a brief recap bubble of what has happened.  The Dire Wraiths, ROM’s greatest foes, have cast a spell that has frozen him in place.

The event known as, WorldMerge, is occurring.  The Dire Wraiths can’t go home and they can’t take over the Earth – they are going to merge the two worlds.  The Dire Wraiths have even corrupted our Sun!  Poor ROM is forced to watch this process unfold.

The human race, not willing to depend on costumes, has spent billions of dollars (in a matter of days) to create a space station that is a giant weapon, as well.  The station is called, The NeoNeutralizer.  Forge, of the X-Men, helped build it and is on the station.  Henry Gyrich is also up in space with Forge.  Forge needs ROM’s Neutralizer, to power the weapon.  Gyrich wants all of the aliens off the planet, then he wants Forge to turn the weapon onto the superhumans – both mutants and regular folks with superpowers.

As ROM is stuck in his space, hordes of Dire Wraiths have come to taunt him.  Every Dire Wraith is present.  If only ROM could fire his gun, he could send them all to Limbo – but not Magik’s Limbo.

There is a half page ad for Rocket Raccoon’s first miniseries – by Bill Mantlo, Mike Mignola and Al Gordon.

ROM, the greatest of the spaceknights of Galador, has been fighting Dire Wraiths for two hundred years.

As soon as ROM wonders why Earth’s heroes haven’t come yet, they come!

All of the big names are there!  That’s Kitty Pryde on the left there, in that very generic purple shirt.  She’s below Captain (Monica) Marvel and Valkyrie’s knife and above Mockingbird there.  I’m struck with the thought about how many of these characters are in Facebook’s Avengers Alliance game.  Captain America, Beta Ray Bill, Scarlet Witch, Hercules, Tigra, Vision, Mockingbird, Shadowcat, Valkyrie, Beast, Hercules, Iceman, Colossus & Wonder Man (the worst!), Wolverine, Iron Man, Angel and Black Knight.  Others who are not in the game are – Moondragon, Namor, Starfox (which makes sense as potential rapist, doesn’t seem like a great character to play as) and that Etrigan looking fellow to the right.  Now that I’m looking closer, that’s Nightcrawler between Colossus and that off model Wolverine.

We’ll know that is Shadowcat by the next image.

There is a sweet two page spread but my computer is ruined by this two page ad (that must be a pull out) for Mark Jewelers.  Who was reading this issue, saw this ad, and threw down $540 on a ring?

I’ve already scanned the right side of the page, before I realized the setup.

We get team pages – 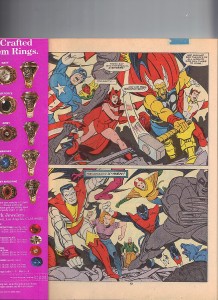 The Uncanny X-Men!  Colossus, Kitty Pryde (really not sure why she didn’t get a costume), Rogue, Nightcrawler, Professor Xavier (even!) and Wolverine, who is purposely in a Ditko designed costume. 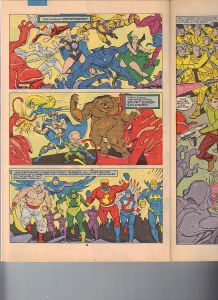 From Russia, the Sensational Soviet Super-Soliders.

And as this clearly came out after Mantlo’s Contest of Champions – Shamrock and Captain Britain (in that horrible costume!).  This is the only time Shamrock appears in the comic, but it counts.

A slew of humans arrive too including ROM’s supporting cast – Rick Jones, Brandy Clark and Cindy Adams.  Cindy’s mind is being shared by a Dire Wraith – that will be important later.  Brandy has a thought of how to break the Dire Wraiths’ spell.  She kisses ROM (driving Rick to jealousy) and that does break the spell!  The Dire Wraiths are evil, so a act of kindness, undoes their magic.  Sort of like a Care Bear Stare, I guess.

Cindy gets a headache, as the alien voice in her head, tells her that they need to stop fighting on Earth and go stop the actual threat in space.  ROM realizes she is right and takes off.

There is an ad for the Power Pack and Amazing Spider-Man Tips on Ways to Prevent Sexual Abuse.  Essentially, don’t let anyone touch your body.  If no one believes you, you keep telling someone until they do believe you.  Also, it isn’t your fault.

Forge and Gyrich are arguing about the mutants’ motivation in fighting for Earth.

ROM plugs his gun into the cannon.

Bullpen Bulletins.  Web of Spider-Man 1 is coming, making three monthly Spider-Man titles.  ROM 65 is also promoted.  It’s been building up for over five years, and now it’s coming to a mind-numbing conclusion!  That’s right, it’s the end of the Wraith War, with the Dire Wraiths making an all-out assault on mankind!  Standing between them and victory are ROM, the Avengers, the Defenders, and the X-Men!  (But where are the Fantastic Four?  Find out in FF # 277!) Story by Bill Mantlo!  Art by Steve Ditko and P. Craig Russell!

I wonder if this issue is suppose to take place after Kitty Pryde and Wolverine, when Kitty was inbetween hero identities, and possibly outfits?

Gyrich, if you give him two pages to talk, gets more and more racist with each new panel.  During Gyrich’s madness, the cannon ray is undoing all of the damage from the MergeWorld event.  The day is saved!

I imagine the next and final issue is used to wrap up any subplots that may have needed to be tied up.