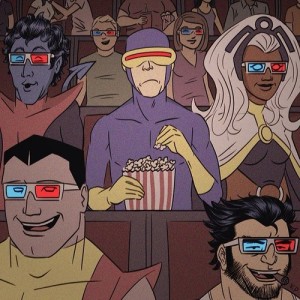 art by jhirarcfuker
(maybe?  He’s hosting the image on Rebloggy and I like to credit original art when I can)

So this scenario came to me the other day.

So let’s say there is a enemy who is taking hostages and Cyclops is the only guy around.  He starts optic blasting foes and takes care of business – as Scott Summers do.

Then afterwards – when he is walking back to the Blackbird – he starts walking pass the civilians he just saved.  Someone gets bold enough to shout at him, good job with the heat vision!

This, of course, makes Cyclops sad as his powers are not heat generated.  It is more of a force.  Also, it will remind him of Uncanny X-Men 391 – the awesome issue where Corsair and Scott go camping and poor Christopher Summers makes the huge mistake of asking his adult son, to start the camp fire with his eyes.  Scott had to explain to his father, how his powers works.  It is a great issue and that is essentially my review of it as it doesn’t have Kitty, Lockheed nor Illyana so this is the only time I can do the review.

I couldn’t find a perfect screencap of it but this website has it in a funny way :

I will always remember the issue number as it is the very next issue after Uncanny X-Men 390, the issue Colossus died in.  So two great issues, back to back.  Scott Lobdell was on all cylinders!

So, Cyclops is still walking away from that guy, maybe he is making a sad face or a grimace – or even a brave face.  He will get through this.

Next – some other guy recognizes him as Cyclops of the X-Men and shouts at him – Hey!  Do you know Wolverine, that guy is cool!  Then adds insult to injury by doing the claws stabbing the air thing that I’ve seen so many people do.  Trying to imitate Wolverine.

Cyclops doesn’t respond to this jerk either, but by now, he must be having Joe Harnell’s Lonely Man theme from the Incredible Hulk television series, playing in his mind.

Thanks to YouTuber Gustavo for hosting the video.

Such an amazing song!  I will often think about hitch hiking, also, when I think of this song.

So Cyclops is just putting on a brave face, hoping to stop hearing about heat visions and Wolverine being cool, having sad songs playing in his head.

Instead of all that, he should be having :

Cyclops, Just Blast a Dude from Uncanny X-Cast 50, playing in his head.  Sung / rap by Brian Perillo.  Based off of Young MC’s Bust a Move.

A song that I wake up to every morning.  Rob Briscoe’s Muties, We were Born to Run

is another favorite.  Of course, taken from Bruce Springsteen’s Born to Run.

I just checked this post in preview and it looked like those two links didn’t work so here is the Uncanny X-Cast dropbox link.

Now that I think of it, I guess this scenario only works in a universe where a guy with heat vision is super popular to create the assumption.  Do many people have heat vision in the Marvel Universe?  I suppose Vision does.  Gladiator does too but I can’t imagine many on Marvel Earth know who that is – even though he is the King of the Shi’ar.  Hyperion would to, but again, not many would know about the Squadron Squadron.  I can’t think of a fourth person and Gladiator and Hyperion are just Superman versions in the Marvel Universe – I’m sure there has been various other carbon copies floating about.

Marvel Knights Spider-Man Volume One 13 through 18, the Wild Blue Yonder, had Spider-Man meeting a new superhero who turn out to be a Skrull, that guy had heat vision if I remember correctly.  Virtue, was the character name.

There has to be others, I’m sure.

I just like the idea of Cyclops being tired of both – people getting the nature of his powers wrong AND people wanting to talk to him about Wolverine.