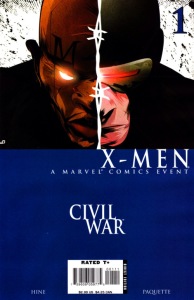 I use to tell people, back in my message board days, that all they had to do was read the first two pages on Comixology and be done with this miniseries.  Then while rereading it this time, I realized how much more times does Kitty and Lockheed appear in this issue.  Which I’m all for.

Civil War was the event that followed House of M and M-Day.  With the mutant population under two hundred, Cyclops invited all of them to the Xavier Institute.  I forget why the government decided that they must protect this endangered species, as I can’t imagine that it is due to their number being so limited.  Anyways, O*N*E (Office of National Emergency) are there with five Sentinels, that are operated by humans.  By the start of this miniseries, Emma has met with Tony Stark, the X-Men are going to stay neutral during the Civil War.

This issue opens with Kitty and Lockheed watching “This is the Hour” which is a very clunky title for a show.  Valerie Cooper is being interviewed about how mutants don’t have the same civil rights now that they are extinct.

When I write my silly fan fiction (mostly in my head) I almost always start with the Kitty on a couch, reading a book while Lockheed is either on her lap or on the back of the couch.  I hadn’t realized I got that idea from this issue.

I really do enjoy Kitty and Beast together, they have such interesting chemistry.  Probably due to them sharing the same role on a team, in the past, so they haven’t had much time to spend with each other – before Whedon / Cassaday / Martin brought them together.

Look how happy Lockheed is there on her lap!

Those two joking around is so fun, Beast got fleas one time and she won’t let it go. 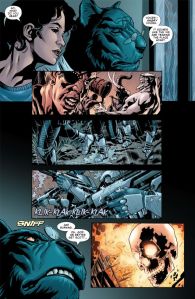 The 198 are having a bit of an uprising.

Callistro and Caliban are trying to draw the Sentinels out.  Looks like Mammomax is still alive too.

Domino and Shatterstar are fighting off the soldiers.

Val Cooper, on the news, is trying to sell the idea of protecting mutants and not imprisoning them at their own home.  Well, the X-Men’s home.  Domino is reminding Shatterstar that they agreed to disarming and disabling, as he seems overly kill happy.  The soldiers are using rubber bullets, which I feel like in 2006, rubber bullets was all of the rage.  Domino is doing all of this so that those mutants who don’t want to be there anymore can leave.  Which is weird, as those mutants volunteered to be there, in the first place.

Bishop and Colonel Reyes arrive, Reyes believes Domino and Shatterstar are terrorists for blowing a whole in the barrier wall.  I guess since the X-Men have allowed government manned Sentinels to flank their mansion, so their home is now government property.

A Sentinel references that the 198 are on a list, so they have to use low energy blasts on them since Domino and Shatterstar are not on the list, they can fire at full blast.

Reyes wants the X-Men to help, Bishop called them.

The Adventure Starts Here! (New Number 1’s)
Annihilation 1 of 6
Heroes for Hire 1 – which I read as Black Cat was on the team but I couldn’t keep reading it
Agents of Atlas 1 of 6
Claws 1 of 3, which i read all three issues as Joe Linsner drawing and writing Black Cat and Arcade, I’m all in!
New Beginnings!  (New Arcs – Not including Number 1’s)
Sensational Spider-Man 29
Runaways 19
X-Factor 10, I own issue nine and eleven
Black Panther 19, I own issues 16 – 18 and then, 22 and finally 31

Domino apparently can now control the weather with her probability powers.  I’m sure she’s never displayed this power set since.

There is a full page ad having Hulk promote the Dodge Caliber.

Caliban is growing stronger with all of the emotions that are around him.  When did that become part of his power set?  That must be from the Apocalypse upgrade, right?

There is a full page ad for Monster House, which I’m  pretty sure we watched because it was Oscar nominated.

Caliban spits sorrow or regret at Bishop, who immediately falls to his knees with remorse for failing his sister, Shard.  Shatterstar wastes no time to tell Caliban that move was without honor.  Domino’s plane finally arrives.

Talladega Nights gets a full page, which I still recall the ending’s race with fondness.  Is ten years long enough to spoil that, I was going to type “foot race” but thought better of it.

The X-Men finally arrive!  Kitty took the time to put on her uniform, Lockheed is with her.  Along with her is Beast, Cyclops, Iceman and Angel – who couldn’t find a shirt, apparently.  As I type this, I’m just now realizing that the Original Four X-Men are already in this title.  I’m all for Kitty replacing Jean in the Original Five.  Or just in general.

Kitty doesn’t like being part of this fight, mutants should be able to live their lives like the human beings that they are.

Cyclops wants Domino to stand down but she isn’t going to let people who don’t want to be there be force to stay there.

Emma arrives and starts calming everyone down.  Bishop things it was her who messed with his head but he’s told it was Caliban.  Emma fixes Bishop’s head, as the 198 are escaping on their plane.

There is an ad for the Incredible Hulk Season One, which I’m pretty sure you can buy now at ten dollars at Hastings.  Which I’ve been meaning to do, as I own the Best of Incredible Hulk set, but I would like to own the entire series eventually.

Bishop is upset as Cyclops let the 198 leave.  Bishop tries to insult Scott by claiming that Emma is his boss.  As if that truth would hurt Scott’s feelings.  Scott counters with his own truth about Bishop, that he’s taking orders from O*N*E, which also doesn’t insult him as he likes O*N*E.  I do like Cyclops’ reminder that Bishop’s future was overrun by Sentinels and this very well could be the start of that.

Bishop is trying to avoid that future by having mutants police themselves, but not really addressing the whole Sentinel guard issue.  Bishop claims Scott doesn’t know what real oppression is, and when Scott starts to counter that he does know real oppression.  Bishop, in a very intimate move, covers Scott’s mouth and walks away.  It is weird.

There is an ad for Ultimate Avengers 2, which isn’t even an attempt to adapt an Ultimates storyline.  I recently started Dark Knight Returns Part One and I was commenting on how great DC is at adapting their comic stories to animation and having those be good and how Marvel doesn’t really do that and most of their direct-to-dvds are not that well received.

Avengers Tower.  Tony Stark, in his Iron Man armor sans helmet is hosting a meeting with Val Cooper and Bishop.  He informs them that not all of the 198 fled, only half of them.  Stark is worried about them joining up with Captain America.  General Lazer is also in attendance.  Tony says that the White House wants him personally to oversee making sure mutants are not seen as a menace.  Tony wants Sentinels and mutants to work together.  Bishop has recruited microMAX and Sabra, who I don’t quite recognize the lady.  I know the name but that’s about it.  Tony is going to have Bishop lead this mission.

David Hine gets to show off his familiarity with Bishop’s character history.  He has experience with XSE and being a sheriff of Mutant Town.  Which is no longer a thing now.  General Lazer isn’t cool with being overshadowed.  Lazer leaves, making some racist comments.

The Xavier Mansion.  The issue ends with setting up the rest of the miniseries.  The male members of the Original Five are going to go rogue and aid the escaped 198.  Which I really enjoyed that aspect of this series, as those four barely spend any time together, on panel.  I imagine they get together off panel, all of the time.

There is a page ad for V for Vendetta, now on DVD.  A film that I watched before reading the trade.  That scene where Natalie Portman’s character is being held prisoner, I suspected who might be holding her hostage.  I told my wife, if it is who I think it is, we’re heading straight to Hastings and buying the DVD (we must have been watching it on some cable channel, and we had missed the first couple minutes) and I’ll be buying the trade.  The trade was a tad hard to read but I did enjoy the film.

The Original Four are wearing new black stealth outfits, so Emma (clad all in white) really stands out in the room.  Emma isn’t allowed to come along, even though she would also make a great addition to this four.  Kitty, Emma or even Firestar would make great additions, possibly even Dazzler!

Issue ends with the boys taking off and a Sentinel confronts Emma.