Worked Over by Bob Harris

Rereading these, Shadowcat is barely in these comics.  This issue, is mostly from Illyana’s perspective.

In the Portland Pit, Illyana and Ace (a new character, perhaps?) are trying to hide from Sugar Man.  A guy X-version of Modok – as I think of him, I guess.  Children can’t start fires or eat, as Sugar Man will find you and that isn’t something you want.

Sugar Man sniffs another child out, and takes off.  This makes Illyana cry, as that means they are safe but another child is going to die this day.

Above.  Two guys, flatscans I imagine, are bragging about how well they did.  One of them is disappointed that they only killed thirty, per square foot.  They are in an electric stage wagon, that Skin is operating.  The two flatscans ask Skin to drop them off at a girly bar.

Colossus is the narrator of this issue.  They are in front of the Seattle Core, not the Portland one.  Shadowcat doesn’t believe they stand a chance in breaking into the tower. 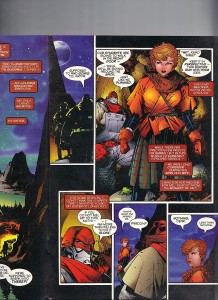 The plan is that the students are going the front door and the mentors are going through the back.  Shadowcat’s name is, Katya Pryde-Rasputin.  They are not technically married, as there are not that many priests or rabbis around anymore.

Shadowcat starts hinting at her big concern, that now that Colossus knows his sister is alive, he isn’t going to stop at anything.

Shadowcat doesn’t quite trust the word of Bishop, who she also questions his name.  We didn’t know that it was his last name, at the time.

Colossus runs off but realizes his wife hasn’t said a word in a few minutes and comes back.  By then, Shadowcat has already been taken.

I wouldn’t mind seeing how these two first met up, in this timeline, I imagine they were attracted to each other due to how opposite they are. 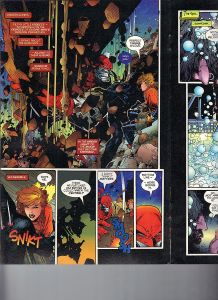 Shadowcat was taken by the Undercloaks, who are invincible in the dark but once they are seen in the light, they are easy pickings.  I do like how she was just sitting there, waiting for her hubby to come along.

Colossus is even more committed to getting his sister back.

The Spa.  Downtown.   Poor Husk is substituting for Quietus (a character that looks familiar) as his personal attendant.  Quietus is in charge of this Core.  She talks too much for his taste.  She gets this sweet dig in by calling him “impotent” and he corrects her that she meant “important” but we know she didn’t.

Husk starts couching, Quietus emits a vaporizer that makes mutants sick.  That’s how he protects himself, as his lady assistants are suppose to be flatscans.  Husk is still full of spunk and this makes Quietus happy, as he will enjoy breaking her.

Quietus throws Husk into the wall.  He tries to figure out who she works for.  She isn’t with the Human Leage, she is too young to be an X-Man.  He reveals that there is in-fighting with Apocalypse’s Horsemen.

Husk says that she is an X-Man and starts turning into bubbles.

Quietus explodes as Vincente was in a flask that he drank.  Which is pretty intense.  The two clean up, while recapping the mission.

Later, Skin takes the form of Quietus but he needs Vincente to help fill out the mass.  Husk is also doing her part to help.

This does seem like a complicated plan to get into the door.  Chamber joins up with the team, as a construction worker.

Below, Far Below.  Issue ends with Illyana being thrown up on, but with water.

The next issue has a fun caption – “if you cThey heyeyeyeheheheyeyan believe it, this was the upbeat positive chapter!”

The X-Facts is at the end of the issue.  The Wish List is –

Astonishing X-Men 2
X-Man 2
Generation Next 2 – The next generation of X-Men descend into the darkest depths of Apocalypse’s slave pens as the search for Illyana Rasputin continues!  Plus, the introduction of the “sweetest” villain of all . . . the Sugar Man!  By Scott Lobdell and Chris Bachalo!
Weapon X 2
X-Calibre 2
Amazing X-Men 2
Factor X 2
Gambit & the X-Ternals 2

Ads in the back are for the 90s FOX Spider-Man cartoon and Stargate, the game on Super Nintendo, Genesis, Game Gear and Game Boy.

Back cover ad is X-Men on Sega, Game Masters’ Legacy, a game I haven’t heard of before.