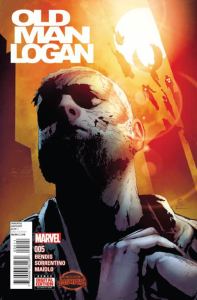 Another Secret Wars 2015 series, that I only read the last issue of.

I don’t have much experience with Old Man Logan.  I own issue 70, which was part five of the original series.  That is the big reveal issue, of what Wolverine did on his last day.  Let’s see how my second issue with the character goes. 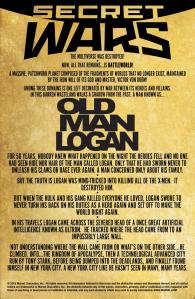 Previously within this series – Old Man Logan, picking up with where his last adventure ended, found an Ultron head and started an investigation.  It brought him to the border of his region, so he climbed the wall.  Which is highly illegal, unless it is part of your job – like Shadowcat in Star Lord and Kitty Pryde.  Old Man Logan went through several regions – Age of Apocalypse, the Armor Wars realm, the Deadlands (with the Marvel Zombies) and now he is in a sort of New York City.

Old Man Logan (is that what everyone keeps calling him?  I don’t know, I haven’t read many discussing the series or the character) is confused by the New York City, that now surrounds him.  His narration boxes, I’m not sure what to make of his speech style, is it just an old man speech pattern?

The Ultron head, I know, comes from Perfection – the Age of Ultron region.

Old Man Logan’s memories (that were already not great) seem to be fuzzy, as are his senses, so he doesn’t know what he can trust.  Scenes from earlier in the series, I assume, are played.  Susan Storm, Tony Stark, an Asgardian maybe? and Archangel – are seen.

There is huge crash, that draws his attention.  We start seeing heroes and we see that this is the Manhattan of the Ultimate End series – also written by Bendis.

Emma Frost and Teen Jean Grey, mentally reach out to Old Man Logan – which startles him, as they both should be dead.  Emma, showing concern and compassion that I didn’t know she could express to a Wolverine.  The two telepaths don’t care for what is inside Old Man Logan’s brain.  Jean can’t get over how messed up his memories are.  To these two, their Wolverine hasn’t been that dead, for that long.  For him, Emma has recently died.  Once Emma hugs Old Man Logan, he starts to relax.

Emma brings him home, wherein the X-Men can’t get over seeing an elderly Wolverine in front of them.  He starts eating, like he hasn’t had a warm meal in a while.  Iceman can’t believe his eyes.  Cannonball and Sunspot are right there with him.  Cylcops gets Rachel to confirm what they are seeing, as he wanted a second opinion.  Teen Angel can’t wrap his mind around how there is an old Wolverine, when current Wolverine is dead.  Which I guess makes sense, even though a young version of a character, is now in the present – shouldn’t be too confused how time travel works – or alternate versions of a character. 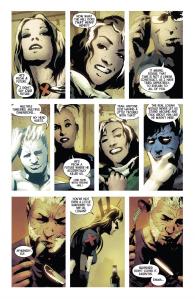 Emma tries to explain it in simple terms.  Rogue, talking to Teen Beast – which may be their first interaction, in three years.  Storm reveals what I’m sure Old Man Logan rather not have everyone know, that he killed all of these folks, once.

I do like Nightcrawler talking about how they are all talking (loudly) about this man, and he is just letting it happen.  Old Man Logan is just invested in eating, at the moment.  Magik tries to engage with Old Man Logan, as well.

Emma, Jean and Rachel all start discussing his mindset.  Is he under Mastermind’s influence, or Mysterio’s or is this a grand second chance to do things right?  Sunspot wants to take him to Nick Fury, the baron of this region.  Emma actually has someone he should meet. 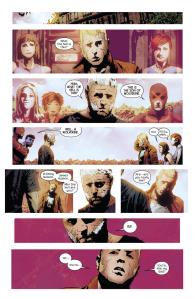 Ultimate Shadowcat!?!  Well, she is there (on our left) but no, he is at the Ultimate Xavier School, meeting Ultimate Wolverine’s son, James Hudson.

If only Ultimate Shadowcat had the option to talk about how she did meet an older Wolverine, at one point – he was the Ultimate Cable counterpart.

I know it is simple but I really like the decision of having the Proper Marvel Universe characters, speak in all caps and the Ultimate characters speaking in mixed case.  Is there a word for that?  Not all caps?

Poor James Hudson, never got the opportunity to really be a big name for the Ultimate Universe.  He did get his one miniseries but that’s about it.  Oh, and got to date Ultimate Shadowcat, so that’s something too.

Emma brought Old Man Logan here, so that he can see the Legacy of Wolverine.  It is also a smaller crowd, which I’m sure Old Man Logan appreciates. 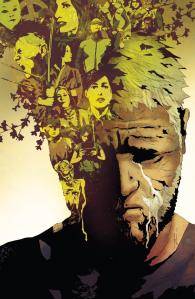 We get a visual of everyone Old Man Logan knows.  Marvel Database states that proper Kitty Pryde is in this issue and this the only page that I can imagine she is on.  I think that is her, below Cyclops there, in the middle.  That could be her, above him and to our left.  Old Man Logan is crying.

I do like Sorrentino getting the chance to draw so many mutants.  Bendis sure likes working with him and I like the way he does his layouts. 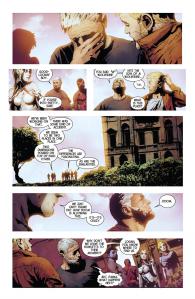 Someone tries to explain the setup to Ultimate End, how two New Yorks are merged and overlapped.

Emma offers to let the Howletts have a moment.  Instead, it seems like Old Man Logan wants to keep talking to Emma, but who wouldn’t?

Emma knows that Old Man Logan is proof of something, that God Doom screwed up, somewhere and Old Man Logan is defying odds.  She knows a big fight is coming, with Doom and nothing is guaranteed. 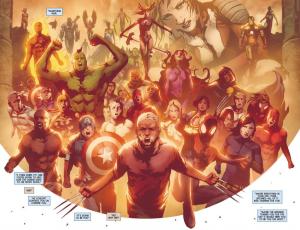 Kitty could be on this page, but I doubt it.  Magik made it, so that’s pretty great.

Could this page be hinting at the end of Ultimate End?  Which was pushed back from November to early December (for those not living in November 9, 2015 – who knows when this post gets published).  Or it could be from Secret Wars 2015 7, 8 or even 9.

Emma gets to go on, saying “bastard” a bit, how to beat a bastard might be with a bigger bastard.

After a two page splash page, of God Doom’s face, we get two pages of all white (except for narration boxes) which works as a time cut.  Old Man Logan wakes up, on the Post-Secret Wars 2015 All New All Different Marvel Universe.  He stops a mugging.  He’s in the middle of Times Square.

I’ll next see (and be reading about him) in Extraordinary X-Men.  Not a bad issue, more set up than pay off but that’s okay.

There is an ad (which is pretty smart) for Old Man Logan 1, by Jeff Lemire (who is writing Extraordinary X-Men, so I bet I buy more issues of OML than I was expecting too, which references to the team he is a member of).  Andrea Sorrentino, not drawing a Bendis comic!?! and Marcelo Maiiolo are the art team.  Could be interesting.  Can Sorrentino do six issues?  I guess he did five issues with this series, so he’s probably set for the first arc.  Maiolo is the color artist for this issue, so he will be handling colors over in the next series too.  I wonder if Cory Petit is the letterer of the next series?  Odd to name everyone but him – but that’s the life of a letterer.