We pick up with this series where we left off, back in November, from issue 18 to now 22.  Let’s find out what has happened in the meantime.

Inside front cover is an ad for the 2007 Chevy Aveo. 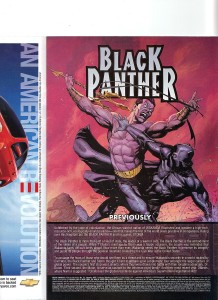 Since marrying Storm, Black Panther has had to go around, shoring up allies and making sure Wakanda is still a viable first world country.  They have visited Doctor Doom in Latveria.  They went to the Moon to visit the Inhumans.  Last issue, they went to Atlantis to pal around with Namor.  Three issues, three visits.

Issue opens with Jim Rhodes, of War Machine fame.  Currently, he is leading the O*N*E program, as a favor to Tony Stark and because General Lazer asked him too.

Rhodes isn’t happy about the Sentinels keeping watch over the X-Men, at their own home.  As Tony’s friend, Rhodes is Pro-Registration.  He likes how it doesn’t just focus on mutants or superhumans, if you want to be bigger than yourself and help the world in the big leagues, you have to get registered.

London, England – on the Thames.  Storm and Black Panther are visiting Captain Britain.  Black Panther is asking Brian about his stance on the Civil War.  T’Challa wants to openly come out against the Act.  Storm mentions how Brian has worked alongside mutants in the past, and should know how quickly the government can turn on a group of people.

Brian isn’t going to go along with them, on this quest.  Even though he isn’t giving the newlyweds what they want, he asks if he can get the Ebony Blade back.  Since an assassins tried to kill him with it, Black Panther isn’t quick to give it back.

Gears of War is coming to XBox 360.  I played it but wasn’t that thrilled by it.

Next, they go to Rwanda to give artificial limbs to maimed children.  We see Everett Ross, who must be working for Stark.  I really liked him from Christopher Priest’s run.  The newlyweds’ next stop is America so they can visit with Oprah and President Obama.

Casino Royale is coming to theaters.

T’Challa explains his plan to Ororo.  They are building public support and their lobbyist will state how the registration is more big government intrusion into the lives of Americans.  Thirdly, and this one is silly – he has brokers trying to buy a majority share of Stark Enterprises, which there is NO WAY Stark doesn’t have it so that he can never lose majority share.  T’Challa knows this and expects Tony has a point pill style defense.

He asks how her call with the X-Men went. 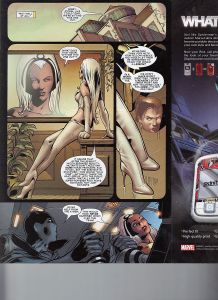 It didn’t go well.  Emma breaks the news to Storm, the X-Men have promised Stark that they are going to stay neutral during this war.  The war is a distraction from the whole Decimation fallout.  Emma makes the perfect argument that almost all of the X-Men don’t have secret identities, so registering isn’t a big deal.  Kitty overhears this and isn’t thrilled.

Meanwhile, at the White House.  A crowd of both supporters and naysayers have gathered.

There is a half page ad for the miniseries, Bullet Points, that I have to buy the fifth issue.  The other half is to promote Speed Racer Volume Five.

That is followed by a double page ad for the Nissan Sentra.

At the White House.  Before Black Panther and Storm can meet the president, his staff wants Storm to register.  T’Challa doesn’t have to sign as he isn’t an America but Obama can’t meet with superpowered folks until they are registered.

Panther addresses Stark, through a camera, which confuses the lower level staff members.  The new power couple decide to turn and leave.  Two Wakanda guards come down on flying chariots.  The no-fly zone over the White House, prevents a proper plane from picking them up.

The supporters at the gate can’t believe Black Panther was enraged so quickly.  A riot breaks out,  and Black Panther tries to quiet the noise.

Since Black Panther is making an “aggressive” move, this gives the military their excuse to open fire on him.  This annoys Storm and she throws down the lightning.

Now that Storm used her mutant abilities, that gives O*N*E their excuse to engage.

Now a fight has broken out.

There is a page with two ads, the top half is X-23 : Target X 1 by Craig Kyle, Christopher Yost and Mike Choi.  The other half is Star Trek The Animated Series, coming to DVD.  Not a bad show, from my memory, classic episodes given the animated treatment.  22 episodes on 4 DVDs.

There is also a double page ad for the Honda Element SC.

In a brief calm, we see that Rhodes has fallen out of his Sentinel.  These Sentinels do look like they were given some Wakandian flair.

There is a three quarter page ad for Immortal Iron Man 1 by Ed Brubaker, Matt Fraction and David Aja.  The ad on the far right of it is the Honda Element SC, so they must have spent some money for all of this space.

The supporters were about to attack Rhodes when Black Panther saved him.  Rhodes recognizes the irony of being saved by the man he is there to arrest from the people he was there to protect.

Tom Clancy’s Rainbow Six Vegas gets an ad, coming to Playstaton 3 and XBox 360.

Iron Man arrives, not thrilled that his friend is beaten in front of his enemy.  Panther tries to explain that he is helping but Iron Man doesn’t need any royal help.  The two of them get into some heated words.

Panther flies away on one of those chariots and Iron Man takes off after him.

Iron Man is about to punch Storm and Black Panther, in the outfit that would be his alternate uniform in Ultimate Alliance 2, jumps out of the plane with the Ebony Sword.  The sword makes short work of Iron Man.

Back on the ground, Iron Man is ready to end this but Rhodes speaks up about how everyone should just walk away.  Iron Man agrees, as Panther has a country to go back too.  Except he isn’t going back there, he and Storm will be staying in America.

Mail to the King!  Letters from – Jackie Williams of Louisville, NY / Veronica Rodriguez / Andre Clark of Brooklyn, NY / Jordan Hofter of Monmouth, OR.

Inside back cover ad is for Thomas Jane’s Punisher, now on DVD.  Such a good film!

Back cover ad is for the Dodge Caliber.