Now, this is the only other issue of Age of Apocalypse, besides the final issue – Omega.  This issue was pretty confusing but maybe I’ll be able to follow this one better.

The issue opens with the Madri torturing Bishop, as he may ruin all of Apocalypse’s schemes.  Shadow King was able to see Bishop’s memories of the proper timeline.  Bishop has been tortured for two days now.  Does Bishop ever comment on his memories of this timeline?  I imagine he could work it into many conversations.  But he also doesn’t talk about his childhood of the future either.

Storm drops from the sky, here to save Bishop.  With a gust wind, the Madri are thrown back.  This gives Storm the time she needs to use her lockpicks to unlock Bishop.  Bishop is surprised to see them and Storm asks if his Storm doesn’t have these skills and works in how she was an orphan in this timeline.

Storm hints that her fellow X-Men, Quicksilver and Banshee are outside.  They are trying to find the source of the Madri’s power.  Banshee lets out a hypersonic signal that knocks out the first guard.  Banshee states that all the cats and dogs in the ten mile area are losing their minds.  With the opening of a door, they see that the Madri really are . . . .Jamie Madrox!  Who is a bit insane, at first, I thought he was Jamie Braddock.  Their mission is to kill him but he looks insane, due to spreading himself so thin. 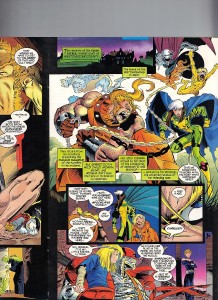 The Remains of the Xavier Estate.  We find the Astonishing X-Men (so I’m not sure besides the above three, who makes up the Amazing roster).  The Astonishing X-Men are Sabretooth, Blink and Morph (both of whom I know from Exiles), Wild Child and Rogue.

Iceman told them, so I guess he’s part of Amazing?, that Bishop and Magneto were captured.  Rogue is worried that both her husband and son are in danger.  Apocalypse had personally been there to oversee the mission.

Sabretooth sniffs all three Rasputins.  Sabretooth just says, a child, so Rogue thinks it may be her son – Charles.  Colossus pipes up that the child is his sister.  They were successful with their mission.  Colossus hints at the horrible price as Shadowcat stands at a distance, not pleased. 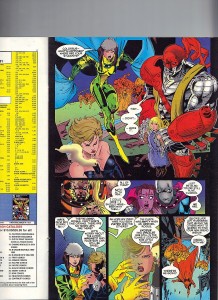 Rogue is sad to hear about the deaths of Generation Next.  No hint that Colossus allowed them to all to die, so that his sister may live.  Blink is shock, as she should have been on that team.  Which is the opposite of what happened to her in the Proper Marvel Universe, where the Pre-Generation X team (with Jubilee) was on a fateful first mission and Blink had died during.

Rogue goes to comfort Shadowcat , who I do like how she goes by Kate in this timeline.  She didn’t have the proper childhood that allowed a silly pet name, like Kitty.  Kate tells Rogue that she has no tears left to cry.  Kate also says that the estate was empty when they arrived.  Exodus and Dazzler (possible other Amazing cast members?) are in the tunnels looking for Charles.

Kate further tells the team that Quicksilver went to Quebec.  Rogue tells Sabretooth that he is with her.

Rogue, Sabretooth and Wild Child are now in the Tunnels, I can only imagine these are the Morlock Tunnels.  They come across Dazzler and Exodus.  With them are Gambit and Jubilee, I believe.  Gambit knows where Charles is.

Rogue is punching Gambit (which is a fun sight) as he had to let Charles go.

Elsewhere.  Quicksilver and Banshee don’t know what to do; meanwhile, Madrox is begging them to kill him.  Once he is dead, the Madri will fade away.  Quicksilver is conflicted but Banshee is all for killing him, as it is war time.  Before they can make a decision, Abyss arrives to taunt them.  Quicksilver has defeated Abyss before.  Abyss doesn’t allow that to phase him, as he jokes that Bishop and the woman that Quicksilver loves (Storm) are in dire straits.  I guess it is a secret that he has feelings for her as Quicksilver is surprised Abyss knows that.

Abyss calls Banshee a coward and this unleashes Banshee, I really dig his costume redesign, he should wear that outfit again.  Banshee tells Quicksilver to grab Madrox and save Bishop & Storm.  Banshee is willing to die, if he takes Abyss with him.  Banshee enters Abyss’ body and causes him to explode from within.  This reminds me of how you defeat Abyss in X-Men Legends II.

Thanks to YouTuber ShadowMokujin for hosting this video.

Quicksilver makes it out, but he is sad as a man he thought of as a brother, has just died like the hero that he is.  Madrox still wants to be killed.  If Madrox dies, Storm & Bishop will no longer be in danger.  Storm is loved and Bishop is needed so Madrox allows himself to die – though I’m not sure how.

Minutes Later.  Storm cries over the deaths, more sacrifices being made to stop Apocalypse.  Quicksilver hugs and comforts her.

Xavier Estate.  Gambit has confessed that Strong Man took Charles.  Guido took him, as he was the best chance of Charles escaping peacefully.  So “took” isn’t the right word.  From Rogue’s reaction, I take it he isn’t an ally so it must still be a bad decision.

I like how this issue is the pay off of both Generation Next and X-Calibre, as we learn that Generation Next was successful in their mission of saving Illyana and we learn that X-Calibre (Kurt’s team) was successful in saving Destiny.  I doubt Gambit’s series (X-Ternals) was about saving Charles but maybe it was but it doesn’t feel like a conclusion.

Sabretooth states that Gambit was the only one who failed their mission.

Issue ends with Quicksilver stating what they have to do.  Get the piece of the M’Kraan Crystal (that Gambit failed to do) and save his father and brother (took me a second to realize he’s talking about Charles).

This will all conclude in X-Men Omega, that we will get to but we have one more stop to make.