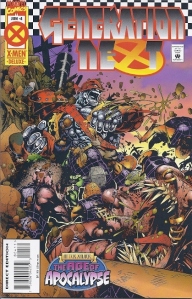 Lettering by Richard Starkings and ComiCraft

Illyana is narrating this issue, at first, from inside Mondo.  All she knows about life is the Core.  She tries to reach out, as we see Mondo trying to sneak out of the core before she dissolves inside of him.  Her hand breaks out from his chest and he tries to push it back in there.

Several Levels Above.  We catch up with Quietus as ‘he’ has shot Chamber, to make Sugar Man happy.  Bachalo was really firing on all cylinders with this series. This is an awesome double splash page and Sugar Man never looks much better.  Which is impressive as this is only his three appearance, after appearing for the first time in the second issue.

Sugar Man doesn’t care for being made to look foolish in front of the slaves.  Sugar Man knows that no one breaks into a place like The Core without backup.  So he stabs Quietus and Vincente oozes out of the husk.

Vincente is hurt, even in his gaseous state.  Skin is checking on him.  Husk is bleeding out.  Husk turns into her proper form and brags that they are the Next Generation of X-Men – so she couldn’t work the title of the series into dialogue.

There is a giant explosion from above them and Chamber is on his feet, bragging about how he tricked them all into thinking he was shot.  A mutant comes at Chamber but Skin extends something out of his forehead and runs the mutant through.  Sugar Man tries to escape, or get back up but Chamber blasts him apart.

Colossus lands and tells his young charges to find his sister and escape.  Sugar Man, who is tiny at this point, recognizes the name of Illyana.

Below.  Two thugs keep punching Mondo, even though he keeps asking them to stop.  He pushes the two of them off the cliff.  The little girl that Mondo saved, asks to be rescued as well.  Mondo tells her there isn’t enough room for two but he will try.  Just then, Skin and Chamber arrive and remind him of the mission.

There is a four page ad for the Ultraverse.  In 1961, Marvel launches the Modern Age of Super-Heroes.  1975, Marvel launches the Modern Age of Mutants.  Now, Marvel announces the Age of Ultras!  Marvel and Ultraverse and putting on a six month event starting with April 1995’s Rune / Silver Surfer 1, and leads into Black September 1995 – that will change both universes . . . FOREVER!!!  Other titles are – Lord Pumpkin 1 (May 1995) Hardcase 23 / UltraForce 8 (June 1995) Curse of Rune 2 / Mantra 22 (July 1995) UltraForce/Avengers Prelude 1 / Eliminator 3 / Lord Pumpkin 4 / Night Man 22 (August 1995) UltraForce/Avengers 1.  Guest stars include Silver Surfer, Loki, Thor, Black Knight, Infinity Gems and the Avengers.  From the Ultraverse – Prime, Rune, Mantra, UltraForce and Lord Pumpkin.  Safe to state, that I didn’t read this and never heard anything from it.  I did like the UltraForce cartoon, the two episodes I remember seeing.  I wished I had watched Night Man, as the concept sounds insane.  Plus, an appearance of Manimal, a show I thought was cheese as a kid but I bet I would love it now.  That and AutoMan.

Like Sugar Man did to Quietus, he stabs his tongue through Mondo.  Illyana falls through the newly created hole.  Sugar Man makes the mistake of threatening to eat Illyana.  Just then, Colossus double stomps onto Sugar Man.  She immediately recognizes her brother, she always knew he would come to her rescue.  Such a great splash page, of him holding her.  She’s so tiny in his left hand.  Him calling her “little snowflake” wins me over.

The human slaves are starting to attack their mutant overlords. 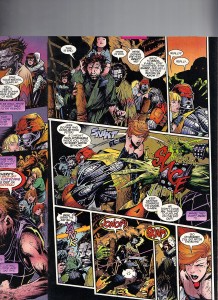 Colossus tells his students to get back to back, they will make it to topside.  Shadowcaat phases out of Colossus, where she’s been hiding this entire time.  We don’t really get a scene of the two sister-in-laws.

Chamber gets knocked down and Skin follows suit.  Shadowcat tells the others to flee as she gives chance after the boys. 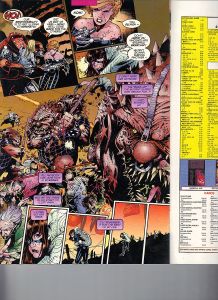 Before Shadowcat can actually do so, Colossus grabs her arm.  The mission is to safe Illyana, that comes before saving others.  Shadowcat loses respect for him but takes his lead.  Husk shouts to not leave them behind.

Sugar Man’s back up as arrived and humans are being slaughtered.

Once they are outside, Shadowcat unphases them.  Illyana is clearly safe and Shadowcat is going to go back for her students.  Colossus refushes to lose both is sister and wife so he will go safe the students.  Illyana finds her brother to be brave but Katya has her doubts.  Which is pretty intense.

Colossus is trying to make his way to the front door but it is closing quickly.

Colossus makes crazy eye contact with Husk, as she is clearly fighting.  Colossus falls to his knees, an utter failure as Illyana hauntingly narrates that he wouldn’t let the students die. 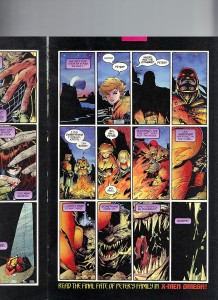 Hours later, Colossus has waited an appropriate amount of time and has come back – empty handed.  Shadowcat knows that he didn’t really fight.

Issue ends with Sugar Man, tiny again, hiding inside a fold of Colossus’ costume.  Next issue blurb is for X-Men Omega, except we are stopping by two other comics.

Astonishing X-Men 4
X-Man 4
Generation Next 4 – Trapped deep behind enemy lines . . . surrounded on all sides by Apocalypse’s goons . . . it’s do-or-die time for the next generation of mutants!  Will they finally liberate Illyana Rasputin so that she can help save the universe, or was this mission all for naught?  By Scott Lobdell & Chris Bachalo!
Weapon X 4
X-Calibre 4
Amazing X-Men 4 – Together again for what may very well be their final reunion, X-Men past and present unite to safe Bishop from the Madri and the maniacal Abyss!  By Fabian Nicieza & Andy Kubert!
Factor X 4
Gambit & the X-Ternals 4
X-Men Chronicles 2
X-Universe 2
X-Men Omega – This is the one you’ve all been waiting for!  The crystallization wave is about to inundate this last bastion of extistence, and it’s up to the X-Men to stop the tide before the entire universe is destroyed!  By Scott Lobdell, Mark Waid & Roger Cruz!

Such a great series!