So the last Pokemon Game(s) I’ve played was way back in 2004 on the old GameBoy Advance.

The ability to play as a girl was still relatively a new feature back then.  So, of course, I played as my wife.  I was having a good ol’ time when I captured (or collected – I should say) an Aerodactyl. 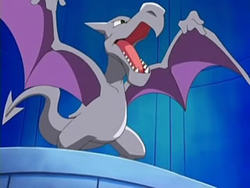 and the greatest idea of all time came at me like a freight train!

I should start a whole new game as Kitty and trade her an Aerodactyl as early as possible and have that be her main pokemon.  Unfortantely, you have to play for a bit and go through two gym leaders but I did go back and made a point of having him defeat those ones (how ever many that turn out to be).

It was such a great experience and it was something I kept secret until just now.

I will say this, officially, if they ever released one Pokemon game that had the ability to collect them all, I would pay $60.00 for that game.  I’m sure they would sell twice as many.  I know they would never do this as they currently get people buying two $40 games so why would they ever half their business on a chance at doubling it.

Which I don’t get as by now, it must be so complicated a process to capture all 718 types of Pokemon – though I do know that the number is probably a third of it with all the evolution types.

I was tempted to play X & Y recently as I heard they did make it easier to collect them all but then I forgot about the friendship evolutions and the day and time evolutions – I’m thinking Eevee right now – and I didn’t want to bother with all of that as I’m sure even if I just played the one game straight – at one point, I’ll want to try to get them all.

Anyways, I had a great time with my Kitty and her Aerodactyl named Lockheed and whenever I think of or hear the word, Pokemon, I think about to how fun those weeks were.  In fact, now that I think of it, I’m pretty sure that that’s how I played that one game, just trying to get to the Master League with Lockheed and never taking him out of the rotation.  He was her first level 99 pokemon and even then, I never took him out of the rotation.  He learn (or I gave him) false swipe so he wouldn’t kill wild pokemon.

Oh what powers did I give him, as I tried to make him as much like Lockheed as possible?

Those three for sure.  I want to say the fourth move was Take Down or something.  Unfortunately, I don’t believe our 3DS can play old DS games and my DS goes from various stages of being lost and found.  Having nephews who want to play the game will do that and I worry that they will save over my file and I will have to do all that work again.

Actually I want to say the fourth one was Fire Blast as I wanted him to have two flame attacks as that is really how he fights.  Crunch is the deadly version of Bite.

I finally located my GameBoy Advance and these are the official moves that I gave him :

Not bad for how close I got to what my memory was.

These two sites helped jogged my memory for this article :