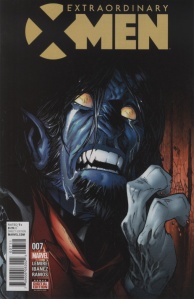 Issue opens with Jean and Storm inside Kurt’s head.  Of course, it looks like his old German town, Winzeldorf, Germany.  Jean is taking this mission to debut a new costume – as her priorities are completely right and she is the worst.  Of course, the villagers are chasing Kurt.  Jean should fit right in.

Storm tries to fight the mob, but her powers don’t work.  Jean’s powers work, so that she can show off and try to appear better than Storm.  Inside his head, we see the world collapsing upon itself.  Outside, Jean and Storm are clearly in pain and Forge isn’t happy with Kurt, who is cowering in the corner – not saying anything. 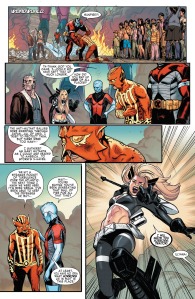 Magik has heard enough from this traitor and plans on ending the fool.  I wonder what Sunfire did that got her so mad?

Iceman and the other horrible member of the team, Colossus, tries to keep Magik away from Sunfire.  Sunfire is one of those characters that I know his history but don’t really have much reading experience with.

Apparently, Sunfire is up there with Cyclops, in terms of villains of mutantkind.

Some warrior ghosts, I guess, arrive.  Old Man Logan believes he’s getting too old for this – Iceman is already tired of hearing him say that.   I could go for some more of that, as who doesn’t love Roger Murtaugh?

One of the ghosts takes out Colossus and Magik and I try to give two shits about it.

X-Haven.  Inside Kurt’s mind.  Jean and Storm are heading towards a pirate ship.  Everything is upside down.  Caramagna should have put the words upside down too, that’s a missed opportunity – but Caramagna is one of the best so I’m sure there is a reason.  Probably that it is more convenient for the reader.  Inconvenient is one of those words I can never spell, even though, at a law office – it is one of the words I type the most.  Been that way since I worked at Northern Arizona University – Yuma Campus.   Gosh, that was ten years ago.

Kurt is in full Errol Fynn mode.  Jean and Storm follow Kurt off the ship.  Now they are heading towards a giant Cyclops. 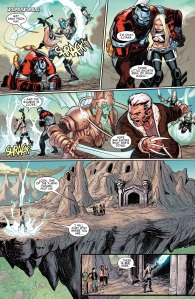 Weirdworld.  Magik, for appearance’s sake, defends Colossus.  They are powered by weak magic and the source is close.  Magik teleports to the source.

She sees an old man sorcerer.  He knows she is from Limbo.  Magik confront him for all of the mutants he has taken captive.  I thought they are just prisoners and not dead souls, at this point.  He goes all crazy on her, claiming he sees her future.

Magik straight stabs the old sorcerer with her soulsword, as she doesn’t give a fuck.  As he dies, he hints that a war is coming and the lattice will break.  Which I had to look that word up, it seems to mean wood being crisscrossed and in a square pattern.

So that’s going to fall and it is super intimidating.

Kingdoms will fall and Sapna will be no help.  So she’s going to be a bigger character in this title.  That makes sense as she’s clearly going to be the breakout star of this title.

Magik teleports back, with the rest of the Asian mutants.  Once she killed the sorcerer, the ghosts disappeared.  Poor Magik, she’s clearly upset about killing the old man, but not that upset.

Cerebra will take Sunfire and the other refugees and Magik is going to teleport the team back to X-Haven.

They teleport back and the students are glad to see them, as Kurt isn’t doing so well.

At the Giant Cyclops, Jean and Storm crawl into his ruby quartz visor.  IT is the old school 80s visor.  They have to hurry as a wave of Sentinels are on their way.

They are back in the village, but now they see that mutants are being pushed into the woods.  The M-Pox riots started in Europe, only a few weeks ago.  This is a current memory.  One of mutants promises to leave Germany, as long as they are allowed to escape.

Kurt shows up to fight the lousy European flatscans.  All of Germany is under his protection.  The one mutant wants to show Kurt what happens in the deep woods.

It is a disgusting mass grave, ya’ll!  Fucking humans.

The disgust snaps Storm and Jean out of Kurt’s head.  Jean heads over to comfort Kurt, who is finally not taking in scripture.  So that’s an improvement. 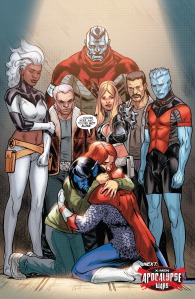 Issue ends with Jean hugging Kurt, as the team watches.  They are that type of group.

Not a bad issue, next issue begins . . . Apocalypse Wars!