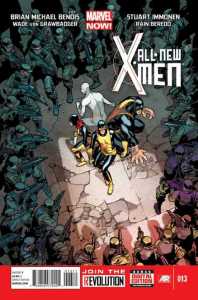 We start reviewing the comics I got for Christmas 2014!

This issue is known for Kitty Pryde’s response to Havok’s speech in Uncanny Avengers Volume One Issue 5, but we’ll get that.

Issue opens with Jean Grey going full Phoenix in a room with Mystique, Wolverine and Scott. 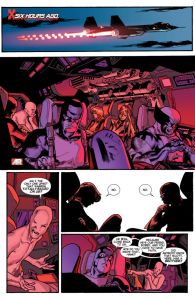 Six hours ago.  (Revenge style!) The team isn’t talking after running into the Uncanny Avengers and that Angel left the team for Cyclops’ side.  Bobby is more upset about Angel leaving the team.  Jean and Scott are not upset about it.  Hank is sure that Warren will come back.  He will take a while and a crossover but he will do it.  They’ll lose Cyclops by then, but these things happen.  Bobby is also confused as he didn’t know Scott even had a brother. 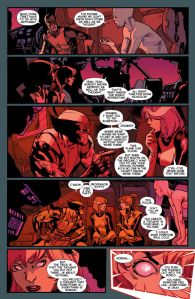 Scott is confused by what one has to do with the other.  Bobby wants to know if he even knows any of his teammates.  Wolverine admits that no one ever knows anyone, it makes life exciting.

Wolverine calls Jean, Jeannie, which confuses her.  Wolverine wants her to try to cloak their presence, once they are on the ground.  Jean asks Kitty if she can do that.  Wolverine calls her, Professor Kitty, which she doesn’t care for.  Wolverine, not that great with the ladies.

Kitty tells Jean how to do that.  Bobby tries to help out by saying he can make everyone feel cold.

Resilient International, Seattle.  Where Mystique stole a lot of Tony Stark’s money.  Wolverine explains some of his powers to the Original Four.  Wolverine smells Mystique and Sabretooth. 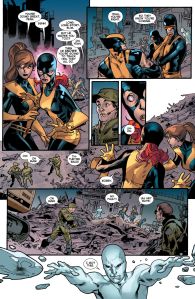 Kitty encourages Jean as she concentrates on keeping them invisible to the naked eye.

Wolverine keeps calling Scott, Slim, he doesn’t care for that either.  Scott points out that Sabretooth should be able to know that Wolverine is coming for him.  Jean loses concentration and the soldiers notice them.  They think that the X-Men are back at the scene of the crime.  They start firing on them.

Iceman creates an ice shield.  The soldiers can’t decide if they should call Maria Hill or Pepper Potts.  Kitty gives Bobby a compliment.  Scott can’t believe that flatscans just open fire.  The X-Men take off in their plane.

Mystique and Sabretooth are listening to Havok’s silly speech.  This is the speech, which is referenced here and one more time before Kitty responds to it.  The final page of this issue has the speech properly reprinted.  Which is nice that Rick Remender and Oliver Coipel was able to put the entire speech on one page. 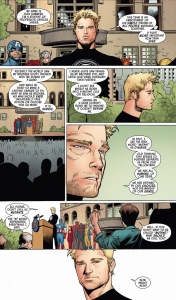 Essentially, Havok doesn’t want to be called, mutant (the M-Word) as it represents everything that he hates.

Mystique and Sabretooth don’t seem that impress.  Lady Mastermind wants to know what the entire plan is.  Mystique can’t believe that Xavier is dead.  I wonder if Bendis knows that he has married the two of them, at this point.  She can’t believe mutants are not farther along in life.

Mystique has gathered all of the cash into the middle of the room as her meeting starts.  The first to arrive is the new Silver Samurai.  He is the main henchman for the new Madame Hydra.  I don’t recognize her.  It isn’t Viper. 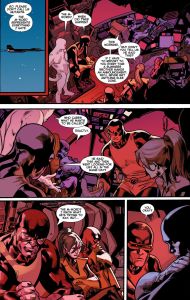 The X-Men are listening to Havok’s M-Word speech.  Wolverine knew the speech occurred.  Scott can’t believe that, in one day, that he held a press conference AND found the All New X-Men.  Hank and Bobby don’t understand that M-Word is a bad word.

I really like when the X-Men are bathed in red light.

Scott tries to reassure Jean.  Scott knows she will learn that trick.  Jean retells that she knows her future, which is her own dumb fault.

Hank wants to know if, mutant, is a derogatory word.  Bobby makes the point that any word can sound like a bad word if is said right.  Hank wants to know what the professor thinks.  I do like how earnest Hank calls Kitty, professor.  He really needs that leader. 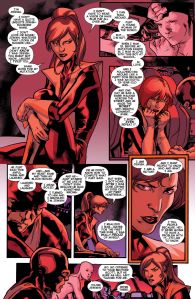 Kitty is so good at spur of the moment speeches.

Kitty tells the teenagers that she is Jewish.  She doesn’t have a Jewish name, she doesn’t look or sound Jewish – whatever that means, she says.  The same goes for her mutation, she can walk the Earth and no one would ever know she was a mutant, much less a Jewish mutant.

Kitty recounts a tale of when she was 13 (so a few months prior to Uncanny X-Men 129) and had a huge crush on a boy.  The boy saw a rabbi and made the worst anti-Semitic comment ever, and she was devastated.  While the boy was laughing, she told him she was Jewish and that shut him up.  By the time she got home, she was super proud of being Jewish and standing up for her people.  She is very open about being both Mutant and Jewish.  If someone is going to be foolish enough to have a problem with either ‘category,’ she wants to know right up front.

The scene ends on the perfect note of Bobby being surprised that she is Jewish.  Bobby Drake, is a real listener.

Over at the meeting.  Madame Hydra doesn’t own Madripoor but she is the ruling class.  Mystique wants to be the de facto leader of the island nation.

Outside and to the right, the X-Men are planning their next move.  Wolverine smells Hydra, Bobby notices they look like green Nazis, which is what they essentially are.

Kitty asks Jean to read the room’s thoughts.  Jean reveals that Mystique wants to buy Madripoor, Bobby doesn’t know what that is.  A bit much on the Bobby side of things but that is okay, he dials way back later.

Wolverine wants to go in with only Kitty, Jean tells him that Sabretooth knows they are here. 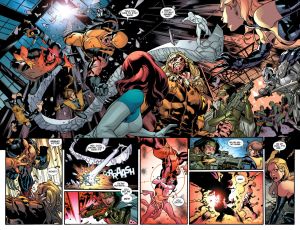 The teenagers do not listen and come with.  Wolverine fights Sabretooth.  Bobby goes after Silver Samurai.  Madame Hydra is upset with Mystique for the apparent betrayal.  Kitty undoes Madame Hydra.

The fun thing is that Lady Mastermind sees Jean Grey.  She creates an illusion of her father, the original Mastermind, and Jean freaks out.

This was such a great issue.  I can’t believe, in this modern era of comics, that Bendis went after a fellow writer, for something the writer wrote.

The Avengers titles, as Uncanny Avengers falls under that franchise, had this to say about Kitty’s speech. 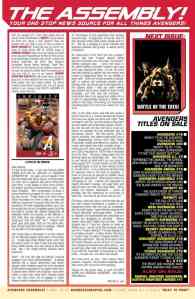 Which is pretty irritating.  Does Kitty get a rebuttal?  No.