Years Ago.  And Very Far Away.  We are given the leader of the Empirikul’s origins.  His parents were scientists in a land of magic.  They put their son and the eyebots into a ship and sent him away – Superman style.  I do like how his parents’ home is all in white (and they wear white too) and then the mages start coming in and all of this red is in the scene.

They worship Shuma-Gorath, who I recognize as an established character – he has a giant eye.  He was the threat in Wolverine First Class 12.  Such a great comic, he has mostly dealt with Doctor Strange and the Fantastic Four.

I must have read him in Marvel Knights 4, Marvel’s hardest series to do a search for.

Now, New York City. The leader, does he get name checked, I don’t believe so.  The eyebots refer to him as, The Imperator, in the Last Days of Magic oneshot.  I’ll start calling him that then.

Who will Imperator burn first?  Magik!  Makes sense to start with the biggest threat.  Bachalo draws the heck out of Illyana.  Imperator finds her attractive but that doesn’t impress Magik much.

Before fire can be set to her boots, Monako arrives – who strikes me as the magic world’s Puck but with a top hat.  He wasn’t taken captive and Imperator underestimates him.  Strange wants him to run but Monako has a plan.  Monako reveals that magic isn’t dead, it is merely hiding. 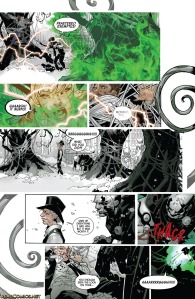 Monako uses the last of his magic to teleport the captured heroes away.  Imperator, a word I just can’t keep in my head.  It usually means a great general or emperor – an empire’s commander.  Imperator is going to give Monako a world of hurt!

Strange is adamant about getting back to Monako, Magik seems to be in shock.

Imperator tells the eyebots to search the entire planet for the mages.  Smart to go to Strange’s Sanctum Sanctorum.  Zelma hears the droids and goes into the cellar to hide.  Even though the door to the cellar is clearly marked “NEVER ENTER” she does it.  I imagine she didn’t read the door. 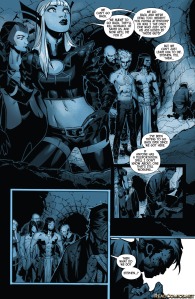 Damion Hellstrom wants to honor Monako’s memory by moving forward.  Magik wants to go back to save Monako.  Strange is all for going back, but no one hasn’t a teleportation spell they can cast.  Which is insane!  Magik’s teleporting has nothing to do with magic, that relates to her mutant powers – she has never had to say a mystic word to port around the place.  Why doesn’t she left her soulsword and teleport out of there?  Bachalo should have told Aaron that, or maybe an editor?  Maybe that’s why Illyana is never involved in these situations or crossover, she’s to powerful.  Everything turns to Strange for guidance.

Meanwhile, Monako is putting on a brave face to Imperator, who has tied Monako to one of those trees of his.

Strange jumps off a ledge and lands on a hidden platform, which confirms that magic is still around.  He wants everyone to split up and find as many mystical items as possible.

Magik, who can be a downer from time to time – she had a rough childhood, doesn’t believe they stand a chance.  Maybe she could call in the X-Men and the Guardians to save the day?  What are they doing where they can’t help out?

Issue ends with Monako burning on the stake.

Hopefully Magik keeps appearing in this storyline, as it is getting good.  I may have to read issue eight, even if she isn’t in it.