Out of Orbit, Chapter Two

Issue opens with Rocket and Groot playing a table top game.  Rocket is still upset that StarKat has broken up, as they were so happy.

The Collector, looking more like the Joker here than himself, wants to know why the two Star Lords broke up. 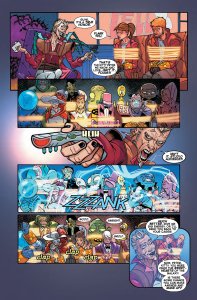 Pryde has learn how to swear in other space languages, it is because she hangs out with Rocket so much.

In the audience, we see Doop, the truly horrible Starfox and Gatecrusher & Hard-Boiled Henry (the Tweedy Bird looking fellow).

Collector wants to know if there is any chance the two of them will get back together. 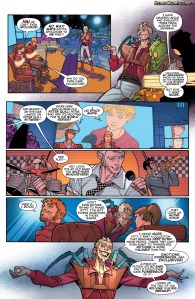 Both Star Lords want the other to apologize.

Collector has quite the collection and now he is moving onto higher concepts.  Collector was quite taken with Quill, having recently learned his origins.  So I’m taking it this storyline is going to havesome meta references.

The Collector wants to relive their big breakup.

Pryde calls the Collector, a creepy emotional vampire.  Pryde says some harsh things, but dead on, about how she doesn’t want her personal life to be yet another part of some spectacle for a lonely, pathetic, emotional stunted fanboy.  So there’s some meta there, I hope I wasn’t part of that group.  Especially as I’m not all that lonely or emotionally stunted.

Collector turns on the shock treatment and it must have really hurt as look how distraught Kitty looks in the middle panel.

Quill whispers his plan to Pryde, to stall and make up things to buy time.  Quill says he will protect her but she counters that she’ll end up protecting him – which has to be true.

Quill clicks his boots together, which should be sending a distress call.

Collector threatens to rip them down to the molecule level, if they don’t share everything.

Collector reveals that Skrulls are going to be performing reenactments.  They were also the ones who were fighting the Star Lords in former costumes.  They are the Skrull Dining Theater Thespians.

20 Minutes Later.  Quill fakes that Pryde broke up with him as he cheated on her with all three – She-Hulk, Storm & Scarlet Witch.  Kitty will hate both the player and the game.  Which is a super fun line!

Pryde is ashamed and insulted that is the story Quill made up. 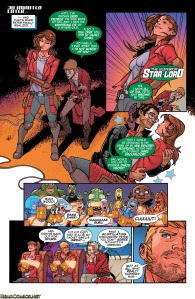 20 Minutes Later.  So I imagine that they have to write the story, someone turns it into a script and then the SDTT rehearse it and we are seeing it now.

Quill confesses why she should break up with him –

Pryde could be dating a younger version of Jeff Goldblum.

This begins the two of them trying to one up the other.  Quill tells that Pryde couldn’t handle his success as a football player, she being his cheerleader.  Pryde, as Captain Marvel (Carol’s current costume) punching him in the stomach, as she was too intimidating for him.  Which I can totally buy.

Quill says their schedules couldn’t match – we get a bit of a Slave Leia Pryde.  Pryde says they were in different places in their lives.

The two start just shouting differences at each other. 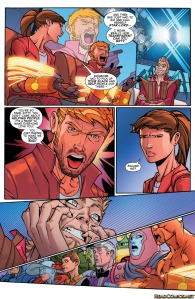 Quill is clearly really upset that she stole his hero name and look.  Pryde repeats that someone had to pick up his slack.  Quill, maybe revealing some secrets here – states that Pryde doesn’t care about helping people, she’s all about making sure people love her and to make him look bad.

This stuns Kitty, as clearly anyone would love her if you just read anything that features her.  She’s the best!

Pryde starts to cry, as Quill is a big time jerk.  She made him look bad as she is clearly better at him at so many things. 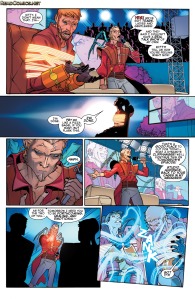 Quill tries to apologize.  Collector wants to know how Pryde is feeling and she’s simply done.  She’s willing to be fried to death, to just end this.  Collector must be a good host and producer as he calls this a day.  The two get another shock treatment. 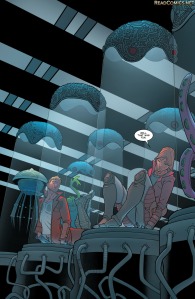 Pryde repeats Quill’s foolish plan.  Quill was faking his rage but then some hard truths came out.

Collector wearing that, what is it, a bathroom?  A skimpy robe of some tiger print – it is not very flattering.  Reminds me of something Joan Rivers might wear, which isn’t great.

Quill tries to threaten Collector but he is only here to talk to Pryde.  He wants to give her a tour of his collection.  He wants to show her Puck’s ex-wives axes and Wolverine’s browser history – neither sounds all that interesting. 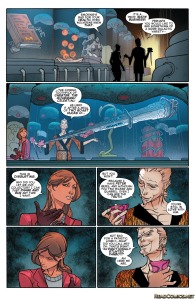 She does take him up on his offer, I imagine as it is something to do.  Pryde threatens to phase away but he knows she won’t do that, as he still has Quill captive.  Collector knows that Pryde still loves Quill.  Which may be true but people break up with those they love, as life happens.

Collector offers to free them, if she reveals the truth of why they broke up.  If she doesn’t, he’ll keep her as part of his collection and kill Quill. 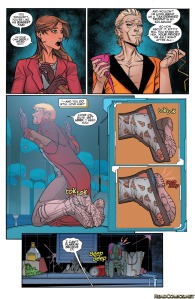 Collector reoffers for her to tell him the truth.  Meanwhile, Quill keeps clicking his heels.

We catch up with Rocket and Groot, as they are too busy fighting over their game (well, Rocket is the one fighting Groot) so the call goes unnoticed and unanswered.

Really enjoying this arc so far!