Whose bright idea, for Dale Keown’s variant cover – featuring the Guardians as Apocalypse’s Horsemen, to include every single member but the one I care about?  That seems so odd to include Grimm but not Pryde.

The team has split up on a Badoon prison break.  Pryde and Quill got some prisoners freed but Quill has been taken captive.  Grimm and Rocket were super successful.  This issue gives us Agent Venom and Groot. 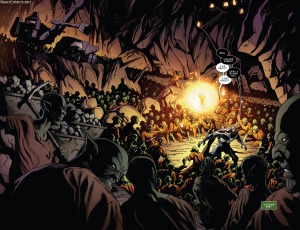 The double page spread that starts this issue, ends the issue too – classic Bendis move there.  Of course, with the second one being with a different context – we’ll get to that. 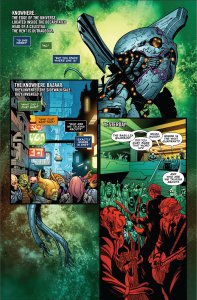 Knowhere.  The edge of the universe.  Located inside the decapitated head of a Celestial.  The rent is outrageous.  The Knowhere Bazaar.  They invented the sidewalk sale.  They invented it.

Yesterday.  The Guardians are sitting around a table. 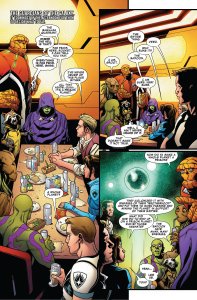 The Guardians of the Galaxy.  It took most of the afternoon for them to decide what to eat.

Gamora is telling them that they have to go to the Basillza Quadrant.  Flash and Grimm express that an entire planet that is a prison, is a tad hard to believe – it does cause a lot of internal questions of how the day-to-day operations work.  That has to be very expensive.  The Badoon, who seems to be the Guardians greatest foe, run the prison planet. 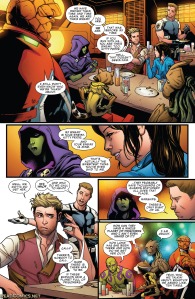 Pryde decides to draw an odd line in the sand, the enemies prior to her joining the team and the enemies after she joined.  That isn’t how it works, which is what Gamora tells her.  This issue must come before the backup in Guardians of Infinity 7.

Gamora tells Pryde that any enemy of hers is an enemy of Gamora’s and vice versa.  Pryde recognizes that as a very nice thing for Gamora to say.

People start asking who the “she” is that they are going to save but I’m not sure if us readers know who that is suppose to be.

Flash isn’t sure how these eight Guardians are suppose to take on an entire planet.

Gamora explains why they can’t get an armada together.  Last time people tried a prison planet break, the Badoon straight up exploded the planet – killing prisoners and guards alike.  The Shi’ar, the ones trying to do the rescue, lost people as well.

Gamora, very dramatically, finally lefts her hood – I guess she was waiting for the perfect time to hold off the reveal.

The team is splitting up, Flash gets Groot.  Flash makes an aside to Rocket, that he still doesn’t understand anything Groot says.  Rocket tries to give some advice but Flash isn’t sure if he is suppose to believe it.

So Rocket will break away with Grimm and Drax & Gamora will be the team for next issue.

Agent Flash and Groot jump from the ship and Venom’s suit turns into a glider.  Once they land, Venom starts narrating, aloud – probably trying to communicate with Groot.

Venom finally sees who the prisoners are, Skrulls, which Flash still holds a grudge against for both Secret Invasion and for them trying to steal his symbiote.

There is an aspect of this, where Flash comes off a tad racist towards Skrulls, he does come along though.  The Badoons have successfully taken away the Skrulls ability to shape shift.  I like how Flash uses the term “shape shift” and one of the Skrull prisoners says “we can no longer shift our shape.”  Something about writing it another way, really bring out how silly an expression shape-shift is.  It is up there with brainwash, how silly but effective. 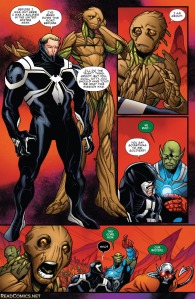 Flash Thompson will be the hero, this day, but Pryde and the other should have told him who they were saving.  This would probably mean more, to me, if I knew what happened to him and the Skrulls – exactly.  Is that how he lost his legs?  I thought he lost them during the Iraq War?

The Badoon arrive and Agent Venom & Groot start fighting them off but the Skrulls rise up too.  They successfully fend them off and Venom is ready to free all of the prisoners.  One of the Skrulls replies “all of us?” and leads the two Guardians into the caves.  We get the dialogue from the above double splash page – where Venom blames Groot.

This time, the dialogue changes to Agent Venom stating that everyone is getting freed today.