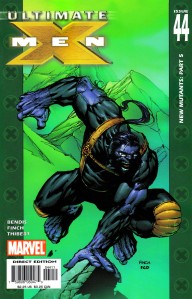 Issue opens with Angel and Wolverine in the Danger Room.  Angel wants Wolverine to train him so he can fight better.  Once the claws snikt out, he gets scared and wants to stop.  Wolverine ends the session by showing how in control of his claws, he is.  Wolverine smells a familiar scent.

Fury is talking to Xavier while Storm, Jean and Cyclops listen.  Fury wants Xavier’s help with a delicate situation.  Wolverine was attacked during Bendis’ Blockbuster arc and Fury believes he knows who may have been behind it.  He believes there is a fraction of high rank government officials.  The fraction under the impression that Xavier may be manipulating the President, as Xavier manipulated the world into believing Magneto was killed on live television.  The President is Pro-Mutant now, and they find that suspicious.

There is an ad for Encore’s Daredevil video game, that never came out but I wish it did.

Fury knows Xavier isn’t doing any of that type of activity.  Fury isn’t able to confront this group directly.  The group has high ranked military officials.  Fury can’t make a move without proof.  If he did, he risks being decommissioned, detained or even, court martial-ed for treason.  Worst, the group could go back into deeper hiding.  Fury can tell Wolverine is behind the door.

What is bringing all of this to a head is, the President is going to announce a new mutant education program.  He has a group of young mutants, who are lead by Emma Frost – who Xavier has a history with.  In the Ultimate Universe, Xavier got himself around.

The President is trying to distance himself from Xavier.  The students are Beast, one of Fury’s trainees and Havok – who Cyclops doesn’t keep in touch with.  Xavier wants to know what he should be doing about all of this information.

Fury can’t confront the group and he can’t warn the President without tipping the group off.  He can’t have his people make a presence as that would alarm the group.  Fury can’t, legally, enlist the X-Men, as they are civilians.  The President is holding an outdoor press conference on the steps of the Capital Building to announce the new agenda.

Fury is worried about the President’s safety and the safety of the students.  His hands are tied and he can’t tell Xavier Xavier about any of this.  He wants to know what Xavier is going to do.

The President is making his speech. 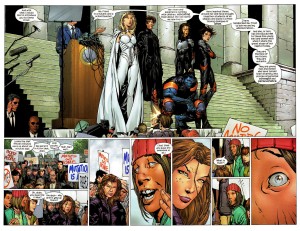 The President (Bush 43)’s face is covered as the policy in the Ultimate books is to try to keep the comics evergreen, which is silly.  I get, like with the original Spider-Man clone saga, that there is a scene where President Ford makes a speech, which instantly dates the comic.  But how many winters have passed in the Ultimate Universe?  Marvel is so silly with their sliding time scale but they are stuck with not wanting to lose their properties.

Next to President Bush is – Emma, Havok, Beast and two unnamed ladies, one looks like Dazzler.  Marvel Database confirms Dazzler and the other is Karma, which makes sense with what I know is to come in this title.

There is a kid in the audience who recognizes the X-Men and asks Kitty why they are not on the stage.  He is a big fan of theirs, as they are awesome.

A Sentinel arrives, the President is moved to safety.  Xavier shouts to the X-Men to save the day.

The Sentinel eye blasts the steps and Beast is struck.  Wolverine tells Angel to fly him up.

Angel learns how heavy Wolverine is and can’t fly up high enough.

Issue ends with Beast dead for the first time, he will come back in like twenty issues and will die in the first issue of Ultimatum.

The Second Ever X-Men Letters Page has letters from – Lindsey Douglas of Myrtle Beach, SC / Patrick Guaschino / Roland Shum / Ann Nichols of Sierra Vista, AZ / Hubert Tyrelle of Charlotte, NC / Adam Weinstein / Craig Yoshihara of Atlanta, GA and finally, Ame and Eric.  Eric wrote a letter that was printed in Ultimate X-Men, wherein he proposed to Ame and on this page, we are told that she said yes.  Congrats you too!  That is a pretty cool!

The back cover ad is for the Thomas Jane Punisher film, which I still really like.  I like how, if you combine this film with Punisher : War Zone, you essentially get the Welcome Back, Frank storyline by Garth Ennis and Steve Dillon.