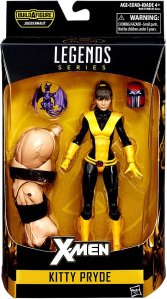 My wife was sweet enough to ask me what Kitty Pryde merchandise do I not own, and while showing her my “Wishlist” tags on this site, she noticed that I still had this toy listed as a Wishlist item.  I told her that I do a follow up “Bragging Rights” post when I actually received the item.  There isn’t a way to check the post or something like that, to show that I now own it.  Well, I could edit the original post, but then, that doesn’t pump the original post or something.  Plus, it gives me another post, and that’s always nice.

What isn’t nice though, is that I never got around to bragging about my awesome wife buying this for me!  I think what stopped me was that I wanted to take a picture of my dorky self with it, and use that image for it.  The year prior, so two Christmases ago, my wife got me the Kitty Pryde Marvel Bishoujo Statue and I had her take a picture of me then.

Last year though, I had a phone that allowed me to take selfies and I could have done it myself, awkwardly holding this toy in one hand and a camera in the other.

My lame excuse was, I should have just asked her to take the picture of me and moved on.  I’ve had plenty of time, I just didn’t do it.

Now ten months later, I’m finally getting around to writing this post.  I’m an arse.  And a jerk!