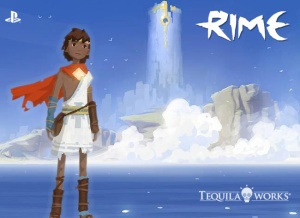 This morning, we got my 12th platinum by successfully doing everything in RiME!

My concern about looking up YouTube walkthroughs turned out to be legit as once I looked up one video, I essentially just played around with the video as I watched it.

Huge thanks to YouTubers Sylvain LUCE and PS4Trophies for their most excellent videos.

Thanks to Sylvain LUCE’s above video for Chapter 2.

Without this video, I never would have gotten through to the rest of the game.  I got stuck right at the 23 minute mark, as I just couldn’t figure out where the box thing was.  Turns out, you had to climb a wall, hide in a shadow, or the eagle would get you.  Then I just watched the video all the way through.

I successfully got through Chapter 3 on my own.  I figured I’ll go back and get the collectibles later.  But the entire time, I was thinking I should just play and watch a video at the same time, as that would save a bunch of time.  I had the thought so much that I did that for Chapter 4.

Thanks again to Sylvain LUCE for his video.

The title states (with trophies) but unless I completely missed all of them, he didn’t make a great deal of getting the bonus trophies like Racing and From the Sky to the Abyss, but that’s only two trophies but the video is amazing for all of the collectibles.  To the point that I got the From the Sky to the Abyss, was struggling with getting to all of the fox statues, did three of the five of them, I was tempted to get the above video reloaded but realized I had all of the collectibles and quit the chapter.  I wasn’t going to do the last 30 minutes when I just needed to wake up, load Chapter 5 and get the Platinum.  I waited until Walker Dennis was up and let him actually do all of the walking for Chapter 5 and five minutes later, we got the platinum.

So Sylvain LUCE did a great job with the extended walkthroughs.

PS4Trophies does a great job of just showing you just enough to not spoil the game but to give you the context to catch up to where you should be for the video.

Walker Dennis helped a lot with the first chapter, if you are looking for a game an almost five year old can play, RiME is up there with most LEGO games.  He had trouble with the more complicated puzzles but I did too so the game is pretty challenging even for a 36 year old.

This game has a lot of humor in the first chapter that I missed, there are also no real beacons of where to go next, but the map isn’t crazy large (unless you are looking for collectibles).

I would highly recommend just playing the game, you probably won’t stumble across as many collectibles on your first playthrough but I really enjoyed the sense of accomplishment of figuring out puzzles on my own.  But I also didn’t miss it during my complete walkthrough of Chapter 4.

That Chapter 2 though, seriously kicked my butt, it definitely has the most complexity of the four chapters.  Four’s maze of finding the five fox lights (like the first chapter, in a nice bookend), gives it a run for its money but that’s mostly because it is just columns and dark and rainy, whereas Two has lots of side options you can get lost in.

Honestly, without these two videos, I would be lost, and again, there was a moment when PS4Trophies made a jump cut that I had to pause and figure out how he got there.  Apparently, there is a structure with a sun emblem on the side of a wall, that without that clue, I couldn’t progress to the final section of the chapter.  It is at the 12:20 time in the above video.  I must have ran past it so many times, thinking I knew what to look for but clearly not.

Someone on reddit told me the other two chapters are easy in comparison and they were not lying about that.

Thanks to PS4Trophies for the Chapter 3 video.

Turns out, his name is Brian and has a Patreon page:

Which I thought was the website I go to for most of my walkthroughs of other games but that would be:

Which wasn’t as similar of an address as I thought it was.  PSNProfiles has spectacular walkthroughs as well.

He’s also on Twitter so I figured I’ll follow him there.  I’m also trying to remember what other game I would have watched one of his videos for but RiME is pretty much the first game I actually watched a video for the sole purpose of assisting me with trophies.  Usually, I’ll watch game footage for games I want to play or am playing but don’t have time to play the game myself but just to watch someone else play.

So I didn’t really need his video for Chapter 4 except for the Racing trophy, which I figured I already knew how to do but it was the Sky to the Abyss trophy that eluded me.  That happens at the 4:56 mark.

After seeing so many photo mode photos from the newest Spider-Man game, I’ve started taking screenshots of my games too.  I need to upload them but I was worried about uploading photos that could be considered spoilers.  But then why take the photos?  I’m not sure.

RiME was a free game through the PSN way back in February 2018 and it has taken me essentially eight months to do this but really, a matter of weeks is all it takes and that is if you are taking your time with the game.

That true ending of RiME is super heartbreaking, especially after seeing the third person in the keyhole storylines and I’m going to have to look at those again in one sitting (thanks to the Extra menu).  That poor man, I would create an elaborate mindscape too!

I’m still making my way through Batman Arkham Knight, probably just exclusively focus on that game until I finally beat it.  I’m still committed to not doing that much in terms of trophy hunting, I’ll see what I get and what I’m close to getting, but these games like this and Grand Theft Auto, I’m never going to get the platinum for.  I’ll say the same thing for Fallout games but I’m three for three on those so there’s something different about that.  I imagine the lack of collectibles and lack of side combat challenges helps with that.

I completely messed up on my third Firefly mission and instead of chasing him all over and pressing the eject button and tackling him in the air, I pressed eject super early and flew/glided right past him, like a real dummy.  So I’m hopefully I get a second attempt to catch him.

According to PlaystationTrophies.org, there are no missable trophies, so I’ll probably have to load the game and hope that it resets after 24 hours.  That was one of the other reasons I pushed RiME back up on the list, I was going to wait until the weekend but I was hoping playing another game, would reset the ingame clock of Arkham Knight and Firefly would be there when I get back.  Hopefully by the time I get the game started tonight, it is back.

I believe this is the fire station on Founders’ Island that I missed Firefly at.  It looks almost close enough that Ghostbuster loving Walker thought it was the Ghostbuster station. 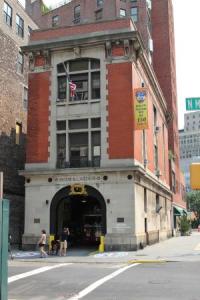 Which he’s been on the look out ever since I made the mistake of showing him that the fire station is in the PS4 Spider-Man game.

Thanks to Ghostbusters News for hosting the above video!

Super fun that they threw a picture of a ghost on the back of the building.  As the building really is Firehouse, Hook & Ladder Company 8’s proper fire station.

But as a guy who will most likely never go to New York City, it will forever be the Ghostbusters house in my mind.

So that’s nice that fire stations all share similarities in both life and in fiction.

Someone did point out since Sony owns both the Ghostbusters franchise and the Spider-Man game is a Sony PlayStation exclusive, they could have easily made it the official Ghostbusters building and it wouldn’t have required too much negotiations.  I imagine Sony wanted to honor the brave firefighters who call the building their home and threw in the ghost graffiti as a nod that they know other people know the building as something else.