Wolverine and the X-Men

I have these issues on my Wishlist :

1 the Nick Bradshaw Variant, 2 the 50th Anniversary Variant, 3, 4 the Venom Variant, 25 the McGuinness Variant, 32 and 36 the Kris Anka Variant.

Once I own the 25 Variant, then I can get rid of the issue proper as Kitty doesn’t appear in it besides on the last page with the names of faculty members.  The variant has a picture of Cameron Drake, her and Bobby’s son.  32, I need as Hastings never got that issue in.

Of the 43 issues, Jason Aaron wrote every issue.  Which is pretty impressive at modern day Marvel.

Actually the only issue Aaron didn’t write was 27U, the Age of Ultron tie in which I don’t believe should count against him.  Art for that issue was done by Paco Medina, Jack Kirby and John Buscema.

Storylines included Regenesis, Mutatis Mutatandis, Avengers Vs. X-Men, the unnamed Frankenstein Monster arc, Savage Learning, The Hellfire Saga and Battle of the Atom.  Including the Annual, which was the title’s Infinity tie in.

This was the core title, once Schism happened, that Wolverine’s side had.  I was a huge fan of the title, then Battle of the Atom happened and Kitty changed sides and I quit reading the title as she no longer appeared.

Issue 17, the Doop issue, is still my favorite of the run.

Thanks to this title, not only did I gain a new found appreciation for Doop, we got to see Kitty become the Headmistress of the Jean Grey School, see her go from her red phase to a pink phase, Kitty officially getting over Colossus so we are now done with that relationship, Colossus as one of the Phoenix Five place crab legs on whales and most importantly, I discover Nick Bradshaw and fell hard for his art style.

Wolverine and the X-Men 42 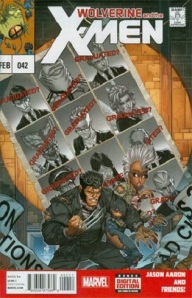 No Kitty or Lockheed this issue, but I am a sucker for Uncanny X-Men 141 homages.  Also, I adore the throw back character box with Doop.

Issue opens with Wolverine and Oya in the future.  She has to be in her late twenties, so it is at least ten years in the future but Wolverine looks like he is in  his eighties.  The two of them are getting ready to close the Jean Grey School as it hasn’t had a student in years.

During the present day, the Jean Grey School is celebrating its first graduation.  I really like that you see some parents show up as I worry about how the X-Men sort of force its members to abandon their families.

I like how both of Eyeboy’s parents wear glasses.

Quentin Quire is hating his life.  He use to be the next big mutant threat and now he hasn’t threatened anyone in months.  Oya shows up to be with her boyfriend and try to cheer him up.

In the background, Krakoa is throwing kids in the air, so fun.

Fantomax is there to be Genesis’ parent, which he sort of is.  Brand is there to be Broo’s parent.  Fantomax would like swap parenting tips with Brand, she wisely turns him down.

Quire confirms Oya’s family is dead, which is a mood killer.  Hope, in a very nice dress that resembles her hero uniform.  Hope and Oya hug, and now Quire is alone again.

Once you graduate, you becomr an official X-Man.  Those who graduate this day are – Pixie, Armor and Anole.

Quire hates how this day is unfolding.  Captain America shows up to chat with Quire.  Quire hopes that he is there to arrest him.  Instead, Cap is there to hang out and be Quire’s parent for the day.  Quire has fallen even farther than he thought.

Logan calls Quire to the stage.  On stage along with him are Rachel and Storm.  Quire is graduating today as well.

In the future, Logan is shutting down the Danger Room.  He informs us readers that Beast died, but after losing the rest of his marbles – which makes perfect sense.  Oya asks what are his plans for the Bamfs, who are also old.  They are apparently quite rich with Wall Street jobs.    Krakoa left the school some time ago, he fell in love and now has a family of small islands in the Caribbean.

Oya starts telling him while some X-Men couldn’t make it.  Broo is the head of SWORD, and Mars is invading Venus.  Kid Gladiator is now Super Gladiator, and punching Thanos.  Sprite and Rockslide are on duty in Subterranea.

Then we get confirmation that this is the Battle of the Atom future, with a reference to Iceman having his ice castle.  Storm apparently does something that the world witnessed.  There is a hint that Genesis doesn’t turn out well.

Logan tells Oya that they were the only odd school at one point.  Now the Fantastic Four’s Future Foundation started a school in the Negative Zone with four billion students.

Oya gets a phone call from Eye Man and Shark Woman, they need her to join them as they are fighting a new Brotherhood led by the terror that is Snot – he with the toxic nose excursions.  One of the Bamfs teleports her to the battle after she kisses Logan on the cheek.

Now Logan is alone with only the Bamfs, there is only one last thing to do.  In his office, he is doing whiskey shots with the Bamfs.  Then a giant DOOM sets off the alarms.  Logan starts popping his claws.  We get a sad, sni, as it takes a while to get the claws all the way out.

Quire is there, and he still has the powers of the Phoenix.

In the present day, Quire is still upset that he is now a graduate.  Logan finds him and tells him that now that Quire is an adult and responsible – the world will fear him again.

Oya catches up to Quire, she wants to see his diploma, he claims he burned it.  Then he starts to get harrassed by his student body.

Logan starts sneaking away and Storm stops him.  He isn’t going to be sneaking away this day.  She tells him he is no longer Weapon X, he is now Professor Logan.

In the future, Quire snaps his fingers and tells Logan that he enrolled the mutants of the Negative Zone and now the Jean Grey School now has two million students.  I like how it is a next page reveal, and we see that the students are actual Negative Zone inhabitants.  I had thought Reed had open a school in the Negative Zone, due to lack of space on Earth, like Prison 42 during Civil War.

Logan fakes anger, then Quire leaves and Logan is happy to be teaching again.

Issue ends properly with two pages done by Chris Bachalo, the artist who started the title.  Turns out, Quire did not burn his diploma.  Logan pops his claws, as he didn’t do it at all the other day.

Then we are ‘treated’ to things to come in the second volume that comes out immediately after this issue.  I do like how Aaron got to write every issue of this volume, so it makes sense to end it with his last issue.  I don’t see myself buying any of the initial issues of volume two, but time will tell.