So we finally made our way to Missoula, so I was able to visit Muse Comics.  It wasn’t a bad store, they only had year old comics but I was able to get this issue and Guardians of Infinity 4 that I thought I bought a while ago but didn’t.  I bought the second print of this issue, which I’m still debating if that bothers me or not.  Not like I ever plan on reselling this comic so I’m fine with it.

The recap page pokes fun of the eight month jump from Secret Wars 2016.  Rocket and Groot have disappeared.

Eight Months After All That Crazy Secret Wars Stuff.  The Guardians, including Pryde, are under the impression that Rocket and Groot are dead.  Which seems silly, to me, especially from Pryde – as she knows so many people who have come back from the dead.

Grimm being, rather grimm, says he isn’t that affected – which seems super messed up.  This is a rushed funeral for crying out loud, have some respect.  So this is eight months later and Grimm has known them that long, so how long have they been missing?  A week or two?  They don’t even have bodies to put in the makeshift coffin.

Pryde gives Drax a moment to reflect on his two would-be fallen allies.  Drax points out that Rocket loved that gun on the table and Groot was a tree person who only said the same words over and over.  With that, Drax walks away.  Agent Venom has been with the two title characters for a few years now (publication years, that is) so he should be pretty sad too.

Pryde pulls a lever and the coffin goes out inot space. 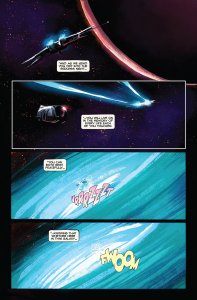 Pryde says a small speech – as she’s amazing and awesome – that covers this page and the next one.  Heroes do live on in the memories of those who they have saved.

Pryde’s speech include show Rocket and Groot can never been replaced.  Which transitions us to Pockets the Mouse and Shrub who only says “Me are Shrub.”

I do own the fourth issue of this series, so I know how this storyline ends.

Pockets and Shrub’s ship flies through the coffin.  Their ship is being chased by another ship.  They finally get to Harren-3, to receive an item.  Th person they are being paid buy sure does look like Groot, if he was one to wear a hood to conceal his identity.

The Next Morning.  Now they are heading towards C-23.  They are going to meet a Lord Rakzoon.  If you pronounce that aloud, you may get a hint of who that is.  Pockets and Shrub think that name is pretty crazy-arse.

Lord Rakzoon is told by another trooper that the pair was here to deliver him an item.  So they shall still be tortured but not killed.  The trooper is still going to be killed, for name calling.

In private, Lord Rakzoon opens a cage and sees Groot!  I do like how Lord Rakzoon asks who he is, setting Groot up to say, I am Groot!  Poor Groot, someone has gone and craved random words into his bark. 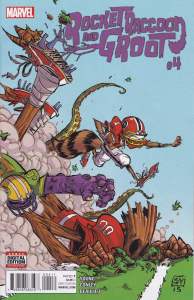 Last issue didn’t end with a cliffhanger, like I thought it did.  Instead, we are treated to a done-in-one issue.

The “Hills of Thoron.”  A group of heroes are playing a non-copyright infringement version of Dungeons & Dragons.  I wish we got a page with the in-game character with the comic character, so we know who is who.  Magik is the blonde with the giant sword, so that makes sense.  She’s the only one that matches but Illyana essentially is a sweet D&D character.

Rocket is the main wizard and Tony Stark is the green goblin.  Tony, like the douchebag that he is, is the traitor of the group.

Since Tony doesn’t quite get the game, he turns into Giant Iron Goblin and ruins the game.

They were in a conference room the whole time.  The other heroes are – Deadpool, Rocket, Thor, Magik, Tony, Beta Ray Bill, Pixie, Wanda, maybe Squirrel Girl or Ms. Marvel (she’s the only character I don’t immediately recognize), FalCap, Miles Morales Spider-Man and Groot.

Tony is still trying to defend his traitorous turn but Rocket is upset that he isn’t playing right. 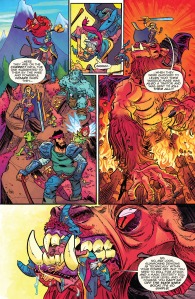 They try to start another round of the game but this time, Magik is the traitor!  Instead of ruining it, she’s totally awesome at it!

Magik leaves as playing with demons is much preferred to this table top game.  I wouldn’t mind seeing this group of heroes hang out, without Tony being around.

Tony and Rocket get into an argument which ends with Rocket agreeing to join Tony’s Fantasy Football game.

Rocket and Groot are on their way to a planet that is an entire football field.  Rocket has spent most of the day reading up on stats.  Instead, they play football

The Coach, who may be the Character Find of 2016, is all about heart and he is super fun!

Rocket ends up winning the game, which makes sense.  Now Tony has to play the wizard game, Rocket’s way. 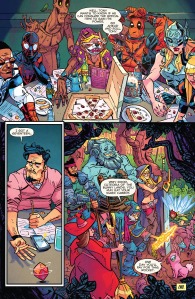 The same heroes return for another game, this time, Tony is a cute little bunny.

I do like Skottie Young as a writer, this should be fun to see him on writing chores but not also on art.

Fun way to do a recap page, with Rocket explaining the story as a campfire tale.  Earlier in the series Rocket and Groot are presumed dead, the Guardians put on a funeral.  Kitty was there, so I now have to track down the first issue of this series.  Hopefully Hastings owns several of those, as it is the first issue, I’ll find out on Saturday.  In reality, they’re back in time and in space.  I guess they were always in space – but are we all not in space?

Last issue, Groot is on an alien planet and becomes the prisoner of Lord Rakzoon, who is Rocket – but without the memory of Groot.  This wouldn’t be so bad, but Rakzoon doesn’t recognize Groot, and his favorite thing to do is sentence folks to death.

The guards are making fun of Groot. Groot says his name, like he always do, but it doesn’t phase Lord Rakzoon.  Rakzoon does recognize Groot’s language.

Rocket goes into what happened, I guess this series spins out of Rocket Raccoon 5 – thanks Jake T, the editor.  I also guess that Rocket recognizes Groot now.  Rocket ousted the old dictator, by tricking the inhabitants that Rocket was worst than the last guy.  While explaining all of this to Groot, the guards don’t take kindly to be tricked.  Rocket and Groot make short work of the guards.  Rocket always has a plan.

After the guards are dealt with, the previous dictator arrives – as Rocket clearly didn’t murder the guy.  He has a mouse companion and a fuzzy green guy.  The previous guy’s name is Nasoj.  The shrub fellow can only say “me are shrub.”  The mouse’s name is Pockets.

We get the face off of Pockets v Rocket and Shrub v Groot.  Pocket, is a possum, it turns out.

Nasoj tells the guards to kill all four of them, which Pocket didn’t see that coming.  Oh I get it, Possum + Rocket = Pocket.  Pretty clever, Young!  Pocket is also known for having a plan.  The four start running away.

Eventually.  They locate Pocket and Shrub’s ship.  Pocket doesn’t want our heroes to come with them but after a fight, Rocket takes their ship and flees.  Pocket swears revenge! 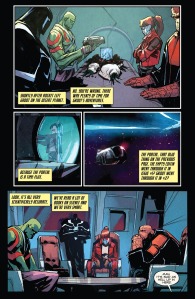 Shortly after Rocket left Groot on the Desert Planet.  I guess enough time has passed that the Guardians (including Star Lord Kitty Pryde) put on a funeral for Groot.  In comics, I just assume that a full year has to pass before one suspects a person to be dead.  That’s just me, people fall into pocket dimensions all of the time.

Those yellow captions are pretty funny! 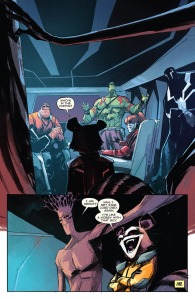 Issue ends with the team being reunited.  Rocket suspects that Quill is in the coffin. 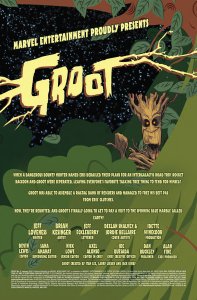 We skipped issue five, so this is what we missed.  Pretty much, Groot and his new pals saved Rocket from Eris, now they are back on track to visiting Earth.

As the two fly away, Eris plans on a rematch.  Rocket wakes up Groot, as they have arrived on my favorite planet.  The first hero they come across is Spider-Man, with Iron Man flying in the background.  The two of them have a list, as they took suggestions from their friends.  Quill recommends they check out one of his favorite country bands.

Carol lets them stay in her place, which is in the head of the Statue of Liberty.  She also tells them to watch a movie and eat a pizza.  They end up watching one of the Star Wars films.  I imagine, New Hope.  They have a fun exchange over who is Chewbacca and who is Han Solo.  I like that Rocket doesn’t know what a movie is, which does feel like an Earth form of entertainment.

Gamora and Drax recommend that the two get into a super villain battle.  With one punch, Groot takes out The Clam.  Rocket doesn’t think this should count.  So they go after Scorpion, Sauron, Whirlwind, Grey Gargoyle, a Reaver and Razorback – I had to look up that last one.

Groot’s heart isn’t into the fight, Rocket is having a great time.  Scorpion isn’t the man I’m thinking, he states that he found the costume in a landfill.

Groot wants to get back on track, to find the Earth lady who was kind to him, in the past.

Before they get to that, Kitty Pryde had a recommendation.

Pretty great turn out, of X-Men.  Beast is there, as is Nightcrawler, Dazzler and Jubilee.  Colossus, Wolverine’s chrome corpse statue (but not in the position he should be in), Glob Herman, Broo, Iceman and Quentin Quire.

We get a very terrific moment with Teen Scott talking to Teen Jean, he’s so awkward.  To make it better, Groot gets to finally talk to someone, with words us readers can understand.  Groot repeats a compliment Scott told him and now Jean will help him find his friend.

We get a flashback to how horrible Groot’s people are.  Groot is the Warlock, of his people.  At one point, the a human girl was taken prisoner.  Groot gave her a flower and befriended her.  Helping her escape, he got beaten but not before giving her a pretty bouquet of flowers.

Groot eventually left his people and found the Guardians, and has been pretty happy ever since.  But now he wants to find that little girl.  Turns out, the flashback was between fifty and sixty years ago as that little girl is pretty old now.

The two of them have a nice chat, under the tree that she planted with the flowers he gave her.  As the issue ends. 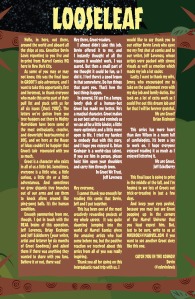 Not only does the issue end, but the entire series is now over.  Of the six issues, I only didn’t buy issues one and five – I know Hastings has those issues – I may just end up going back and getting those as this was a pretty good series.