Excalibur “Having a Wild Weekend” Part Four of Eight

Cover by Paul Smith!  I imagine they mean, both covers.

The inside credit page has this as the write up –

Sure, she’s seen them before, but never in her darkest nightmares did she expect to encounter them face to face — or to become part of the family!
Face it!  For Meggan things have just gone from mad to worse.

Each part of the Excalibur chapters, follows one main team member.

Meggan wakes up in a parody of the Munsters home.  I was never much of the Adams Family, but I’ve never seen an episode of the Munsters.  I know of the show, but I never been tempted by it. 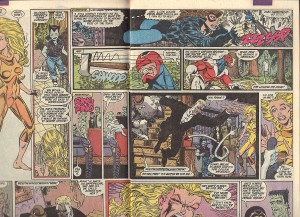 The Munsters are attacking Meggan.  Meanwhile, Shadowcat messing with the mechanics of the world, that is imprisoning the team.

Captain Britain is being attacked by the characters of the Wizard of Oz.

There is a giant explosion and Meggan seems free of her section, she punches a small door open.

The Loony Toons parody characters know that something is wrong, and are instructed to deal with whoever is messing up the plan.

Not a bad use of eight pages, Three sets of two page spreads (like the one above) and the first and last page are proper single page sequential art.

I imagine we will do issue 35 next year, unless we get a good reason to do it, sooner.

Such an interesting concept for a comic series, which I’m all for.  I especially like the idea of these long stories coming to an end and the possibility of what is yet to come. 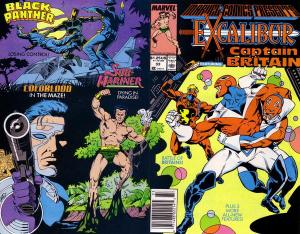 Having a Wild Weekend Part Three of Eight

Captain Britain gets attacked by two individuals wearing his old costumes, just like the cover.  The odd thing is, the costume that is a variation of his current one, makes me notice something.  What is up with his forehead designs?  Those are some weird things on his head, that I’m not sure if I ever noticed before.  Brian’s first costume, I’m not a fan.

Kitty gets into a computer center.  The set-up is more sophisticated than she was anticipating.

The Captains Britain fight is interrupted when a young lady appears.  We begin the Beverly Hillbillies parody.

Namor the Sub-Mariner in a one off story 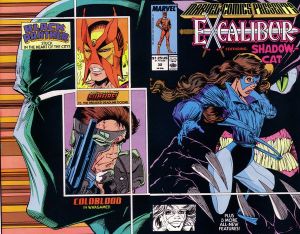 Having A Wild Weekend Part Two of Eight

Look at that wonderful cover by Todd McFarlane.

It isn’t often you get two Image founders involved in a single comic.  I know Larsen, mostly from his work on Spider-Man, Wolverine and of course Savage Dragon.

This story opens with Kitty falling through a tube.  Turns out, some Looney Tunes knock offs have captured Excalibur, including Lockheed.  They threw Kitty away, as she was messing up their machine.

Kitty has to fight Rochester, the Sylvester Cat parody.  Adding to the problem, Rochester is gigantic and robotic.  Which wouldn’t be a problem, except her phasing powers are not working.  She eventually works her way to his top and turns him off.  While looking over her handy work, she sees her reflection.  She us wearing earrings that are inhibiting her powers.  She makes a comment regarding how she never wears earrings, which I have nevet noticed but it is true.

The other stories star :

Sunfire, a done in one