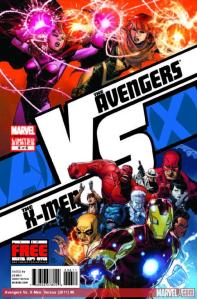 By the time this issue came out, AvX was over so this miniseries had a chance to just have fun with itself.

I own it for the very funny – Spider-Woman vs X-Women (Kinda) via Hawkeye’s imagination.  Because he was dating her at the time. 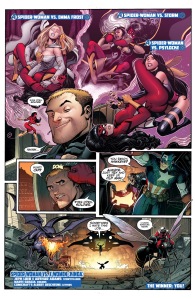 I own the overall issue because of Lockheed on the bottom right corner there.  Who knows why he was included, but I’m glad he was.

The winner is us, because of the Lockheed appearance!

AvX : Science Battle, which I’m including due to us celebrating Ant-Man Month! 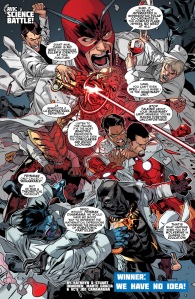 Toad v Jarvis, because Toad was the janitor at the Jean Grey School at this time

The above Spider-Woman v X-Women

Yesterday, we passed our Total Views of our Home Page / Archives, from last year!  So now all of you great visitors are just adding to making next year’s goal harder to hit!  But seriously, thanks to you all for coming to this blog and making it a continued success!  I really appreciate it!

Just the other day, I was feeling pretty good with typing away a review post and realizing how much I enjoy doing it.  I really should have started this blog months earlier but I’m glad that I have this creative outlook now. 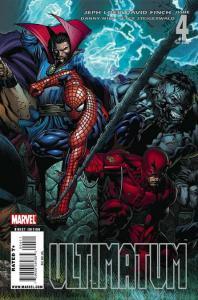 This may be the worst way to end Daredevil Month but that’s just how the order came about.  Daredevil doesn’t appear at all in this issue.  For Daredevil’s fate in Ultimatum, read 131, Shadowcat doesn’t appear in that issue, so I no longer own it.

This cover is part of a larger image.

That is one of the great things about Ultimate Shadowcat, she makes appearances in these Ultimate events.  She will be a major figure Post-Ultimatum, but she was in prior ones as well.

One of the huge criticisms of this series isn’t the death toll but how gruesome the deaths are.  Unnecessarily so.

Inside front cover ad is Hugh Jackman as Wolverine Milk ad.  This is to tie in with Wolverine Origins.

What I like about Ultimatum is, no matter what, Magneto won.  The series starts with him spinning Earth on its axis, causing catastrophic disasters.  The world will never be the same again.  Unless there is a one year time jump and the world has mostly returned to the same.  Except humans have a very real reason to hate one specific mutant.

Heroes who have died in this event, prior to this issue – Dazzler, Wasp, Giant Man, Thor and Nightcrawler.  Thor will come back, eventually.  I’m not sure how, as dead was meant to mean dead, in the Ultimate Universe.  Which for the most part, is how it has been.  Which is why this was a real turning point.

There is a giant explosion and Spider-Man passes out. 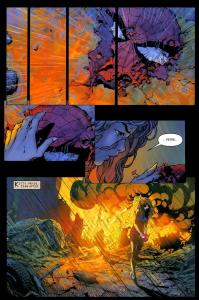 Kitty Pryde.  Soon after.  Poor Shadowcat finds her ex-boyfriend’s mask.   As news reports come out all of the death, Shadowcat makes the assumption that this mask means Spider-Man is dead.

Dormammu is fighting his old enemy, Doctor Strange.  Nice that we get a quick recap of Ultimate Strange’s origins.  He is part of a long line of Sorcerer Supremes but he is the last in the line as he’s still pretty young.  Dormammu has taken the Human Torch prisoner, as well.  Dormammu wraps a cloth around Strange and strangles him, we actually see his head explode and his headless body.

Invisible Woman and Thing show up, too late for Strange but hopefully not to late for her brother.

Lower Manhattan.  Hulk and X-Men.  That Night.  Hulk was trying to help Strange (I’m not sure how) and he is being chased by both the Army and Cyclops and Storm.  The X-Men are leading him straight to Wolverine and Jean Grey.  Hulk recognizes Wolverine from that time he ripped him in half.  Wolverine hopes to not repeat that.  Jean calms the Hulk down, now that he is distracted.  At some point, the Hulk lost his pants.

The White House.  The Supreme Power Universe.  Nick Fury, Exiled Head of SHIELD.  Reed Richards, Doom, Zarda and Arcanna.  Time Unknown.  So this takes place after Ultimate Power, the crossover between Supreme Power and the Ultimate Universe, it ends with Fury over in that universe.  Supreme Power was like the Ultimate Version of the Supreme Squadron’s universe – which isn’t complicated at all.  Arcanna is an Asgardian.

They are there to bring Fury back to their universe.  Well, this is Zarda (Power Princess) universe but I believe we traded her for Fury.

There is an add for Wolverine Origins, the video game, which I highly recommend on either the XBox 360 or PS3, the PS2 version was a lesser version in every respect.

Reed explains to Fury that Magneto tilted the Earth on its axis and now they need him to fix it.  Fury knew something like this would happened without him in charge.  Fury makes Doom explain his part in this.  Damme had Scarlet Witch murdered, so that set off Magneto.  This causes Reed and Zarda to attack Van Damme.  Arcanna gets everybody back to the Ultimate Universe.

Aunt May’s House.  Peter Parker’s (Spider-Man) home.  Kitty Pryde and Wolverine.  Dawn.  This is probably my favorite scene in this event, as this saves Shadowcat from death that the next issue brings.  Kitty and Peter’s relationship also brought her to the main stage and took her out of the X-Men, for a time, which saved me from some bad comics.

The big battle is coming and this is the calm before the storm.  Kitty explains there was a flash of magic light and Peter was gone.  Kitty isn’t sure if he is dead or not. 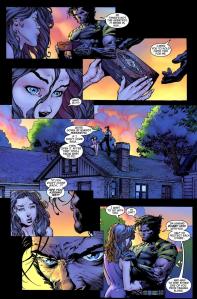 Wolverine gives Kitty a box, if he doesn’t return, she is to open it.  Kitty, being an uncanny hero, wants to be part of the big battle.  Wolverine wants her to stay behind and take care of Iceman.

Finch does draw Kitty way too skinny here but that is a great image.

Wolverine really doesn’t want her to come along as, once this is over, she needs to be part of the rebuilding process.  Kitty is one of the best (I would have said the best, but that is me) and they hug one last time.  Or possibly, for the first time.

Magneto’s Citadel.  Above the Artic Circle.  Morning.  Once again, if someone is quoting scripture, it comes off insane.  Plus, Magneto is narrating to himself so that’s not a good sign.  Angel comes busting through the window and gets a punch in.  Magneto sends Sabretooth to fight Angel and Sabretooth violently steps on Angel’s head, killing him.  Hawkeye fires an arrow into Sabretooth’s right eye.

Magneto is running around with Thor’s hammer (I believe anyone can pick it up, if you can get it away from Thor).  Arcanna wants the hammer back but she brought a big metal sword to a fight with the Master of Magnetism.  She does get a great hit in, in that she slices off his right arm – that was holding the hammer).  He takes the sword from her and slits her throat with it.

She’s an Asgardian, so she is still standing there when Captain America busts through another window, claiming this is over now.  Magneto rushes away.  His path is blocked by Beast, Cyclops, Jean Grey, Hawkeye, Iron Man and Storm – as the issue ends.

Ultimatum is continued in Ultimate Spider-Man 123 (which is a misprint, they meant 132.  Shadowcat isn’t in 123 so I don’t own it but I do own 132) and I own 133, the last issue of Ultimate Spider-Man until that title’s third relaunch and they renew the numbering for the big 150th issue.  Ultimatum concludes in issue five, which I also own.  Then there are aftermath issues, Requiem : Spider-Man / Fantastic Four / X-Men, I only own the X-Men issue.

We’ll get to these issues eventually.  For now, Daredevil Month has concluded.  Come back tomorrow for . . . . AVENGERS MONTH!

On my Wishlist are – the Del Mundo variant of issue 2, McGuinness Variants for both issues 2 and 4. Yes, I only want the fourth issue one because Lockheed and Kitty’s feet are dangling on the top of it. But it would make an awesome connecting cover once I get both of them.

Issue One, I only own for the Skottie Young Baby Variant that had Kitty and Lockheed on the cover.

The Team Ups and Creative Teams in the issues I own are :

1B – Incredible Hulk + Wolverine by Jeph Loeb and Dale Keown

8B – Hawkeye + Deadpool by Christopher Hastings and Reilly Brown

11A – Thor + Magik by Mike Benson and Mark Texeira

11B – Superior Spider-Man + Cyclops by Jim Krueger and Ron Lim

18A – Vision + Kitty Pryde by Jim Krueger and Will Sliney

Once I own issue four it would be

Overall, I like the concept of the title as I was always a fan of Marvel Team-Up, especially once the second and third volumes got away with the mandatory Spider-Man starring role.

Look how adorable that Scottie Young cover is!  Baby Kitty with an even cuter Lockheed.

Love this cover so much!  Baby Thor is there, being ridden by Baby Wolverine.

Inside has two good stories as well.

First one has Captain America, Bucky and Cable.  By Dan Slott and Ron Garney.  Cable and a future Trask offspring are back in time to WWII.  Issue ends with Bucky noticing Cable’s mechanical arm.  Nods to Winter Soldier.

Second story has Hulk and Wolverine, plus cake!  By Jeph Loeb and Dale Keown.  The two Avengers see there is one piece of cake left, then their future selves show up, Maestro and Days of Future Past Wolverine.  They fight to a draw, the future ones go back to see Red Hulk is the President, and he sent them there to kill his younger self.  Not sure if this ever got picked up elsewhere.

The first page summary page has some funny  lines in it.