Exiles : Days of Then and Now 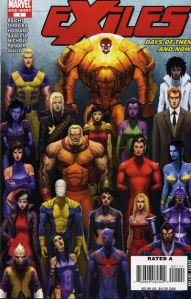 Note : This issue takes place during Exiles 100 – which I will be reviewing soon

Sadly, on April 23, 2015 – we lost artist Francis Tsai.  I only own this issue of his, that he did the cover, and his art work is used in Official Handbook of the Marvel Universe A to Z Update 1, that I plan on reviewing next year.  So great that he got to draw Magik on the cover, that has most members of Exiles, up to that point.  Sadly, Magik nor Cat (who is next to Sabretooth, but I thought that was Psylocke) don’t appear in this issue.

Chapter One : A World Without Heroes

In a dimension where Hulk left his Planet Hulk storyline and took charge of the Annihilation Wave, he brought it Earth.  Most heroes died, trying to stop the Hulk.  Of course, the only hero left is Wolverine.

I should mention that, none of the Exiles appear until the end – this issue is more setting up a concept of the Exiles, as a revolving team.

Two months later, on the same Earth, we check in with what is left of the Xavier Institute.  Quentin Quire (without the pink hair, he is a brunette) is with his girlfriend, Sophie.  Sophie has the power, now, to see glimpses of the future – but only in her dream.  She dreamed that a team known as, The Exiles, will come to save them.  We see who else makes up the refugee heroes – Patriot, Speedball, Mindee & Esme, Julie Powers of Power Pack and Wiccan.  Quentin plans on jumping into the time stream and finding this team of ragtag heroes.

Chapter Two : A Quentin in Time

Quentin Quire lands on a Earth and instantly meets his fellow Rioters – Blob, himself and Beak, on this Earth.  They are all drugged out on Kick.  Quentin takes them down with the help of Nighthawk, who was only a boy from issue 45 of Exiles.  Which I do own but I don’t want to review at this issue, as I don’t want to go down too many rabbit holes in these reviews.

I’ve since read Exiles 100 and there isn’t really much of a tie-in where this issue falls into it.

Nighthawk recalls the adventure from issue 45.  This Earth put up a statue of the Exiles.

The Tallus, that Nighthawk gave to Quentin, tells him to place flowers along a memorial of names.  This is the Earth that Spider-Woman (Mary Jane) who was a member of the Exiles.  First seen in Exiles 20, which I also own.  Turns out,this Mary Jane died in Spider-Verse 1.  Mary Jane talks about her former lover, Sunfire.  Luke Cage, who has the powers of Iron Fist, also tells the story.

There are some ads, that helps remind me of the era.  Spider-Man 3 was coming out and Ultimate Secrets, an Ultimate Handbook, came out in January 2008.  I own it.

Quentin meets Jennifer Swenson, Spitfire.  She wants to destroy the armor that her father makes, like an Iron Man version of the Sentinels.  Apparently, this is from New Universe, seen during Exiles 72 & 73 (I don’t own these) – if I’m reading Marvel Database correctly.  Quentin tries to convince Jennifer to use the armor for good, she doesn’t want to be a hero.  The military shows up and tries to kill them.  She flies away with Quentin, and decides that being a hero isn’t all that bad.

In the Crystal Palace, the Time Broker (the fake face of the bugs who actually operate the palace) greets Quentin Quire.  Quentin wants the Exiles, and the Time Broker tells him that he has already met them.  If Quentin agrees to join the team, their first Earth to save will be his original one. He super agrees and disappears.

The New Exiles show up, they fight off some giant green bugs.

Blink and Sabretooth are observing this new team.  Blink isn’t sure if this was enough.  The heroes that they put on the Planet Hulk Annihilation had died, so the replacement heroes are not going to be running into duplicates.

The issue ends with a fun reveal that Blink’s Time Broker (who looks like an overweight butler) wasn’t the same as Sabretooth’s when he was part of Weapon X (which is a lousy evil opposite of the Exiles).  their time broker looked like a sexy blond secretary.

There is an Exiles handbook profile.

There is a nice Cover Character Guide –

from Left to Right

Once again, such a great cover, thank you Francis Tsai, you will be missed, good sir!