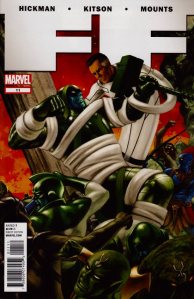 Whenever I see this cover in my cover collection on comicbookdb.com, I see it as Doctor Doom v Reed Richards, but it is Reed v Ronan the Accuser.

It is pretty maddening how difficult this series is to Google!

I own this for the two Kitty appearances!

Okay, I will try to recap the Previous On as Hickman had a bunch going on and I only read this issue and issue 600 and most of it just went over my head as I’m pretty sure I just read the two pages Kitty Pryde was on and moved on.

So apparently there are a bunch of Reed Richards who came together to make the universes better.  They want to bring on something called, The War of the Four Cities.  The Inhumans captured two of the last four of them.  Ronan the Accuser is the ruler of the Kree Empire.  Thing, who is an Avenger, has brought his new pals and various other heroes together.

Onto the issue.  Baxter Building.  oh, and the title is FF because with Human Torch believed dead, they changed their name and uniforms (to white) and now they are Future Foundation.  Part of the FF goals is that they are running a school.  Franklin and Leech are students of the school.  Everyone had a school during 2011.

Franklin and Leech are using walkie talkies.  Their codenames are Hyperstorm and Kid Incredible.  I wonder if Franklin going by his possible son’s codename worried anyone.

There is an ad for Spider-Man Edge of Time, which I still haven’t played.  If they went with Noir instead of 2099, I would probably have bought it.  They even brought over the 2099 free fall levels which I hated in the Shattered Dimension game.

Other students are Alex Powers, of Power Pack, Dragon Man (who isn’t a simpleton), Valeria Richards and three Morloids.

There is an ad for the video game, X-Men Destiny, which I heard had an item with Shadowcat’s name in it but that wasn’t enough for me to buy it.  Pretty cool that Mike Carey wrote the story for it.  I meant to buy it when it became a twenty dollar game but by then, my precious PS3 had Yellow Light of Death (YLoD).

The students are building something.  Reed passes by, takes a glance and enters the room.  Reed talks to his daughter and Val tells him that they expanded the teleportion capabilities to cover three floors instead of the one.  Val is concerned as the Baxter Building isn’t just the home of the Fantastic Four anymore, they have a school there, people work in the rest of the building, protective measures need to be taken.

Attilan.  Diablo (with a narly face burn) and Thinker are the prisoners of Ronan and the Inhumans.  Ronan is married to Crystal, so he’s husband number two for her.  Good for her, now she is the Queen of the Kree Empire.  Or whatever female title one has for what Ronan is.  Ronan has plans for the two Reed Richards that they have prisoner.

The Other Side of Zero.  The Cult of the Negative Zone.  This bald guy with a minus symbol on his forehead, is contacting Annihilus.  The guy informs him that they are succeeding in moving amplifying devices, called Obelisks, that expands the bridge between Earth and the Negative Zone.  They are trying to get access to the biggest portal on Earth, which is in the Baxter Building.

The Baxter Building.  Reed is about to start a speech but takes the time to apologize for his ignorance, he thought he could handle the situation by himself, he should have reached out once the situation got as big as it did.

Here is a larger version :

Nice of Reed to call the gathered heroes the best group of heroes the world has to offer.

She-Hulk takes a moment to chat with Susan about Thing being back with the team.  Thing is happy to hear Susan take responsibility for running him off the team in the first place.  Susan then tells Jenn that it would be nice for Ben to clean the dishes from time to time.  Grimm shouts that he clean the dishes out last night.  Sue kisses him on the check, she is glad he is home again.

Spider-Man asks them to be quiet, Reed just explained how everyone is going to be killed.  Captain America compliments Reed for a good speech.

The Forever Cit.  Protectorate of Attilian. Ronan’s big plan for two Reeds is to combine them into the Supreme Intelligence, so that guy is alive again. He wants to know where his armies are. 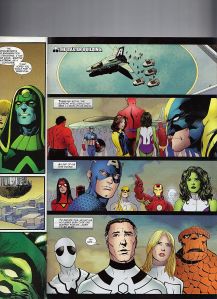 The Baxter Building.  Shadowcat gives Wolverine a look of comfort.

The final page is the entire Kree Spacefleet in the skies of Earth, so it is very much on.

This issue leads directly into Fantastic Four 600.  Which we will review in a couple days.