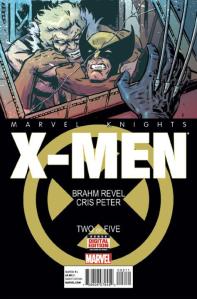 We find Logan and Sabretooth in the cabin, and they of course start fighting.  Logan sees Silverfox.  Rogue comes in and starts fighting Sabretooth as Logan goes exploring.  Once he is out of the room, Rogue meets some familiar faces.

Rogue sees her Brotherhood of Mutants, Sabretooth shapechanges into Mystique, also Blog and Pyro show up.

Logan enters another room and finds a slew of Hellfire Club Guards.  Kitty is outside with Krystal.  They start running into the cabin.

Rogue is fighting those three, we also see Toad, Avalanche and Sauron are entering the fight.

Logan meets a new gal, we learn her name is Darla.  She has a very interesting and spooky power.  A power that has very tragic and heart breaking ramifications, also the way she has learn to turn her power off?  Also super horrible and tragic.

Darla picks up her pistol, aims it at Logan, and fires.  The bullet goes straight into the floor.  We see a green skinned male, with a red sweater, shouting, please don’t kill me.  He is pleading with his life.  Darla realizes her power has gone completely out of control and cuts herself.  This makes all the illusions go away, including the green mutant.  Who looks like a normal looking Leech, if such a thing exists.

We cut to the Sheriff, who is giving the towns folk drugs, so they give him guns.  They are complaining about those who get the guns, some sort of crazy religious group who stay to themselves and who only want to be left alone and to be well protected.  The sheriff, Jasper, tells them not to worry, as they keep getting their drugs and that should make them happy.  It is a very odd town.

Then we see that green mutant, pleading for his life again, and then he gets shot in the head.  Logan, naturally thinks Darla shot him, like how she shot at Logan.  She does not quite deny it.  She just wants her life to end.

The X-Men get Darla and Krystal to a local eatery.  Krystal and Darla start chatting, I get the impression they don’t know each other from living in the same town.  The X-Men sit at their own table, the tables are small, so it isn’t like a bigger ‘inclusive’ type of exercise.  Rogue wants to try to learn what Darla’s power is and try to teach her how to live and hone her power.  Logan thinks she is a killer and should be dealt with.

Krystal gives Darla a bunch of drugs and Darla take a giant handful, and her power starts going crazy out of control.  This one guy sees his old dog, and then his old girlfriend – upsetting his current girlfriend.

Wolverine walks away from Rogue and Kitty.  Kitty tries to find a middle ground.  She doesn’t get much to do this issue, hopefully next issue she gets a proper moment to shine.  We don’t even get a glimpse of Ogun or Emma.

Revel impresses me again with how clever he is.  He gets this opportunity to work with the X-Men and creates this story and finds a way to draw every thing related to the X-Men that he can ever want to do.  Darla though, is an amazing creation that I would like to see more of, as her power is very interesting and tragic.  I can’t stop thinking about it and its ramifications.

It has been nearly two weeks, and I am still thinking of the potential that is Darla.  Such a good character.