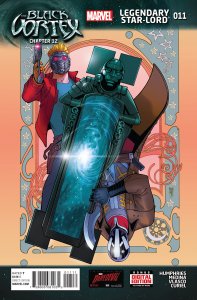 Humphries is officially on my list of favorite Shadowcat writers.  Space isn’t Kitty’s jam, we all know that to be true.

The Planet Spartax.  Magik is doing her best to hit and run the Slaughter Lords, keeping them off balance.

The new breed of baby Broods are about to eat the Spartaxians’ brains.  Storm is trying to keep them frozen but the Slaughter Lords find her.

Kitty keeps narrating that she has a Plan B, but she doesn’t like it.

Captain Marvel arrives with the Black Vortex, so now Kitty can start her plan of action. 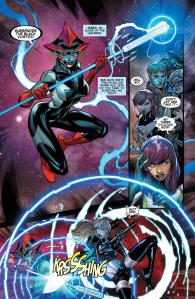 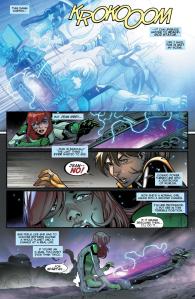 That . . . fight, seems to generous of a word.  The Black Vortex falls and Jean inches towards it.  She is prepared to make a sacrifice.  Kitty narrates that X-Men don’t think twice of choosing between saving an entire planet or one’s self.

Kitty hasn’t told anyone what Plan B consists of.  Jean’s upgrade involves her getting a Magik-like head garb. 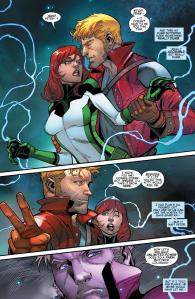 Quill pulls Jean away from the mirror, it isn’t going to be her this time.  Jeans can’t handle cosmic upgrades.  He looks into the Black Vortex and sees a Booster Gold level version of himself.  His father is super proud of him.

Lord of Stars is surrounded by women, but not the one that he wants.  He punches the Black Vortex away.

Quill apologizes for not making the ultimate commitment, Kitty smiles, as he never was suppose to.

Gara is about to tell them all a little story.

Gara doesn’t care about Spartax, she wants the mirror gone. 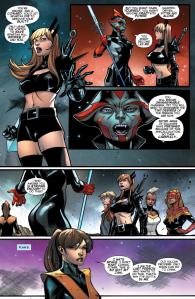 Magik points out that foolish Gara is being.  Gara questions if Magik has what it takes to not be tempted by ultimate power.

Kitty restates her mantra.  She hates space, she doesn’t want the power cosmic.  She should be the person who gets the upgrade, last. 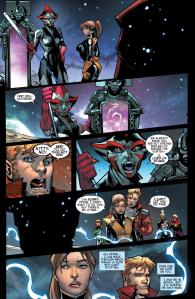 Kitty stands before the Black Vortex, and Quill tries to convince her otherwise.  It isn’t going to work.

Issue ends with a hint of what Cosmic Shadowcat looks like.  Much better than what was hinted at in the first few issues.

Next, the final chapter of Black Vortex!  All roads lead to Omega!