New World According to Peter Parker, Part Four of Six

I will be reviewing issues four and six of this storyline, as we conclude Jessica Jones month.

So this volume takes place right after Ultimatum, New York City is quite happy with Peter Parker and it appears everyone is living at his house.  Peter is dating Gwen and the Kingpin was killed by Mysterio.

The Mall, Closing Time.  Mary Jane and Lucy are walking away after a long day at work.  Brad comes running after Mary Jane, Lucy heads off.  Brad is their boss and he decides that it is cool for a freshman in college to date a sophmore in High School (it isn’t).  She starts trying to politely turn him down with this dumb face with a gun strolls up.  He also wants to date Mary Jane (I don’t get it, either) and Brad runs once a gun is brandished.  Mary Jane starts trying to turn this guy down.

There is an ad for Kia Motors The Soul, so go out and get one of those! 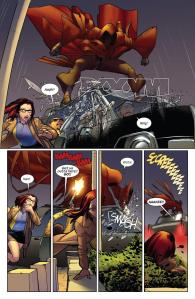 Just then, the Shroud comes crashing down onto the car.  The gunster opens fire but the Shroud isn’t affected by bullets.  We will learn who the Shroud is in issue six.  The Shroud gets the cover treatment too!

The Shroud makes very short work of the gunster.

The Shroud has a private moment with Mary Jane and decides to open up about how stupid criminals are.

Mary Jane goes into reporter mode, wanting answers.  Mary Jane figures that the Shroud must be her age and most likely, a fellow student at her school.  The Shroud points out that Mary Jane hasn’t said, thanks, so she does.  I do like how Mary Jane gives the Shroud a chance to provide a superhero name.

Peter Parker’s Home, Queens.  Johnny is explaining to Peter that he lives there now.  Peter can’t believe it and has so many questions.  Aunt May loves having a full house.

There is an ad for Nissan’s Cube.

Johnny isn’t thrilled about having to do chores, having to learn what they are.

Midtown High School, the Next Morning.  Mary Jane talks to Peter, telling him there is a new superhero in town, she saw them last night.  Peter mistakes “saw them” as her meaning that she is dating them.  Mary Jane isn’t sure if the Shroud is a boy pretending to be a girl or a girl pretending to be a boy, a fake voice is differently at work.

Peter starts to quiz Mary Jane on what the Shroud’s powers are and such.  It takes him a bit before he comes around and makes sure that Mary Jane is okay.  She is quite shaken up and starts crying that she attracts losers as she is a loser and regrets breaking up with Peter.  Gwen is lucky enough to overhear this.

Apparently, Mary Jane has been turning boys away, as she has been pinning for Peter.  Gwen is cool and Mary Jane is a mess, so Peter wouldn’t even think about backsliding.  Gwen wants to have some real girl talk with Mary Jane.  Gwen and Peter want to be friend with Mary Jane but she doesn’t return any of their calls.

Another plus in the Gwen column?  She lives under the same roof with Peter, so that’s pretty nice.  Though Aunt May has a no “hanky panky” rule.

Jessica Jones sees her friend, Mary Jane, and starts talking to her.

Jessica wants Mary Jane to be her reporter, as the Hulk is destroying the Queens-borough Bridge.  Peter tells his ladies that he has to go, and Mary Jane and Gwen say at the same time – Don’t Get Hurt!!  So that’s going to be awkward.

Spider-Man gets to the bridge and tries to calm the Hulk down.

There is an ad for the very excellent Astonishing X-Men Motion Comic, for the Gifted arc.

Spider-Man starts going on the attack, except that the Hulk is only a mere hologram.  There is a huge explosion and we learn that Mysterio was behind the charade.

We will learn later in Spider-Men that this Mysterio is really the Proper Mysterio and this is his avatar, which is fun that isn’t even hinted at here.

The Dark X-Men miniseries is starting around this time, as this is printing around the beginning of the Utopia era of the X-Men.