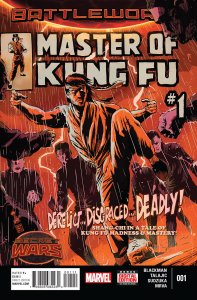 I don’t have much experience with Shang-Chi.  I’ve read the few appearances he had when he was on the Marvel Knights team and I’ve read the various team-ups he has had with Spider-Man over the years.  And now, this series.

Issue opens with some world building, to explain how we got here.  Which is nice that Doctor Doom saw fit to include thousands of years of back story, for this region of Battleworld called – K’un Lun.  All of the Great Masters went to war.  Every school was represented – Red Hand, Panther Clan, House of the Jade Tiger, and the poor bastard from the Spider Cult, is it worth being included if it is only to be insulted?  I imagine some Spider-Fan would have been offended if the Spider Cult was left out.

The battle boiled down to Ten Rings (which makes me think of the Mandarin) and the Iron Fist – who we should mostly associate K’un Lun with.  The two Masters practically destroy the region.  They decided to make a truce.  They created a tournament called, Thirteen Chambers, the winner will rule K’un Lun.  Shang-Chi’s father – Zheng Zu – has been the ruler for a hundred years.  The next tournament of Thirteen Chambers is about to begin.

We start the present day story with a very drunk, Shang-Chi, in the park with his dog.  This Shang-Chi is a very funny drunk.

Three goons from the Ten Rings arrive to escort Shang-Chi out of the park.  Shang-Chi jokes that they are trying to get rid of the dog.  They threaten to burn the pet and Shang-Chi jokes that he is the pet to the dog.  A bald young lady witnesses the commotion.  As she watches, Shang-Chi starts taking out the goons so easily.  Even drunk, he makes short work of them.

The lady runs off to tell Callisto what she was watching.  Callisto calls the young lady, Kitten, so we know this is the Shadowcat – which makes sense as we’ve seen from the promo piece – 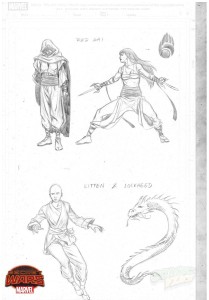 Kitten tells Callisto that someone is finally fighting back.

The goons finally recognize him as Shang-Chi.  The audience can’t believe he has return!  We see a very pale fellow, who is Caliban.  Caliban reveals all of Shang-Chi’s nicknames or titles – The Rising Spirit / Son of Emperor Zheng Zu / Seven-Time Winner of the Dragon Cup.  He is cut off after saying, “Nine-Time Winner of” so we don’t learn that one.  He does finish with the reason why no one has seen Shang-Chi for a while.  He is wanted for the murder of Lord Tuan, Great Master of the Iron Fist.

Shangi-Chi knocks down the goons.

The goons start getting up, and Shang-Chi asks them to stay down.  He tells them that he is no longer a killing man, so now he has a weakness and they press him on it.  Just then, this region’s X-Men (I’m not sure what they are going to be called here) show up to even the score.  Lockheed is the dragon in green!  I rather he was purple but I guess green is a more traditional color for dragons.

This page, we get Callisto calling him by his name in this region, Lock.  Which is all the confirmation I need.  You can add this character to your favorite list over at comicbookdb! 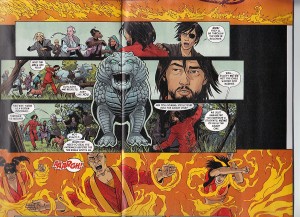 Lock surrounds the goons with high flames as the heroes make their escape.  Callisto tells Shang-Chi that they are outcasts, which works for who the X-Men are.  Outcasts and rejects, which also works for the Morlocks.  They all go inside a statue to their secret hideaway.

The goons try to catch up and once they realize that they lost Shang-Chi, they know they will have to beg for sweet mercy.

The Halls of the Red Hand.  Red Sai is also recruited.

The Citadel of Emperor Zheng Zu.  The Emperor is not happy that his son has returned to K’un Lun.  Iron Fist is okay if Laughing Skull and Red Sai kill Shang-Chi’s accomplices but he wants the honor of killing Shang-Chi, as he killed Iron Fist’s Master.

Hopefully we keep getting lots more of Kitten and Lock throughout this series.