Delhi, India.  Cyclops is confronting Mystique, who is on a bit of a vacation from herself.  She is enjoying being a Bollywood star.  Mystique starts playing mind games, to try to seduce him.  She takes the forms of Emma, Dark Phoenix and Wolverine.  Scott has had sex with two of those three.

Scott wants to know why Mystique has been so all over the place, since Xavier’s death.  There was a time when she was the villain of four different titles – all at the same time.  Get it together, Mystique!  She would be committing minor crimes in one title and these massive month long plans.

The first of two pull out house ads for Secret Wars 2015 3 – of the titles featured, I’m only excited about Star Lord and AoA Kitty Pryde!

Dazzler wants help in seeking out Mystique.  Dazzler will help but she wants full clean records for the New Xavier School students.

Mystique and Cyclops.  Mystique asks Scott why he hasn’t brought up their affair together, which caused me to pause.  He says it is because he wanted to keep this conversation on point but this is all she needed to know that this is not Cyclops.

Scott has been Dazzler, this entire issue!  The New Xavier Students and Dazzler make short work of Mystique. 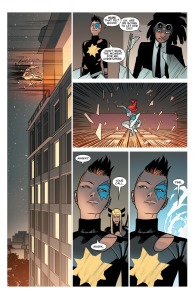 Mystique is pushed through the window and will surely die.  Dazzler asks Magik to save the foe.  Poor Magik, this is Bendis’ only role he uses her for.

The second pull out house ad for Secret Wars 3, has several more titles that I’m interested in – Giant Size Little Marvel : AvX, Years of Future Past and X-Tinction Agenda.

Magik keeps her word but makes sure that Mystique has a rough drop.  Mystique recognizes that Dazzler is better than her as she would have let Dazzler die.

Dazzler gets on a stage, later, and sings.  Maria Hill, after the show, admits to being a huge fan of hers.  Dazzler needs to be the mutant liaison as she is better suited for it than anyone.

Greenvich Village, New York City.  The former students of Cyclops are all outside.  Celeste reads Hijack’s mind and wants him to reveal his thoughts to the group.  He has an idea that they don’t need to be the X-Men but they need to do something.

The answer will be in Uncanny X-Men 600, which is strangely going to come out after Secret Wars 2015’s final issue instead of properly being done before the event.  Which is so odd as Marvel should be going with a fresh start with the X-Titles instead, they are going to launch with the final issue of Bendis’ X-run and that is all he will be contributing to the line.  Seems so dd to me.